Schools across Ontario will be collecting race-based data in an effort to close the gaps in achievement and well-being between students of different backgrounds.

A total of 15 boards, including the Toronto District School Board (TDSB), have been collecting race-based data for years, but the province would like the practice to expand to all boards, starting with students in Grade 4. Boards will also be encouraged to collect data on students' ethnicity, religion, sexual orientation, gender identity, disability and parents' socioeconomic status.

Data collected by the TDSB has shown that a disproportionate number of black students are suspended and expelled from school compared with their peers, they are less likely to graduate or pursue postsecondary education and they are more likely to be streamed into applied courses versus the more rigorous academic ones.

"We have to ensure that our system of education supports all students," Education Minister Mitzie Hunter said at a news conference on Thursday announcing the province's new three-year plan for education equity. "Where there are systemic barriers that do affect the outcome for students, we have to look at those barriers."

The announcement comes just two weeks after researchers at York University delivered a report to the province that called for the collection of this data. Carl James, a York education professor who co-authored the report, said patterns in data about student success or discipline can reveal failures in the system.

For example, during the 2011-12 school year (the last year for which data is available) 8.6 per cent of black Grade 9 to 12 students were suspended in the TDSB, compared with 2.9 per cent of white students.

"We cannot see these things as lodged inside individual students, but we have to ask questions of the programs or the institutions that might have created the situations we're trying to address," Dr. James said.

Anthony Morgan, a human-rights lawyer and a prominent advocate for Toronto's black community, said the collection of race-based data could bring about positive change, but he had concerns about students' privacy: Who would have access to the data and how would it be reviewed? He said it is crucial that the province communicate its intentions clearly to parents.

"If the government does not take seriously how it plans to gather the data, what it plans to do and who has access to that information, they might get a lot of resistance that they shouldn't get," he said. "Especially if a family has a child they feel has already been hard done by the system. There's already a trust gap that they'll have to address."

The TDSB says the data it has collected on race and ethnicity in the past decade has been used by individual schools to select classroom materials that better reflect students' races and cultures and help improve communications between staff and parents. It also has led to the creation of initiatives at the board level, such as the Black Student Achievement Advisory Committee.

Another part of the province's plan on education equity is the decision to eliminate streaming in Grade 9, the point at which students decide if they want to pursue academic courses or applied ones. The former are more academically challenging and are required for admission into many postsecondary institutions.

Assistant deputy education minister Patrick Case pointed out that from the data already collected in the province, students from black and other non-white communities are overrepresented in applied programs.

Since 2004, the Alberta government has included a voluntary First Nations, Métis and Inuit self-identification question on all school registration forms and has used responses to track the achievement of students from these groups. Lindsay Harvey, a spokesperson for Alberta Education, said the data has helped school authorities understand which programs are working and where additional resources are needed. The province's education ministry provides extra funding of $1,178 per self-identified Indigenous student to schools.

While 83.2 per cent of all Alberta students completed high school in the 2016-17 school year, only 59.1 per cent of First Nations, Métis and Inuit students did. But the province points to a steady decline in the annual dropout rate among Indigenous students over the past five years as a reason to continue investing in improving student success. 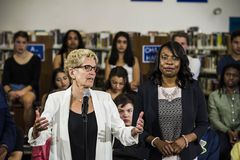 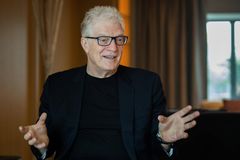