After nearly two days of marathon bargaining, including a middle-of-the-night snag that nearly derailed the talks, Ontario's English public high-school teachers reached a tentative agreement in the early hours of Thursday morning – the first good piece of teachers' news after months of simmering labour unrest.

For the province's high-school students, the deal could mean "business as usual" when they return to classes in three weeks, said Ontario Secondary School Teachers' Federation (OSSTF) president Paul Elliott.

The union negotiated a three-year contract, which expires in August, 2017. A year in the making, the tentative contract includes a small salary increase for teachers, according to one source close to the negotiations. A senior government official says it "is consistent with the government's net zero bargaining framework."

Negotiations are taking place under the mandate that public service contracts must be "net zero," meaning any wage increase must be balanced by taking away something else. Premier Kathleen Wynne has promised to wipe out Ontario's $8.5-billion deficit in two years, and holding the line on wages is part of her plan.

This is the first tentative deal between a teachers' union, the province and the school boards under the new and controversial two-tier bargaining process – but it does not signal labour peace for Ontario's two million students.

The Ontario English Catholic Teachers' Association has talks scheduled over the next few days, but it is now in a legal position to strike and has begun a work-to-rule campaign at one of its schools in Northern Ontario.

The 76,000-member Elementary Teachers' Federation of Ontario doesn't go back to the bargaining table until Sept. 1, and president Sam Hammond released details of the union's new work-to-rule campaign Thursday.

In the case of the OSSTF, Mr. Elliott is presenting the tentative deal to his union leaders Friday. If it is accepted, it will be taken to the full membership for a vote after Labour Day.

Ms. Wynne told reporters Thursday this was a "very significant and happy day in terms of getting our kids back to school." Union officials say the Premier was critical to the breakthrough after she became personally involved last month, meeting with union leaders and reinforcing the message that she wanted a negotiated settlement.

She had said it was her number one priority this summer to get a deal to ensure students and teachers were back in the classroom for the start of the new school year. Her office was part of the government negotiating team.

"It's been a challenging negotiation … but we've reached a tentative agreement. The fact that has happened means collaboration prevailed," she said.

Mr. Elliott said a breakthrough came when the issue of giving school boards more latitude over class size was dropped. "That really opened the door for us to really get into it," he said in an interview. "As long as that remained there it wasn't going to allow us to get into any fruitful discussions. There wasn't any place for us to go."

The OSSTF and the province had not met for three months when they finally sat down together at a downtown Toronto hotel early this week. The talks came close to going off the rails. A source close to the negotiations described a "hiccup" between the sides Tuesday night when there was a sense on the union side that the government was not focused on getting a deal. But after a break, the talks got back on track and an agreement was signed at 5:30 a.m.

This is the first time the province, schools boards and teachers' unions have negotiated under new legislation passed last year. It divides the process into a parallel set of talks. Issues such as day-to-day working conditions are considered local and are negotiated between the teachers' local bargaining units and the school boards. The other issues, such as wages and class size, are negotiated at the so-called central table where the province sits.

The OSSTF tentative deal was reached at the central table. Mr. Elliott is hoping that it will "open the door" to getting some local settlements. In addition, 25,000 of his 60,000 members are support staff and are trying to negotiate an agreement.

Mr. Elliott believes the process should be reviewed. "This isn't a thick deal. There's not a lot of pages," he said about the tentative contract. "When we look at the issues, there is no reason it should have taken this long." 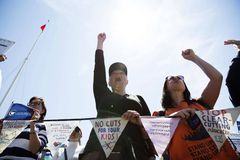 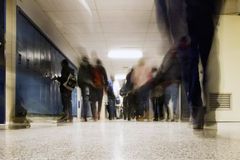 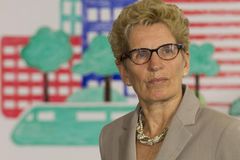