The Ontario government and its public high-school teachers' union plan to resume discussions later this week on extending the current contract – giving the Liberals another chance to buy a degree of labour peace during an election.

An internal memo sent to teachers and support staff on Monday, a copy of which was obtained by The Globe and Mail, said the Ontario Secondary School Teachers' Federation met with senior government officials and have since agreed to reopen talks on extending the current collective agreement. The move by the OSSTF comes about three weeks after the union said talks with the government had broken off.

The Globe recently revealed that the Liberals had quietly approached the OSSTF about a contract extension, which would have involved opening up the treasury so that teachers do not strike before the provincial vote, expected in the spring of 2018.

Paul Elliott, president of the OSSTF, declined to comment on Monday on restarting talks with the government.

Education Minister Mitzie Hunter said in a statement that she was "pleased that the parties have agreed to resume discussions."

A spokesman for the Ontario Public School Boards' Association, a party at the bargaining table, said talks are planned for later this week.

All collective agreements with education workers in the province are to expire next August, and even a one-year contract extension would give the Liberals some labour peace in the long run-up to the election. The last round of negotiations were difficult, as the OSSTF unleashed strikes at various school boards.

Only after The Globe revealed the government was in discussions with the OSSTF did the Liberals confirm that they had offered contract extensions to all unions that were part of a lawsuit against the province over Bill 115, a 2012 piece of legislation that imposed contracts on education workers and suspended their right to strike.

The OSSTF, the Elementary Teachers' Federation of Ontario and the Canadian Union of Public Employees, among others, won a court ruling earlier this year deeming Bill 115 unconstitutional.

The unions were discussing compensation with the province; the contract extension was an option the government put on the table.

The Catholic teachers' union and the French-language teachers' union were not part of the lawsuit, but both groups were invited by the government to discuss a contract extension.

Ms. Hunter said in a statement that talks with the Association des enseignantes et des enseignants franco-ontariens (AEFO) have been productive.

"We are currently in the process of finalizing language," she said.

AEFO president Rémi Sabourin was vague on whether an agreement in principle was reached with the government.

"It is AEFO's understanding that as long as all parties involved in discussions have not signed an agreement, no deal has been reached and talks are still considered to be ongoing," he said. "That being said, we will advise our members first if there is any development in the discussions and if and when a deal is reached."

The current agreement, reached last August, ended a tough series of negotiations, during which the OSSTF held strikes at school boards in the Toronto area and Northern Ontario, and the government legislated teachers back to work.

Wrestling a deficit, the province insisted all labour deals be "net zero," meaning something must be cut to offset the cost of raises.

But Premier Kathleen Wynne recently indicated that she was ready to loosen the purse strings for the next round of talks with public-sector unions.

The Liberals need to keep a strong relationship with teachers' unions, in part because teachers are key members of the party's political base and in part because no labour disputes draw more attention than those involving schools. 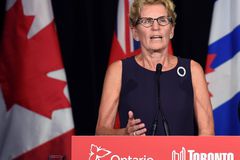