A shortage of French-language teachers so pressing that at least one school district has begun offering incentives designed to lure educators from other provinces has hit the federal radar.

The government pledged in Tuesday's budget to address the "recruitment and retention of teachers" who teach French and English as a second language, a move that is being lauded by parents but it remains unclear what it would include.

French immersion is so popular in many parts of the country – enrolment has climbed about 20 per cent between 2011-12 and 2015-16, according to Statistics Canada – that school boards say they struggle with reconfiguring classrooms and finding qualified teachers.

Ottawa's funding commitment to address the shortage of teachers is one component of a five-year action plan that would cost $400-million and go toward strengthening minority communities and promote bilingualism. Canada's Heritage Minister, Mélanie Joly, said in an e-mail to the Canadian Parents for French (CPF) and other stakeholders that the new plan would be unveiled in the coming weeks.

Nicole Thibault, executive director for the non-profit CPF, said her group has been signalling to the government that this was a priority.

"There is a high parental demand for access to French-immersion programs and this financial support will enable school districts to provide quality programs across the country – by retaining and recruiting FSL teachers, by supporting mobility of teachers to districts in need," Ms. Thibault said in an e-mail on Wednesday.

Enrolment in French-immersion programs has steadily increased in Alberta and British Columbia for 15 consecutive years. Parents in some B.C. school districts line up outside school doors to ensure their children can get a spot in the program.

In Ontario, where demand is high, school boards have reported difficulty in addressing demand because of teacher-shortage issues. Some boards have put a lottery system in place to contain the exploding growth.

Adrian Keough, director of instruction at the Vancouver School Board, said the shortage of teachers has forced the district for the first time to offer a $1,500 moving allowance as an incentive for out-of-province educators. Staff at the board are also looking at how they could help new recruits find temporary housing in the city.

"We've had to really add new strategies to our recruitment," Mr. Keough said on Wednesday. (The incentives are also being offered to non-French-language teachers as the province grapples with hiring more teachers because of a recent Supreme Court of Canada ruling.)

The Vancouver school district has wait lists for its French-immersion program. Despite that, it had 136 fewer French-immersion spaces for kindergarten students this school year. The decision to cut spaces was mainly because of the Supreme Court ruling that required smaller class sizes in B.C. schools, ending a long-standing dispute between teachers and the provincial government. But Mr. Keough said a teacher shortage was also to blame. He said the board still has 12 vacancies for French-language teachers, and that he is anticipating a further shortage in September.

"We would love to expand our programs, but at this point we don't have confidence that we can expand. We cannot currently meet the demand for families that want to enroll in French immersion because of the shortage of French-immersion teachers," he said.

Glyn Lewis, executive director for the Canadian Parents for French for B.C. and Yukon, said that almost every school district in the province is competing for French-language teachers. Some will even offer teacher candidates contract positions upon graduation while they are still studying at university.

Mr. Lewis said he will be waiting to see how the federal government addresses the shortage and how much it allocates to the recruitment of teachers.

"I think the message got through to them that there is a really huge problem," Mr. Lewis said.

"If there's anything we need to do to promote bilingualism in Canada, we need to have qualified French teachers in classrooms." 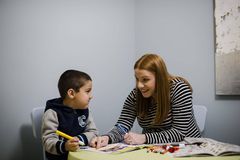