Postsecondary education in Alberta is one sector that appears to be booming from the bust in energy prices.

Amid thousands of oil-patch layoffs and a wider economic slowdown, many professionals are exchanging their briefcases and welding sticks for knapsacks and pencils to head back to school.

Enrolment skyrocketed this fall at Bow Valley College in downtown Calgary, a city that has been hit hard by the wave of layoffs. Fall registrations are up by 11 per cent to their highest level in five years, said spokeswoman Nicole McPhee.

Unlike universities, colleges can be more responsive to changing economic conditions because their programs are shorter, she said. "We work really fast to get students in and out quickly."

The college's one- and two-year diploma and certificate programs can be more readily adapted to the needs of the labour market than university degree programs, which go through a long approval process.

"We work really closely with industry to find out their needs," said Ms. McPhee. "Right now, health care is a huge growth area."

With an aging population and in a province whose economy is heavily reliant on cyclical resource prices, more and more people are turning to the health sciences for job security. Bow Valley's more popular programs amid the slump in oil prices are its 12-month pharmacy technician program, a practical nurse diploma program, and a health-care aide certificate program.

Ms. McPhee expects Bow Valley to play a significant role in retraining and retooling the city's many displaced workers.

Glenn Feltham, president of Northern Alberta Institute of Technology (NAIT), believes overall enrolment will be up for the year despite declines in energy-related programs such as NAIT's petroleum engineering technology diploma.

"While there may be some institutions, because of geographical location, that are maybe more negatively impacted, our biggest issue is still going to be how to manage the growth," he said.

"Sometimes it's hard to envision in other parts of Canada the nature of our economy. … We will always have cycles and it's important for our entire province, including postsecondary, to act appropriately during the ups and downs."

For NAIT, that means keeping focused on long-term needs.

"My best guess is we need to grow over the next five to 10 years, and we need to grow a lot to meet labour market demand. Even if we are slower in recovery, I still think that NAIT is going to be hard-pressed to meet all the [future] demands for polytechnic graduates."

NAIT's application-to-student ratio continues to increase year after year. In 2014, there were more than five applications for every seat available in the applied sciences and technology department; 4.28 in trades and construction; 3.59 in business and 3.18 in health and life sciences.

"I've been in Alberta during past ups and downs and I think we have a far richer economy today that is far more capable of managing those ups and downs," Dr. Feltham said. "I also believe institutions and colleges and universities are all incredibly well-positioned to continue to build that human capital."

In the meantime, Dr. Feltham says NAIT is reassessing its strategies and trying to understand what the implications of the down cycle in today's economy will mean for the different career training programs offered by the institution.

Alberta's postsecondary institutions have long ridden the roller-coaster ride of commodity prices, as the province relies on royalty revenue for its operating budget, which in turn affects the size of provincial operating grants given to colleges and universities.

In its first budget delivered last month, the new NDP government presented mainly good news for advanced education, restoring a 1.4-per-cent cut to postsecondary institutions introduced but not passed in the last Progressive Conservative budget. Moreover, the NDP has promised to increase the base-operating grant by another 2 per cent.

Things are less sunny at Keyano College, located in Fort McMurray, the heart of the oil sands. This spring, the college was forced to suspend several low-enrolment programs, cancel co-op programs, reduce the frequency of courses and downsize by 18 positions.

"So, it's not the Alberta story," says Katherine Koch, vice-president academic. "At some colleges and institutions, the registrations are up because people have gone back to school. Our work force leaves the city if they're unemployed. They go back to where there are other jobs and to where the economy is more diverse."

The college is reassessing its strategy, particularly around new programs in development. Ms. Koch believes some initiatives will be delayed for a year or two while other programs are holding their own, such as the new art and visual design certificate program launched this year.

Keyano also started a degree completion program, announced in October, in conjunction with NAIT. Business students from the Wood Buffalo region can now stay at home to earn a NAIT bachelor of business administration degree at Keyano.

Or students coming out of NAIT's two-year diploma program can take work in the Fort McMurray area while completing their third and fourth year at Keyano, to get their degree.

Given Alberta's traditionally high rate of high-school dropouts and low rate of university-participation, flocking back to school is a welcome, unintended benefit of the economic slowdown, says Shawna Wasylysyn, who quit her job this year to go back to school full-time.

Ms. Wasylysyn had been a part-time student in Athabasca University's bachelor of business management program since 2011, while she worked full-time as a district sales manager for a national retail company. The economic downturn exacerbated an already challenging retail environment, adding more pressure on sales managers to make up the difference, she said.

"I just made the choice to step away from my career for a few years so I could hurry up and finish my degree in hopes of finding a different sales career," said the 33-year-old mother of four. Ms. Wasylysyn, who is also the president of AU's student council, notes that she is not alone.

"Anytime there's a downturn in the economy, the incentive exists for individuals to further themselves academically in an effort to gain more employment opportunities," she said.

"Now is the time to do it, when the economy isn't so hot." 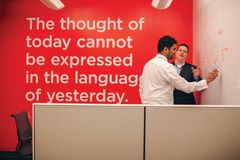 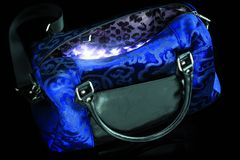 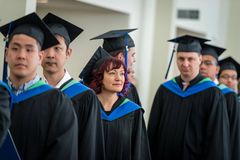 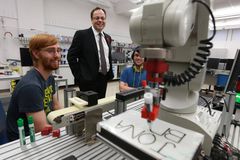 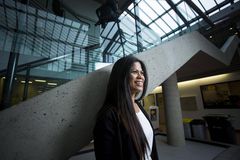