As a child, Adam Noble was so obsessed with nature he only wore green. He read flower guides beneath a dim lamp well past his bedtime. Once, he let the soccer ball roll past him at a little-league game because he was on his hands and knees inspecting an anthill.

On Monday, he will be one of a select group of student scientists attending ceremonies of the Nobel Prizes in Stockholm – but the 18-year-old has never been an academic superstar. When he finds something he is interested in, he focuses on it, sometimes to the detriment of the rest of his life. For Mr. Noble, anthills matter more than goals, and the world is full of anthills.

His most recent fixation, a misfit type of algae known as Euglena, has formed the basis of three high-school science projects. Euglena are microscopic outcasts of the plant kingdom with animal-like eccentricities, like tails. Long eschewed by research scientists, lab suppliers don't even sell them in large numbers.

If Mr. Noble had followed the advice of experts, and used a more typical and readily available organism like daphnia (a type of water flea) or ulva reticulata (another algae), his research wouldn't have won him international awards. Instead, his stubborn dedication to Euglena has won him the attention of Harvard recruiters, his own patent lawyer and million-dollar offers from venture capitalists. This week, his work with Euglena has taken him to Stockholm and the Nobel Prize ceremonies, where he is rubbing shoulders with Nobel laureates and dancing with Swedish royalty.

He was only working on a hunch.

"I Googled different kinds of algae," he said. "I thought Euglena looked kind of cool."

To conduct his experiments, Mr. Noble had to farm his own colonies of Euglena. He used plastic jugs that he stored in the cedar sauna in the basement of his parents' Lakefield, Ont., home.

To dote on the algae, he missed cross-country skiing practices and house parties. To keep them bubbling happily at a balmy 25 Celsius, he rigged special lighting and aerators. The Euglena thrived, and his parents' electricity bills went through the roof.

"They're a lot harder to take care of than a dog," he said. "And Euglenas don't have a lot of personality."

In 18 years of teaching, Mr. Noble's supervisor at Trent University, Neil Emery, has encountered two types of brilliance. The more common is the kind that soaks up information, understanding and retaining complex ideas almost instantly. The kind that can shape and manipulate that information is more rare.

If he's lucky, Prof. Emery says he might meet a university student with the second kind of brilliance ever year or two.

"They're really running with their own curiosity," Prof. Emery said. "Adam, he's like that."

Mr. Noble's experiments have sent ripples through the water-treatment industry. (During a recent conference at a major research institute in Nanjing, China, Prof. Emery watched scientists report findings that replicated the teen's work.) Mr. Noble set out initially to find a new way to test the water quality of the lake at the bottom of his parents' backyard. He started using Euglena to detect contaminants, and eventually discovered that his algae could retrieve tiny particles of silver, known as nanosilver, from wastewater. He has designed and patented a Euglena filter that can retrieve the particles, which are often used as antibacterial agents in sportswear and children's toys, from water-treatment plants. The results appeal to environmentalists and industrialists alike, as it keeps nanosilver – the effects of which are poorly understood – out of the natural environment, and creates a valuable, marketable by-product – silver.

"Some parents, I guess, know their kids are destined for big things from the beginning, but we just wanted him to find something that would make him happy," said Nora Fortune, the teen's mom.

Ms. Fortune had always watched the eldest of her two children a little bit more closely. Growing up, he'd been the kind of kid who makes a mother's heart ache: He was an occasional target for bullies because he was a little too earnest.

"Any kid that's a little different, they have issues," Ms. Fortune said.

Perhaps Mr. Noble inherited some of his fascination with nature from his parents, who are both veterinarians; and they were careful to nurture his interests despite their concerns.

His enthusiasm can be contagious. Sometimes, it worked in his favour. In Grade 3, he discovered a black-widow spider colony on his elementary school playground and then persuaded his classmates to start a campaign to spare the schoolyard colony of poisonous – and potentially deadly – arachnids from extermination.

Against all odds, he and his classmates won and the spiders were allowed to live out their natural lives in a tiny roped off corner of the schoolyard.

Despite the fact that his discoveries will likely make him a multimillionaire before the age of 20, he remains a member of teenage society, but with adult-like eccentricities.

Weekday mornings, Mr. Noble attends high-school classes – calculus and world issues – and in the afternoon, he conducts cancer research in a lab belonging to Prof. Emery, whom he met through the Canadian competitive science fair circuit. Unlike most researchers, Mr. Noble doesn't kill his embryos by snapping their necks or tossing them in the freezer. He takes them to his parents' veterinary clinic where they are euthanized by needle injection, just like a cat, dog or beloved pet.

The pale blue walls of his bedroom are decorated with sports trophies, an old windsurfer and a signed letter of congratulations from Stephen Harper.

That's the kind of mail Mr. Noble has gotten since his experiments began winning Canada international recognition. A prize he collected in May, at the Intel Science and Engineering Fair in Pittsburgh, won him the trip to the Nobels.

He will be sitting among the Nobel laureates Monday as the latest awards for science are handed out. The ceremony will cap a week in which he toured the Nobel museum, listened to the prize winners present their research, and presented his own scientific discoveries to the most elite group of scientists alive.

He'll be among the few commoners granted entry to rub shoulders with the award winners and royalty at Monday's Nobel Banquet.

Mr. Noble was surprised to learn that the world's most influential minds have some odd, teenager-like tendencies.

"I thought it was a typo on my invite, but the party goes until 5 a.m.," he said. "I didn't know award-winning scientists stayed up that late." 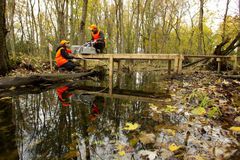