The University of Toronto has distanced itself from a controversial program dubbed "Courage" that is described as an anonymous support group to help young adults struggling to resist homosexual urges recently launched at the Catholic parish based on the school's main campus.

The Courage group – one of several such support gatherings that sprang up within the Catholic Church since the 1980s – started in October at the Newman Centre, an independent parish and meeting place that has integrated itself with U of T students, faculty and staff. The Newman group formed at the request of someone in the university community, a spokesman for the Archdiocese of Toronto said.

The Courage program is an official "pastoral partner" of Toronto's archdiocese, meaning it has the church's explicit support. But it has caused a rift at the Newman Centre, which at least a dozen parishioners have stopped attending because they oppose the program and its principles, while the U of T has urged the centre's leaders to discontinue it.

"The Newman Courage group is a spiritual support group for young adults who experience same-sex attractions and who desire to live chastely, in accordance with Catholic teaching," reads the centre's website. A pamphlet lists the five goals of Courage, including fostering a spirit of fellowship to help "ensure that no one will have to face problems of homosexuality alone."

"It's not a program that was started by the diocese, but it's a program that exists in other jurisdictions as well, and works with the church," Bill Steinburg, communications manager for the Archdiocese of Toronto, said in an interview. "My understanding of Courage is it's an opt-in program, an opt-in community, in which people are only involved if they really wish to be involved."

But one outraged Newman parishioner who has helped lead opposition to the program, and who requested anonymity over fears of discipline from his employer, decried "the harm and the damage it does, primarily to vulnerable younger people who are struggling with their sexual identity."

Newman Centres are established around the world, usually near non-Catholic universities, including McGill and Queen's in Canada. Toronto's centre operates as a parish and offers programs and events to students and the local community. It openly targets university students – the centre's vision is, "To be the spiritual home for Catholic students on the University of Toronto's downtown campus" – but is not under the university's control, and is funded by the local Catholic diocese.

Despite its arm's-length status, four parishioners launched a formal complaint with the U of T – one of several the school received and solicited in recent months, a spokesman said. The university said in a statement that its vice-president of human resources and equity, Angela Hildyard, labelled the Courage program "inconsistent with the university's values" and has urged the Newman Centre to cease offering or promoting it, and to make clear in all its publications that U of T does not endorse it.

The Newman Centre's website now states, "This program is not offered by or connected to the University of Toronto."

Several Newman parishioners agreed that homosexuality "was never an issue" at the centre until last fall, and said some people who have since left were gay. But Father Cauchi, 31, who took over as pastor and chaplain last summer and approved Courage's launch in the fall, has stayed a strong proponent of the program. 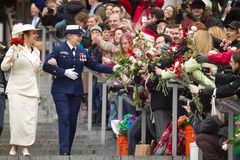