Research shows overweight children get lower grades than their healthier peers. As the rates of childhood obesity rise and physical activity rates fall, schools face new challenges in educating students. Should they intervene – increase gym time and legislate what can be sold in school cafeterias – or does this infringe on the responsibilities of parents?

In 1981, a typical 12-year-old boy had a body mass index of 18.1, and a girl 18.4. Fast forward a generation, the same boy and girl are heavier with a BMI of 19.2 and 19.5 respectively. It's not just their BMI that is increasing. According to Statistic Canada studies, a typical 12-year-old teen is likely to have poorer grip strength and less flexibility. Canada's childhood obesity crisis appears to be deepening.

Most Canadian teens are not meeting the recommended physical activity guidelines. At the same time, this generation of children is also less active. The Canadian Physical Activity Guidelines suggest youth aged 12 to 17 years should do at least 60 minutes daily of moderate to vigorous physical activity. The reality, however, is that less than half of all children met those requirements three days a week, and fewer still – only 6.7 – met it six days a week. 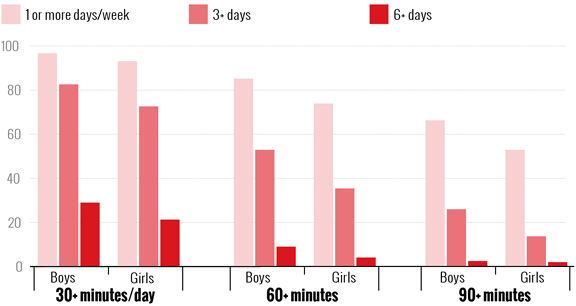 Why should schools care?

There's evidence that overweight children get lower grades than their healthier peers, and that student populations with healthier body- mass indexes perform better academically. In a Canadian test study, three different Grade 9 classes of at-risk students at City Park Collegiate Institute in Saskatoon were tested at the start and end of the school year. Those who were in the physical education program for one or two years, and worked out for 20 minutes, three times a week, consistently out-performed students who did not do any physical activity. Should schools intervene if increased gym time can help students? Or is the diet and health of children solely the domain of parents? 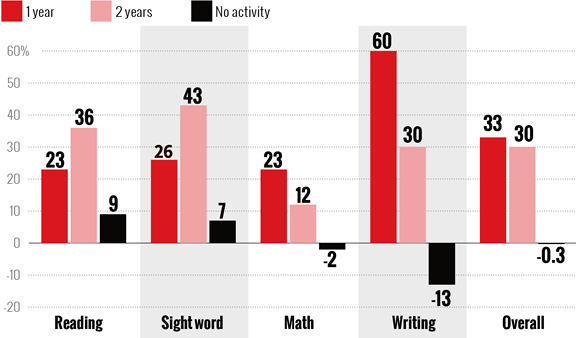 How do the provinces and territories stack up?

Are children being physically active during their physical education classes? No nationally representative data exist to answer this question. Some provinces have daily physical activity requirements while others just slot PE time into the timetable. Most physical education experts say the mandated daily physical activity is not enough. Others would argue that schools should simply focus on the business of educating young minds. 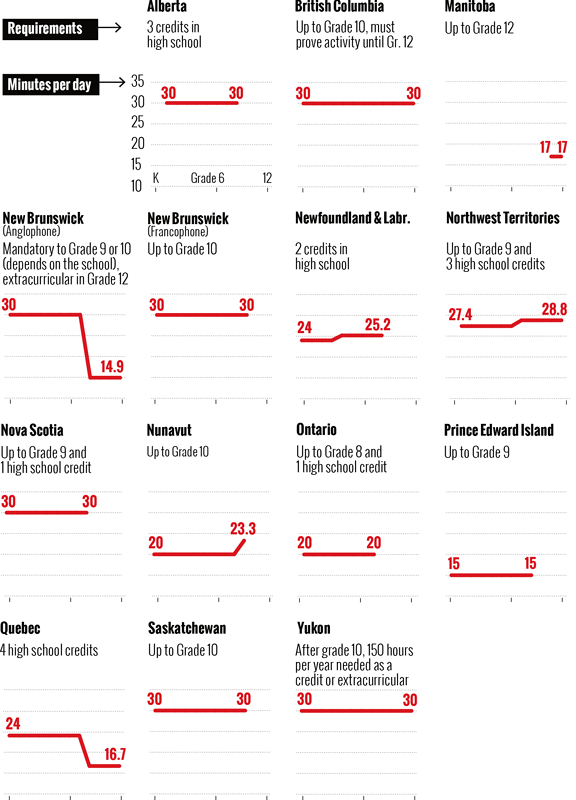 How do you get your students moving when most of them get bussed in to school and the gym isn't big enough to accommodate all of them?

Camilla Road Senior Public School is nestled amongst high rise apartment buildings, in a suburb off a major Toronto highway. The gym is often packed, though most students don't even have a PE class every day. A group of highly motivated teachers, backed by the school administration, launched the Academic Commitment to Excellence program two years ago that got students out every morning before buckling down for their classes. The results are dramatic, says principal Karen Lane.

Profile of the program

Students in the ACE program spend first period working out. As a result, teachers have to quicken the pace at which they teach the curriculum, but they say they spend less time getting the class to focus.

Students less likely to get sent to the office

Students in the ACE program are less likely to get into trouble, performing better in class and are physically fitter. While the program is still in its early stages of tracking data, it's clear that students who used to be sent to the school office for acting out are less likely to do it once they were in ACE. 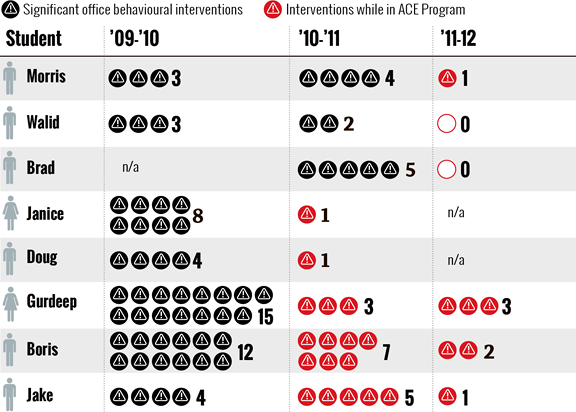 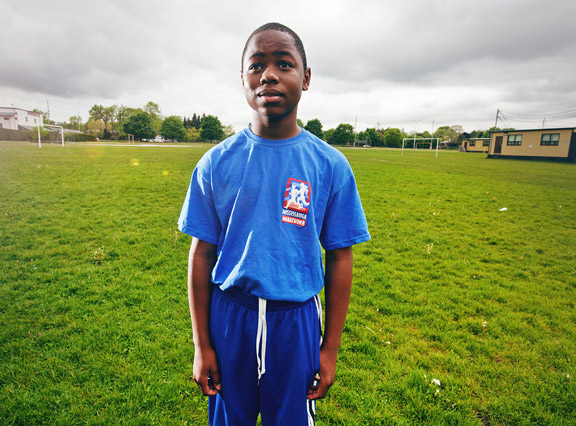 Has lost 8 pounds and can now do 70 pushups compared to 30 at the beginning of the school year.

Used to be sent to principal's office often but rarely gets into trouble anymore. Now he has now pulled up his math grade in the 70s to become an A-student.

"Before I came to ACE, I used to cause trouble in class and I wouldn't hand in my homework. I would be loud and obnoxious or just daydream in math class. I didn't see the point of school and wouldn't show up on time. But now I'm doing better. I'll even come in to school early to help my homeroom teacher setup in the morning. I feel like school is important and I'm eating healthier and I don't want to mess up my grades because I care about my future."

"My mother died all of sudden during March break. She had cancer. And everyone was saying I should take a couple of days off. But I felt like I could cope more if I actually went to ACE and talked to my friends. I still have those moments when it still shocks me, but I try and look out for my little sister and always try to hand in my homework on time. I feel like ACE has given me more leadership qualities and makes me listen better."

To get his students to stay in school one Vancouver teacher has them running marathons. Teacher Trevor Stokes has coached close to 100 students across the finish line at marathon and half-marathon events. He ensures that nearly half of every school day at the Streetfront Alternative Program is devoted to rigorous physical exercise, and believes the physical exertion seems to help his students concentrate in class. The kids in the program are sent there because they've skipped class or threatened to quit school, so getting them to tough it out over 42 kms is no small feat.

"Eventually they learn it's worth it," said Mr. Stokes. "We're turning them into kids who want to come to school."

Profile of the program

Half of the at-risk youth at Streetfront recently ran a marathon or half-marathon. Staff are seeing huge benefits for this group of students, and nearly all of them graduate from high school. 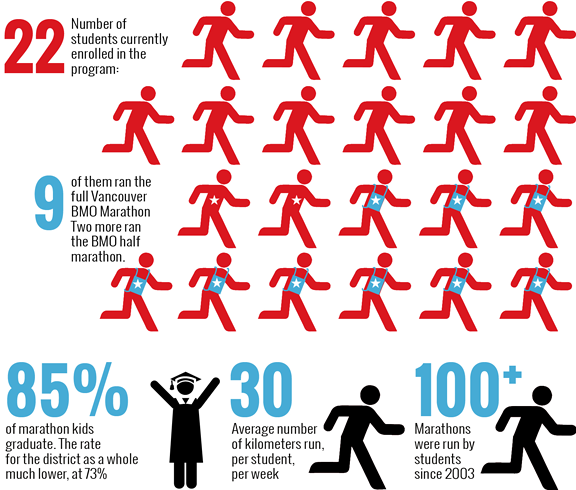 Profile: Student who has benefitted 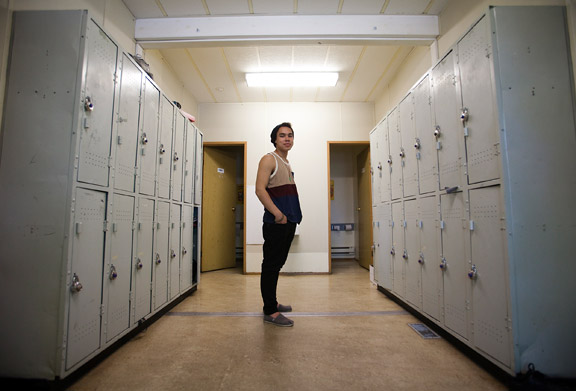 Will graduate high school this year and has won a full scholarship to college.

Before Streetfront "I skipped [class] a lot and hung out a lot with bad influences... It was the best thing that could ever happen because I couldn't see anything happening in my life without coming here."

"It makes me a better person because a really good run cleans out your lungs, but it also cleans out your mind. When you run for four hours straight you have time to think about all the things you have to get done.

Children's physical activity levels are an undeniable concern in this country: Are our kids moving enough? And are children who don't get enough daily exercise at a disadvantage in the classroom?

We're looking for your success stories: Do you know a child who was once idle and is now physically active? What kind of change have you seen in them - on the playground, in school or at home?

Share your success story below or send us an email. 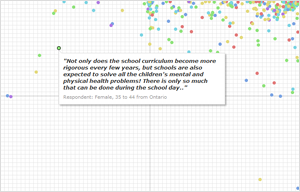 What role should schools play in students' health? This generation of children has a lower life expectancy than previous ones because of inactivity and poor diet, and studies show that can have a negative impact on learning. So should schools intervene?

If you're unhealthy, you're not in the right mindset to learn. Teachers spend whole days with kids, they're a great resource for teaching young kids how to live a healthy lifestyle.