It's the last week of Grade 8 and naturally, Jackie Peng is looking forward to summer break, now that her math and science exams are out of the way.

She's lined up a job interview at a Toronto seniors' hospital, where she hopes to work as a volunteer in July. And then in August, just before she has to buckle down and face the even greater pressures of Grade 9, she's representing Canada as second board on the women's team at the 2012 World Chess Olympiad, which opens in Istanbul on Aug. 27.

Jackie just turned 14, which makes her the second youngest person ever to play on the Canadian Olympiad team. Already some experts are predicting she could be Canada's first female grandmaster. But if she's feeling any anxiety about lining up against high-level competitors much older than herself – people who push pawns for a living and don't have to fret about catching up on missed schoolwork after the two-week tourney – this calm, quiet child of Chinese immigrant refuses to show it.

"Playing at tournaments is the fun part," she says, sitting across a desk at the highly competitive University of Toronto Schools (UTS), where she plays flute and volleyball, does some shot-putting and swimming, and holds her own as the voice of reason in a noisy male-dominated chess club. "Studying chess is the hard part. This is my first tournament playing not just for myself but for Canada, so I've got to put in a lot of work before it starts."

She has an almost reluctant conversational manner – she loathes the idea of coming across as a show-off. But put her near a chess board, let her channel all that work into play, and something changes.

"I think my sense of intuition is really good," Jackie says. "I just see the move. I often overestimate my position, but I don't ever underestimate it. And when I do overestimate, it goes okay because I seem to do things that I didn't know I could do, I tap into something I didn't know I had."

Veteran players describe this as her killer instinct. She calls it her chess mood, and makes it sound like a very pleasant altered state – a high-pressure world turned into pure fun.

Work is something she understands well, even if her career makes her sound more like the stereotypical chess prodigy. She's been playing competitive chess for only four years, joining a school chess club and then winning the Ontario Girls Under-10 championship in 2008. Her scientist parents, neither of whom played the game, needed to be prodded by other parents to enter her in the Canadian championships, which she also won.

"That was pretty cool," she admits. "My parents thought I was a genius and got me a teacher. But I'm not a genius. Maybe I have more talent, but I have to work hard like everyone else."

Now, she has two personal teachers, practices technique in online matches where she goes by the nonsense name of Loafy, analyzes her past games with computer-chess software, monitors the games of international masters while they're in progress, memorizes classic openings, plots her midgame and endgame strategies and, recently, beat all 21 opponents she faced in a simultaneous exhibition match.

"She could be Canada's first female grandmaster, no problem," says Jura Ochkoos, one of her teachers. "She's hard-working, has a good memory and a determination to win. In chess, you need to have a killer instinct, and she has it. But I would like her to work more."

There don't seem to be enough hours in her day, given that she's on a personal track to become a doctor with marks in the 90s, pushes parental limits on her number of extracurricular activities, and likes to hang out with friends at Toronto's Yorkdale mall.

Her parents' solution to this self-imposed time crunch was to buy a small condo within a quick subway ride of UTS, cutting two hours off the rush-hour commutes to and from the family home in Richmond Hill, Ont. Those precious hours gained, says her mother Xuekun Xing, a researcher who monitors drug trials, "equal her daily chess practise practice time."

Jackie and her father, Henry Peng, a senior scientist with the Deptartment of National Defence, spend the week at the sparely furnished apartment and return home on weekends. Counting the thousands of dollars spent on international competitions – Jackie has played in Brazil, Colombia, Greece and Vietnam, often with her parents and younger sister in attendance – chess expenses have consumed a large part of the family's disposable income.

"We could pay off the mortgage or put money into an RRSP," says her mother, who trained as a cardiologist in China and met her husband while doing research at the University of Toronto. "But Chinese people are more willing to invest in their kids' education."

The calculations aren't quite that easy when it comes to Jackie's future in chess, however. "From a parent's point of view," says Ms. Xing, "chess in Canada is not a professional job, you can't survive. It's sad with all the talented players we have, but this is a hockey country, not a chess country. We fully support her in her goal to be the first Canadian woman grandmaster, but maybe she can work on it after she graduates from university and starts a family."

It's a common theme in Canadian chess, and one that accounts for the country's middling performance in international competitions like the Olympiad. "Chess isn't really prestigious in Canada," says 39-year-old Natalia Khoudgarian, a chess teacher who will play first board for the women's team ahead of Jackie. "A lot of bright players will usually quit once they go to university. Most of the teams we'll be playing represent countries where the game is taken seriously: They're professionals who live through chess, who have tremendous support. It can be very intimidating."

But when you're 14 and on the rise, free of final exams and looking forward to some down time at the mall, maybe the picture looks different. 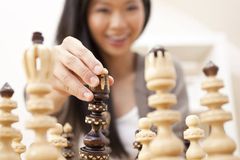 Despite overprogramming, kids today have bigger imaginations than previous generations: study
May 31, 2012