Once an outlandish frill for the ultrarich, home elevators are being remade and rebranded for the well-off, and are inching toward the ranks of once-rare residential features – such as swimming pools or granite counter tops – that have become more commonplace.

Whether it's baby boomers looking for a home they'll never have to leave, or families who want a three- or four-storey house on a tight inner-city lot, it seems another $20,000-$30,000 for an elevator isn't going to break the bank for Canadians who can afford to pay $1-million or more for a new home.

"I had never really considered an elevator," said Calgarian Domenico Daprocida, 41. "But it wasn't as unaffordable as I initially thought."

After city officials told him the attached garage of his new 4,400 square-foot house had to be underground, not on the main level, to reduce its visual impact, he knew he had to change the design.

Hauling groceries up a flight of stairs with two young sons in tow wasn't going to work.

"If you've got a bunch of flights of stairs to get up, it's a little tough," said Mr. Daprocida, a restaurateur and home builder who has moved back to Calgary after a decade of constructing houses (none with elevators) for oil-sands workers in Fort McMurray.

He ended up with a three-stop, hydraulic elevator – with a stainless steel sliding door and custom window – at a final cost of about $29,000. Construction on the house, which overlooks a golf course, is nearing completion, and Mr. Daprocida and his wife, Maria, are looking forward to the evenings when they can carry their five-year-old son from the car to the elevator, and then straight to bed on the second floor without breaking a sweat.

Hard numbers in Canada are hard to come by because no central body keeps track of home elevators, and no licence is required, as there is for commercial systems. But manufacturers say Toronto, Vancouver and Calgary lead the market. In Calgary, the two biggest home elevator companies report together they installed at least 80 home elevators in 2012, up even from the building boom years of 2007 and early 2008.

Canadians, it seems, are at least as keen on home elevators as Americans. For instance, the hilly city of Los Angeles – with a population more than three times that of Calgary's – issued permits for 529 home elevators in the past five years.

Rudimentary lifts have long been installed in homes for people who have trouble with stairs, and today's demand is partly driven by baby boomers who want to "age in place." Since it's more costly to retrofit houses with elevators than to put them in new ones, lifts could become a selling point. Mr. Daprocida is counting on his home's elevator to broaden the potential pool of buyers when he eventually decides to sell. "Senior citizens would love a house like this," he said.

Kathy Yuen, president of Phase One Design – a Calgary home building firm that specializes in luxury and inner-city homes – said discretionary elevators were rare just a few years ago. Now, she said, almost one in five of her company's projects have an elevator.

"It's becoming more commonplace, almost to a point where that is always a discussion that we have with our clients in the initial design meetings," Ms. Yuen said. "Seven years ago, that would not have been the case."

Home elevator manufacturers offer interior finishes such as maple, red oak and cherry wood, or even a full glass enclosure – with either an accordion gate or a sliding door. And the elevators are getting more posh. Simon Snaith, dealer sales manager at Cambridge Elevating in Cambridge, Ont., said some new systems are "decked out" with special lights, mirrors, audio systems and iPads for the car's operating panel.

"A lot of the disposable income is with retirees, and they're buying a lot of upper-scale homes," Mr. Snaith said. "It becomes just another amenity, another option."

The changing way Canadian houses are built might also fuel demand for home elevators. Even in Calgary, where the suburbs spread across the Prairie and along the foothills, people with money are increasingly looking for a prime lot close to work downtown. The demand for more indoor living space means tearing down old houses and building up instead of out.

"We're doing a lot of four-stop elevators where we start in the garage and basically go right up through the middle of the house to a lofted bedroom space in the top. We're doing some that are 40 feet tall."

Canwest originally focused on medically necessary lifts. But Mr. Poffenroth said 70 per cent of the company's home elevator sales now are "for people that don't rely on the elevator, per se."

"We have a lot of clients that take the approach, 'Look, we're building a whatever-million-dollar house. We might as well put it in, even if we don't have the need for it, up front.'" 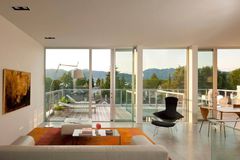 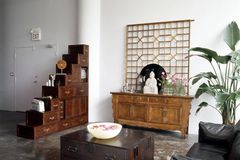