Two engineers who this year signed a letter declaring the Elliot Lake Algo Centre Mall structurally sound were found guilty of professional misconduct for work on an unrelated project by a provincial regulatory body in 2010.

The Ontario Provincial Police are conducting a criminal investigation into the Algo Centre's collapse on June 23, which killed two people and injured several more. A judge was recently appointed to head a public inquiry.

Although city officials have remained tight-lipped about past inspections on the mall, documents released this week reveal that the engineers, Gregory Saunders and Robert Wood of M.R. Wright & Associates, inspected the building as recently as April, 2012.

Details of inspections on the Algo Centre performed by M.R. Wright are sparse, and there is no indication of any irregularities in the firm's work there.

A May, 2012, letter to the mall's manager, Rhonda Bear, signed by Mr. Wood and Mr. Saunders, noted rust on beams in the mall, but declared the building structurally sound.

Three years earlier, M.R. Wright conducted an inspection and in a letter to Henri McCleery, the manager at the time, Mr. Wood warned that leaks had damaged the building's fire proofing.

In November, 2010, the discipline committee for Professional Engineers Ontario (PEO) signed a decision finding the two men and their firm, M.R. Wright & Associates, guilty of professional misconduct for their work on the rehabilitation of a private logging bridge in Northern Ontario.

Bridge owner Wagner Forest Management Ltd. retained M.R. Wright in 2004 to provide on-site inspections and designs for the repairs, according to statements of allegations provided by PEO. Because the bridge was on Crown land, the Ministry of Natural Resources maintained authority over the project.

The documents say that, between 2004 and 2007, MNR engineers and a third-party consultant hired by PEO raised several concerns, including work done without a proper permit and incorrect information on the bridge's capacity in designs for the project.

The allegations against the men and their firm were compiled into a single proceeding before the discipline board.

Although they initially denied the allegations, the men later agreed to a plea deal. The association did not pursue allegations of incompetence against both men.

The discipline committee ordered Mr. Saunders to take a test to maintain his licence, which he passed. It ordered Mr. Wood to take tests and his licence remains under suspension.

Neither Mr. Wood nor Mr. Saunders responded to requests for comment made to their Sault Ste. Marie office.

M.R. Wright was formed in 1991. Former company owner Meredith Rhodes Wright sold the company long before either the bridge project or the Elliot Lake inspections.

Mr. Wright said he never had concerns about the work done by Mr. Wood or Mr. Saunders, and that the company's record during his tenure was clean.

"There wasn't ever any problems. We got an order to do a job, we did the job, we got paid. There was never any flack left after," Mr. Wright said.

PEO is currently investigating the 2012 letter, particularly the absence of an engineer's seal of approval on it.

Because of Mr. Wood's suspension, he could not seal the May, 2012, letter, Mr. Allen said. No other engineer's seal is attached.

Mr. Allen explained that the president of a firm, such as Mr. Wood, does not need to be a certified engineer, but non-engineers or those under suspension cannot offer technical recommendations on specific structures.

Douglas Elliott, the lawyer behind a proposed class-action lawsuit for collapse victims, said Thursday that he would add the engineering firm to the suit's list of defendants.

The Ministry of Labour is conducting an investigation into the collapse, but would not comment on specific details on Friday.

Elliot Lake inquiry may be complicated by criminal probe
April 30, 2018 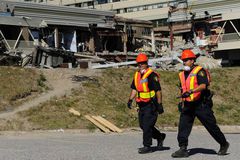 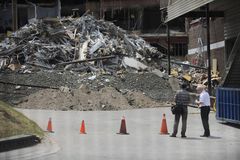 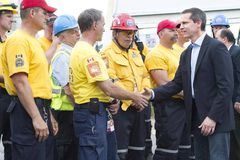