Disgraced former broadcaster Jian Ghomeshi pleaded not guilty Thursday to five charges, including four counts of sexual assault and one count of overcoming resistance by choking.

The former host of CBC Radio's cultural affairs show "Q" did not speak with reporters as he walked into the courthouse in downtown Toronto where he was arraigned during a court appearance.

Ghomeshi, wearing a dark suit and tie, spoke only two words in court, "not guilty," when asked how he pleaded. He had to repeat that because he wasn't speaking into a microphone.

Judge William Horkins then cleared the public and media from the courtroom to deal with a motion.

The 48-year-old was originally charged with seven counts of sexual assault and one count of overcoming resistance by choking, but the Crown withdrew two sexual assault charges in May because they said there was no reasonable prospect of conviction.

A lawyer for "Trailer Park Boys" actress Lucy Decoutere, one of the women involved in the case currently before the courts, said the allegations against Ghomeshi have triggered an important national conversation about intimate violence.

"While this case works its way through the justice system, countless assault survivors are privately reclaiming agency over their lives, telling their stories, and finally beginning to trust that people will believe them," said Gillian Hnatiw.

Decoutere, who waived her right to a publication ban, publicly accused Ghomeshi of choking her "to the point she could not breathe." She also said he slapped her three times "hard" on the side of her head" in 2003.

Ghomeshi is also facing one charge of sexual assault that is being tried separately. That trial is scheduled to begin next June.

The CBC fired Ghomeshi last October after executives saw what they described as graphic evidence that he had physically injured a woman.

The one-time radio star has admitted to engaging in rough sex, but said it was consensual.

The alleged assaults for which he was originally charged occurred between 2002 and 2008.

Ghomeshi's $100,000 bail conditions require him to remain in Ontario and live with his mother.

If convicted, Ghomeshi faces a maximum sentence of life in prison. 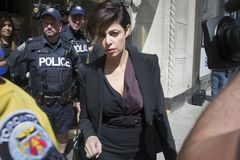 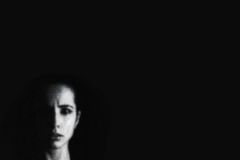 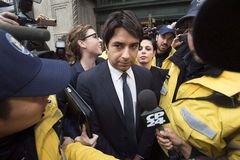