Two of the biggest stars of the Canadian entertainment industry have resigned from running their empires amid accusations they sexually harassed or assaulted people under their professional sway.

Gilbert Rozon, who is known in North America as the founder and president of the Just For Laughs comedy festival, resigned from the post, along with his job running Montreal's 375th anniversary celebrations after nine women publicly accused him of misconduct ranging from harassment to rape.

He was also the star judge on France's version of the America's Got Talent franchise. A French broadcaster announced it was pulling the show.

Éric Salvail, a television and radio star and producer who is even more prominent in Quebec but less known outside the province, apologized Thursday and admitted he has long committed sexual misconduct involving employees at his production company and others in his orbit.

Neither of the men is charged criminally in the emerging scandal. (In 1998, Mr. Rozon was convicted of sexually assaulting a 19-year-old casino worker.) At least three of Mr. Rozon's new accusers said they have complained to police, which the police would not confirm Thursday.

Several of the accusers said they came forward because of the #MeToo movement on social media in which people described experiences of abuse following the sexual-abuse accusations made against Hollywood mogul Harvey Weinstein.

Eleven men and women accused Mr. Salvail of workplace harassment, including making persistent sexual propositions, touching them and exposing his penis during work time. Their allegations were detailed in a report published this week in La Presse. Mr. Salvail made a lengthy apology Thursday and admitted many more people than the original 11 were hurt by his misconduct.

The first of the recent accusers to make his name public said he expects more allegations against major entertainment players in Canada.

"This is not over yet, there will be more names coming. A lot of victims across Canada have been getting in touch with me," said Marco Berardini, a hairdresser and makeup artist who said he was harassed by Mr. Salvail about 15 years ago.

"The Me Too movement showed us how many people have been sexually assaulted, sexually abused, sexually harassed, and it angered everybody while also making people feel supported and making them understand they're not alone."

Both entertainment bosses were part of the business establishment in Quebec. Mr. Rozon was a personal friend of Montreal Mayor Denis Coderre and resigned from his position as vice-president of the city's Chamber of Commerce.

"I did not expect this," Mr. Coderre told reporters. "What's important going forward is to establish there is zero tolerance for this. It's shocking and now we must let justice run its course."

The new accusations against Mr. Rozon first emerged on one of his accusers' Facebook page and were detailed in investigations published Thursday by Le Devoir and Montreal radio station 98.5. The alleged incidents took place between 1982 and 2016 and involved seven women and two girls aged 14 and 15. They included actors; behind-the-scenes personnel; a summer student employee of the festival; the daughter of a comedian who was also a friend of Mr. Rozon; and prominent television host Pénélope McQuade.

The alleged incident was one year before Mr. Rozon was convicted of sexually assaulting a 19-year-old casino worker at Manoir Rouville-Campbell by touching her breasts. He was given an absolute discharge and quickly rose back into powerful positions in business and entertainment.

Mr. Coderre said he knew of the conviction but not of rumours swirling around Mr. Rozon's conduct.

"The judgment in 1998 said there was little chance of recidivism and we left it at that," Mr. Coderre said. "I'm shocked."

Actor Salomé Corbo says she was 14 and working at Just For Laughs in 1990 when she attended an end-of-festival party where Mr. Rozon appeared intoxicated. "He jumped on me, grabbed me and started putting his hand up my dress," she said. "I said 'Come on Gilbert, I'm 14.'" Ms. Corbo said Mr. Rozon penetrated her with his finger before she pushed him off and "he disappeared."

Lyne Charlebois, a photographer, said Mr. Rozon invited her to show him her portfolio in 1982, at his office, over dinner with her boyfriend later that day and finally at his home where he attacked her. "He jumped on me and pulled down my pants and I thought 'Who is this guy? He just met my boyfriend,'" Ms. Charlebois recalled. "I was afraid I was going to die. I let him do his thing, waited until he finished, and left.

"I considered myself a strong woman and this did tremendous damage to me."

Mr. Rozon issued a statement late Wednesday saying he was withdrawing from his roles "to take stock" and out of respect for the workers in his enterprises and their families. "To all those I may have offended in the course of my life, I'm sincerely sorry," he said.

The allegations against Mr. Salvail are centred on engaging in lewd conduct with female and male employees and associates, and hounding them for sex. Mr. Berardini met Mr. Salvail around 2003 and described how the producer picked him up in his car to discuss employment potential. Within minutes Mr. Salvail propositioned him, he said.

"After the third time, I basically decided I would never see him again," Mr. Berardini said.

Mr. Salvail issued an apology Thursday. "It's a brutal realization. For many years and in many situations and with many people – many more than those made public – my behaviour caused harm," he wrote.

"I offended you, I disturbed you, I hurt you, and I recognize it. I'm sorry. Sincerely."

Mr. Berardini said he needs time to absorb the apology.

He moved to Los Angeles 11 years ago and became a hair and makeup artist to stars such as Norah Jones, Jennifer Lopez and Céline Dion. He says he hasn't faced or seen abuse since. "I'm kind of lucky. I work with a lot of female pop stars and actresses, and at this stage of their lives, they're the boss. I love it." 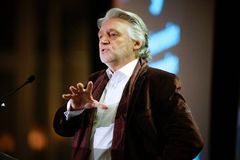