A former Nova Scotia politician was sentenced Thursday to nine months in jail for defrauding the public of nearly $61,000 in the province's legislative spending scandal.

"I acknowledge the harm I have caused others."

The Crown told the court that Mr. Wilson defrauded the Nova Scotia government of $60,995 from January 2006 to December 2009 by falsely claiming he paid five people for constituency work when he actually deposited the money in his own account.

"People who make the law must uphold it as well."

Mr. Wilson's son testified earlier in the day, saying his father's addiction to gambling drove him to commit his crimes.

"He told me, 'I have a gambling addiction that caught up with me and that's consumed me,"' Jonathan Wilson said.

"I've never heard my father speak with such emotion. ... I'd never heard him speak like that."

Judge Ross said while he believes Mr. Wilson is genuinely remorseful for his actions, there must be consequences for what he did.

"To what extent does gambling addiction mitigate stealing from the public?" Judge Ross said.

"Mr. Wilson is not devoid of moral responsibility for his behaviour."

The judge also sentenced Mr. Wilson to 18 months of probation following his jail term, during which he cannot consume alcohol nor go to any gaming establishment.

Mr. Wilson, who once served as the chairman of the Liberal caucus, was first elected to represent the Cape Breton riding of Glace Bay in 1999, but he abruptly quit politics in 2010.

The 56-year-old former broadcaster, who was one of four politicians charged last year after a police investigation into constituency allowance spending, was also ordered to repay the public purse.

The RCMP probe began after provincial auditor general Jacques Lapointe uncovered several cases of what he described as excessive and inappropriate spending of the allowances.

Mr. Lapointe's February 2010 report ignited public outrage, revealing that thousands of dollars in public money had been spent on a range of items including power generators, TVs, custom-made furniture, laptops and cameras.

A month later, Mr. Wilson resigned his seat without explanation, saying only he could no longer fulfil his duties.

His sentencing comes one week after Richard Hurlburt, a former Tory cabinet minister, pleaded guilty to fraud and breach of trust. He will return to the Nova Scotia Supreme Court in Yarmouth for a sentencing hearing on July 5.

Russell MacKinnon, a former Liberal cabinet minister charged with fraud, breach of trust and uttering forged documents, is to return to court next week for a pre-trial conference and a date for his judge-only trial will be set on May 3.

A preliminary hearing is set to begin June 11 for Trevor Zinck, a former NDP member who now sits as an Independent. He faces charges of fraud over $5,000, breach of trust and two counts of theft over $5,000.

The constituency expense scandal in Nova Scotia came about five years after one that erupted in Newfoundland and Labrador five years earlier. In that province, four politicians, a senior civil servant and a businessman were jailed.

Nova Scotia's NDP government has implemented changes to the constituency allowance system, such as publicly posting politicians' expenses, in a bit to improve transparency. 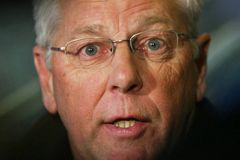 Former N.S. Liberal to plead guilty in spending scandal: Crown
September 2, 2011
new
Former Nova Scotia Liberal pleads guilty to fraud in spending scandal
September 13, 2011
Former N.S. politician headed to court on spending scandal charges
August 31, 2011
Follow us on Twitter @globeandmail Opens in a new window
Report an error
Due to technical reasons, we have temporarily removed commenting from our articles. We hope to have this fixed soon. Thank you for your patience. If you are looking to give feedback on our new site, please send it along to feedback@globeandmail.com. If you want to write a letter to the editor, please forward to letters@globeandmail.com.
Comments are closed