A former Ottawa high-tech executive has been found guilty of conspiring to bribe several government officials in India, including a former aviation minister, in a foreign bribery case that is the first of its kind to be tried in Canada.

Nazir Karigar, an Indian-Canadian businessman, plotted to distribute at least $450,000 in bribes to decision makers at state-owned Air India as well as Praful Patel, an Indian cabinet minister who oversaw the airline at the time, in return for a contract to provide the airline with security technology, Justice Charles Hackland of the Ontario Superior Court of Justice ruled Thursday.

Judge Hackland's decision, which makes it clear that there is no evidence that officials in India accepted any money, is the first time a Canadian judge has assessed evidence in a trial and ruled on the bribery law, known as the Corruption of Foreign Public Officials Act. Three companies have been convicted under the act, which came into force more than a decade ago, but they all pleaded guilty.

The case dates back to 2005, when Mr. Karigar contacted CryptoMetrics, an upstart U.S. high-tech security company with an office in Ottawa, and said he could help the firm secure a contract to supply Air India with a facial-recognition security system. Mr. Karigar went on to become the executive director of the company's Indian subsidiary, and introduced the firm to several high-ranking Air India officials, one of whom was a childhood friend.

Judge Hackland ruled that, despite the fact that prosecutors were unable to prove that money had been funnelled to any of the Indian officials, there was a sufficient paper trail, including e-mails and a spreadsheet that was created to break down how bribe payments would be dispersed, to show that Mr. Karigar and other CryptoMetrics executives intended to make illicit payments. The law merely requires the Crown to prove that there was a conspiracy, Judge Hackland ruled, explaining that if police in Canada were required to obtain proof of someone receiving a bribe in a foreign country it could possibly put "foreign nationals at risk and would make the legislation difficult if not impossible to enforce and possibly offend international comity."

When details of the allegations against Mr. Karigar emerged after his 2010 arrest in Ottawa, several of the Indian officials who were alleged to have received bribes vehemently denied having accepted a bribe. Mr. Patel, who is now India's Minister of Heavy Industries, said that he never accepted any money in relation to the deal. He also pointed out repeatedly that CryptoMetrics never received a contract from Air India.

In an interview at his New Delhi office in 2012, he said he was shocked that he was hearing about the allegation through a Canadian reporter. "How can my name be drawn into something that is absolutely false?" he said. He also said he believed that Mr. Karigar had invoked his name to persuade his superiors to send money for a bribe that he kept for himself.

A sentencing date has not yet been set. The maximum sentence is five years in prison.

A farewell to India: false miracles and true inspiration
August 10, 2013 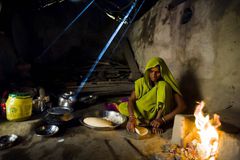 Opinion
The sweaty truth about air conditioning: It isn’t so cool
July 26, 2013