To most Canadians, a friendly neighbour with a backyard pool is a rare treasure, someone to be schmoozed in hope of a precious invite for a dip on a hot summer's day.

In many Quebec neighbourhoods, people need only look across the fence for a likely candidate: A nearby backyard pool is usually the rule.

No other province comes close to Quebec for the ubiquity of the backyard pool. The hottest areas of the southern United States offer the closest points of comparison, but even California doesn't match the province for pool penetration.

Finding evidence of the Quebecker's love of the backyard plunge is as obvious as glancing at a satellite photo, crunching some numbers or looking out the window as your flight lands in any city in the province. Uncovering why the attraction is so strong is an entirely different matter.

Speak to pool owners, installers, safety advocates and the rare, sweltering, pool-deprived man on the street, and theories with a wide range of plausibility abound. Until some sweaty academic dives in with an exhaustive study, they'll have to do.

"It's a glorious asset," said Laura Bergeron, a mother of two children who has a pool in the Montreal bedroom community of Hudson. "I'm not sure why we have so many of them. We love being outside. We're a homebody kind of family, but we love that our pool is a social magnet. I think Quebeckers tend to be a little more social, and love to entertain. We're also trying to maximize our summer."

Quebeckers have long tended to stay home more than most during their short, hot and muggy summers. What became a trend called the "staycation" during tough times in much of North America has been known for decades as "Balconville" in working-class areas where Montrealers would suffer the heat sipping a beer on the front stoop or balcony. As these Quebeckers fled to the suburbs, the home hangout became the patio.

About the same time suburban development exploded, cheap above-ground pools started to hit the North American mass market, to rather modest success in most places. But in the 1990s, savvy salesmen in what became a fiercely competitive Quebec pool industry found a market ready for a cool pool, at a price of no more than a few thousand dollars.

"A [now-defunct] company named Citadel started advertising on a grand scale in the 1990s, on television, radio and newspapers, in a way you just don't see in Ontario," said Yvon Lemire, the owner of the West Island outlet of Club Piscine, one of a handful of companies that have continued the marketing blitz for some 20 years now.

"We're everywhere, and it's constant. The advertising we do makes most businessmen scratch their heads in wonder. "The advertising put the dream in people's heads. They found out they could skip one holiday and have a pool for 20 years." We built a market that wasn't there."

The marketing and pricing campaign has been so successful, the above-ground pool has become a sort of impulse buy for many Quebeckers, according to Raynald Hawkins of the Quebec chapter of the Lifesaving Society, a water safety advocacy group.

A spate of seven toddler drownings in the past month has shown that the consequences for child safety, and the installation of fences and gates, are not always as clearly thought out as they should be, he said.

"Quebeckers will buy a pool like we'll buy a fan or air conditioner," Mr. Hawkins said. "The price is cheap, they're easily constructed, you buy it and you're swimming days later." There's an instantaneity that appeals to the Quebeckers' impulsive side."

Take to the air around Quebec City or Montreal, and you will see blue dots peppering the landscape with startling frequency. In Montreal's far east end lies a street where nine backyards in a row – and 14 of 15 – have pools. In Laval, just to the north, a series of homes along one block of Rue Pasteur have no fewer than 25 backyard pools. Sit on the balcony of an apartment building in Vaudreuil-Dorion, off the western tip of Montreal Island, and it seems you could skip a stone for a mile, hitting one pool after the other.

Statistics support what the eye reveals. Quebec has well over 300,000 backyard pools, more than Ontario (which has five million more people), and more than almost anywhere else in North America on a per-capita basis.

Quebec pools are not part of palatial estates with carefully landscaped blue kidneys carved into vast grounds. Two-thirds of them are above-ground pools, many plunked in the centre of your average working-class suburban yard. (In most areas of North America, the statistics are reversed in favour of in-ground pools.)

For the past 10 years, Montreal and its suburbs have added an average of 3,500 backyard pools a year. In Toronto the average is about 840 a year, according to numbers compiled by Pool and Spa Marketing magazine. Quebec City had more pools installed than Toronto last year.

One must look to much hotter climes for closer comparisons. California and its 37 million residents have about 1.2 million private pools. Quebec has just under eight million residents, meaning there are about 26 Quebeckers for every pool in the province, compared with 31 people-per-pool in the Golden State.

Florida – the Sunshine State, after all – is one of the few places that comes out clearly ahead of Quebec, with a pool for every 19 residents.

Which came first, the prevalence of backyard pools or the increasing popularity of swimming?

It's impossible to say, but there's no doubting that all those pools are part of an aquatic culture in Quebec, from the neighbourhood cannonballer to the Olympic diver.

Twenty-two of the 50 Canadians who will compete in the pools at the London Olympics are from Quebec, about double the province's percentage of the Canadian population. Today's young swimmers are being inspired by Alexandre Despatie and Émile Heymans, the way the pair of divers were inspired by 1984 gold medalist Sylvie Bernier.

"You start out generating a general interest in swimming, and it creates expertise and critical mass. Kids start out learning how to swim, then they learn how to race or dive, and on it goes," he said.

Installers say the recent toddler drownings haven't put a dent in sales, but owners like Ms. Bergeron say they have boosted the level of caution around pools in her neighbourhood.

Many are installing added security, like locks and motion detectors, and imposing new rules. "It's one kid, one adult at our house now," said Ms. Bergeron, who has daughters aged 4 and just under 2.

But, she said, there's no better way to enjoy the summer, and to make sure children learn how to live around water.

Mr. Mew and Ms. Bergeron are split on how popular pools will remain. Ms. Bergeron believes the love of the pool is now entrenched and will be passed down generations.

Mr. Mew believes a decline in wealth will make the backyard pool a luxury fewer can afford.

"I just don't see how it will carry on like this," he said. "People in their 20s and 30s just won't have the lifestyle we had." 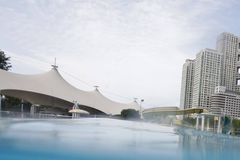 Sudden spike in toddler drownings shocks Quebec
July 12, 2012
Surrey woman who tried to rescue toddler grandson from drowning dies in hospital
July 10, 2012
Follow Les Perreaux on Twitter @Perreaux
Report an error Editorial code of conduct
Due to technical reasons, we have temporarily removed commenting from our articles. We hope to have this fixed soon. Thank you for your patience. If you are looking to give feedback on our new site, please send it along to feedback@globeandmail.com. If you want to write a letter to the editor, please forward to letters@globeandmail.com.
Comments