Jordan McIldoon lived an adrenalin-charged life. Whether tearing downhill on his mountain bike at Whistler, pulling flips on his BMX or riding around on his Harley, the 23-year-old always seemed to be on the go. An only child, Mr. McIldoon lived on his parents' property near Vancouver with his girlfriend, Amber Bereza, and was only a month away from completing his apprenticeship as a heavy-duty mechanic.

Mr. McIldoon was one of at least four Canadians killed when a gunman mowed down hundreds of people attending the Route 91 Harvest Festival on the Las Vegas Strip on Sunday, leaving dozens dead. Three Albertans – Tara Roe, an education assistant, model and mother of two young boys from Okotoks; Calla Medig, who ran a bed and breakfast in Jasper; and Jessica Klymchuk, a Valleyview librarian and single mother of four – also died in the shooting.

Mr. McIldoon's mother and father, Angela and Alan, said in a statement that their son was a "fearless" man who "lived a life full of adventures."

Raised on a Maple Ridge, B.C., acreage, Mr. McIldoon was an athletic outdoorsman, his parents said. He liked to play hockey, snowboard and snowmobile in the winter, and ride dirt bikes or wakeboard at the family cabin at Missezula Lake in the summer.

"He loved riding his Harley Davidson motorcycle and driving his big redneck diesel truck. He loved NASCAR and country music and was rarely seen out of his cowboy boots," they said. "His was a life well lived. He was our only child and no words can describe our pain in losing him."

Before he died, the couple said, Mr. McIldoon made sure Ms. Bereza, who attended the concert with him, was safe. On Facebook, Ms. Bereza's brother credited Mr. McIldoon with saving his sister's life.

Ms. Roe, a native of Brandon, lived in the Calgary bedroom community of Okotoks, where she worked in elementary schools as a teacher's aide.

She attended Route 91 with her husband, Zach Roe, from whom she became separated in the confusion. For a day afterward, her friends made frantic appeals on social media to try to find her.

"It is with sadness, shock, and grief that we confirm the loss of a Foothills School Division staff member," John Bailey, superintendent of the public school system for which Ms. Roe worked, said in a statement. "Our thoughts are with the family and friends of those affected by this unimaginable attack."

Outside of work, Ms. Roe and her husband were busy raising two boys and involved with the local hockey community.

She also modelled with Sophia Models International in Calgary. Sophia president Bill Giofu said Ms. Roe had been with the agency for several years. Despite her busy life in Okotoks, she still worked some Calgary fashion shows and photo shoots. In recent weeks, she had auditioned for a TV commercial.

"She was very outgoing and very smart. She was always in a good mood, and always had suggestions about how to improve things," Mr. Giofu said. "She was very positive. … We just want to say a prayer for her."

In Jasper, the local Legion lowered its flag in Ms. Medig's honour. "A young beautiful lady was taken [too] soon from us," Jasper Royal Canadian Legion Branch 31 wrote on Facebook.

A tourism website for the mountain town 365 kilometres west of Edmonton listed Ms. Medig as the operator of a bed and breakfast named Calla's Palace, a two-storey white stucco home near the centre of town. Ms. Medig's Facebook page said she had attended high school in Jasper and also studied at Red Deer College.

"You were so so loved and I am blessed to have known you," Kendra Farge wrote on Facebook. Dave Cameron said: "You'll be forever missed Calla. Right now there [are] more questions as to how and why this could happen to somebody like you. This feeling of disbelief is unreal."

Ms. Klymchuk, who was in Las Vegas with fiancé Brent Irla, hailed from Valleyview, a town of 1,900 in the Peace River Country in Alberta's northwest. She worked as a librarian, bus driver and educational assistant at a Roman Catholic elementary school.

"She's a very good mother. She's raised four beautiful children," her grandmother, Margaret Klymchuk, told The Globe and Mail earlier this week. Her children range in age from 9 to 15.

Alberta Premier Rachel Notley said flags at the legislature in Edmonton and at McDougall Centre, the provincial government's Calgary office, had been lowered to half-mast in memory of Ms. Roe, Ms. Medig and Ms. Klymchuk.

"On behalf of all Albertans, we are so deeply sorry for your loss," the Premier tweeted. "You are in our thoughts and in our prayers and in our hearts." 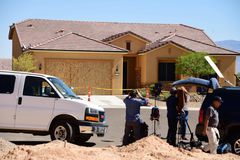 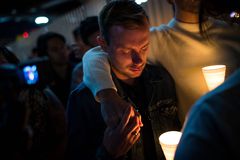 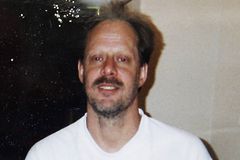 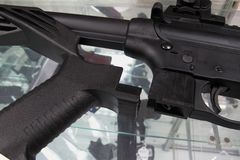 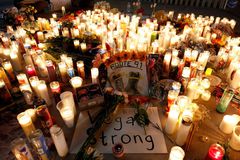 Vegas gunman transferred $100,000 overseas before attack, set up cameras in hotel room
October 3, 2017
Follow Adrian Morrow, Wendy Stueck and Kelly Cryderman on Twitter @adrianmorrow @wendy_stueck @KellyCryderman
Report an error Editorial code of conduct
Due to technical reasons, we have temporarily removed commenting from our articles. We hope to have this fixed soon. Thank you for your patience. If you are looking to give feedback on our new site, please send it along to feedback@globeandmail.com. If you want to write a letter to the editor, please forward to letters@globeandmail.com.
Comments