The families of two women who died in federal custody at a Nova Scotia prison last year are suing the federal government, arguing in part that the Correctional Service of Canada aggravated their health issues by prescribing stints in solitary confinement rather than visits to a doctor's office.

The lawsuits – filed in the Nova Scotia Supreme Court – offer rare, if one-sided, accounts of fatal experiences behind the walls of a federal women's prison.

"I think it's sad that these families, after the death of a loved one, sometimes have their sadness aggravated by the way they are treated by CSC," said Frances Shapiro Munn, the Ottawa lawyer for both families.

None of the allegations have been proven in court. CSC spokeswoman Lori Halfper said it would be inappropriate "to comment on matters before the courts," but added that the agency took prompt action to "analyze our response to these deaths in custody and to make improvements."

Veronica Park, a 38-year-old mother of one, began her stay at Nova Institution for Women in Truro, N.S., on Aug. 14, 2014. According to her family's lawsuit, she coped with her mental-health issues and extended separation from her 18-year-old son by inhaling prescription drugs obtained from other inmates. Prison staff dealt with her issues by sending her to segregation at least three times (for a total of 22 days), cutting off family visits and reclassifying her from medium to maximum security. Together these actions triggered "numerous psychological disorders, including depression," the lawsuit states.

On April 23, 2015, Ms. Park visited the prison clinic twice with a sore throat, cough, body aches and shortness of breath. Nurses declared her lungs clear, gave her a respiratory puffer and sent her on her way. The next day, prison staff found her gasping for air and she was rushed to hospital, where she was diagnosed with a serious case of pneumonia. Her condition proved too advanced, and Ms. Park was dead by 4:30 p.m. Later tests found she had contracted the antibiotic-resistant staph infection MRSA earlier in the month, the lawsuit states.

For the Park family, the heartache was only just beginning. "My mom was perfectly healthy and she dropped dead the day after we buried my baby sister," said Patricia Park, Veronica's sister. "It's been a nightmare."

The Parks, who are asking for $2-million in damages, spent months trying to acquire details about Veronica's death from CSC. Some arrived via an access-to-information request, but other details continue to be withheld.

"When they asked for more info, they were told it was protected," said Kim Pate, executive director of the Canadian Association of Elizabeth Fry Societies, who has worked with the Park family in their quest for answers. "It is outrageous." Three months later, Nova was rocked by another death.

Camille Strickland-Murphy, 22, the subject of the second lawsuit, began her sentence at Nova on Nov. 10, 2014. During a previous stint at the prison, she endured at least two inmate beatings – including one assault that left her with serious head trauma causing seizures, fainting spells, headaches and dizziness. The family alleges that rather than try to diagnose her head injury and treat a variety of complicated psychiatric conditions, CSC staff preferred to place her in solitary confinement, and it lists seven different admissions to segregation totalling 23 days.

She also "engaged in numerous incidents of self-harm and twice attempted suicide," the claim states. "Camille's incidents of self-harm included head banging, attempting to strangle herself in her cell and setting herself on fire." In February, 2015, she cut her neck and face with a razor blade. A month later, she lit her own leg on fire. Despite being urged by social workers to keep Ms. Strickland-Murphy in the mental-health unit, CSC elevated her security status from medium to maximum, the lawsuit claims. On July 20, 2015, she attempted suicide by hanging. She was found unconscious and rushed to hospital. Upon her return, CSC determined she was a low risk for suicide and, eight days after her previous attempt, she was found lying in her cell with a plastic bag over her face and a shoelace around her neck, the family alleges. She was pronounced dead just after 7 p.m.

Both suits make claims of false imprisonment, negligence and violations of Charter of Rights sections guaranteeing equal protection, security of the person, and protection from cruel and unusual punishment. They also state that CSC's decision to withhold information was an act of bad faith warranting damages. Lift the mysteries around the deaths of prisoners in Canada’s jails
August 2, 2016 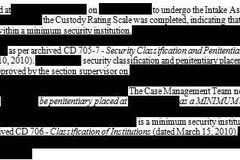 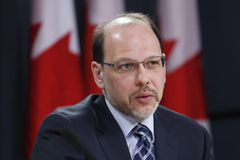