A female  former member of the RCMP Musical Ride is suing the federal government and 13 former colleagues and supervisors, saying that she was repeatedly hazed, insulted and sexually harassed when she joined the force's iconic equestrian show.

In a 41-page statement of claim, RCMP Staff Sergeant Caroline O'Farrell described how she was dragged several times in horse manure and urine, had to put up with crude sexual remarks, was bullied and taunted about a past member who reportedly had killed himself after being hazed.

Her court filing says that after she complained of the way she was treated, one supervisor, Sergeant Michael Roblee, called all 36 Ride members and admonished them.

"He added that, in the past, a member of the Ride had actually been hazed and tied up with leather straps and that the next day he had jumped in front of a Mack gravel truck."

Later, the court file said, while she worked in the stables, she heard mocking comments such as "I know who I would like to jump in front of a Mack truck."

The court document gives no further details about the alleged suicide.

"She was informed by the investigators that her complaint resulted in the largest internal investigation ever conducted in Ottawa, However, the RCMP took no real or substantial action against the harassers," the lawsuit said.

Staff Sgt. O'Farrell's civil suit is the latest allegation made by female Mounties against their employer. Last year, Corporal Catherine Galliford, a spokeswoman who worked on the Air India and Robert Pickton cases, filed a lawsuit. Other female officers then filed a class-action lawsuit for alleged sexual harassment.

The allegations have not been proven in court. The RCMP didn't immediately reply to a request for comments.

The Musical Ride selected its first two female members in 1980, six years after women first gained admittance to the force.

Staff Sgt. O'Farrell's statement of claim says that she joined the RCMP in 1982 and that after working in the Protective Control Section as a bodyguard for dignitaries and as a patroller in the Traffic Section, she started training to join the Musical Ride in April, 1986.

"During her period of training and performance on the Musical Ride, Caroline was the victim of a number of incidents of assault, sexual assault, and other forms of harassment," the court document says.

"Management did not take appropriate action and ultimately condoned the behaviour of other members of the Musical Ride."

During the Basic Equitation Course, she was put through a "horse-troughing" – being hosed with cold water and dragged in horse manure and urine – because she was a "girl on the course," the statement of claim said.

The document said it was done again that summer, with a group forcibly unzipping her coveralls and dousing her just before she was to go to her bachelorette party, prior to her wedding to another Mountie.

On another occasion, her civil suit alleges, she was put on a mock trial and told she either had to give her underwear to a fellow rider or be dragged in horse waste again.

The lawsuit says that, afterward, while still covered in manure, she asked four supervisors "Is this what I have to take to be on the Musical Ride? Is this normal?" and was told to change her behaviour, "effectively making her the culprit instead of the victim."

The court filing also says she saw one of her alleged harasser, Sergeant Kevin Baillie, penetrate a mare in heat with a broom handle.

The statement of claim says that her complaints only lead to more needling and attempts at intimidation.

On one occasion, the document said, someone sabotaged the straps on her horse's bridle so they could have come loose and "resulted in serious injury or death."

She was told the harassment would stop if she submitted to a "good one," her suit says, adding that the group took a vote to see if the practice should be banned and the result, written on a chalk board, said: "The Musical Ride – 35 votes, Wimp – 1 vote."There were two other women in the ride at the time. The statement of claim says one of the other women confided that she didn't side with Staff Sgt. O'Farrell because "it felt good to be part of the group and not at the bottom of the pecking order and the one being picked on."

Some of the incidents were videotaped, the lawsuit alleges, including one where, while she was asleep during a bus ride, a male constable stuck a finger through a zipper and poked at her hair, making her think she had been prodded by a penis.

The court filing says that her supervisors eventually called a meeting with all the Ride members, where two staff sergeants said "the complaint had to be swept under the rug before it got out to the media or to the House of Commons. If it got out, the Musical Ride would be over, maybe the entire RCMP would be over as well."

She was transferred out of the ride in July, 1987, after being told her supervisors "couldn't guarantee her safety," the lawsuit said.

Her parents and husband also made formal complaints and the RCMP's probe concluded there were more than 100 incidents, the statement of claim said.

"The failure to take any steps to prevent, investigate, or punish the criminal assault and sexual assault against Caroline was intentional and deliberate breach of their legal duties as police officers, intended to cause injury to Caroline," the court document said.

It said she suffered from stress from the harassment, which stalled her career and damaged her marriage.

The lawsuit seeks on her behalf and that of her ex-husband and two adult children $5-million in damages from all the defendants, plus $2-million from the federal government of breach of contract and breach of charter rights, and $1-million from five senior officers.

Police watchdog clears officers in Vancouver, Prince George cases
May 17, 2013
RCMP under review over native women after scathing report
May 16, 2013 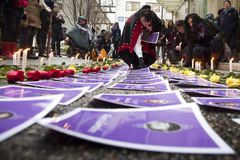