A massive, provincewide effort to restore power to hundreds of thousands of Nova Scotians left in the dark by a winter cyclone has turned lights back on in most communities.

While emergency management officials are in the midst of assessing the damage wrought by a historic, low-pressure-driven storm that began unfolding on Thursday, the number of people without power had been reduced from a total of 280,000 to just over 35,000 by Friday afternoon, said Jason Mew, acting executive director of Nova Scotia's Emergency Management Office.

"There still are widespread outages. There is no question about that. The crews continue to work hard," said Karen Hutt, president and chief executive of Nova Scotia Power.

Nova Scotia Power had 300 crews and more than 1,000 workers spread out at 20 sites across the province ahead of the storm. They were prepared to reverse the outages caused by heavy rains and hurricane-force wind gusts that pummelled the region until midday Friday. At the storm's peak, winds reached up to 170 kilometres an hour in Grand Étang, on Cape Breton Island and clocked in at more than 122 km/h at the entrance to Halifax Harbour.

Combined with high tides, the winds combined to cause a storm surge that resulted in significant damage along many coastal routes, said Mr. Mew. After the rains stopped on Friday afternoon, provincial and municipal officials spent the day assessing the map for damage.

Social media accounts were rife with pictures of washed out roadways, asphalt broken up by the force of water pushing up beneath it and heavy rocks scattered across transportation routes. In back yards, fences had collapsed, barbecues had been tossed onto the grass like children's toys and trampolines had blown across neighborhoods as though they were flying saucers.

Mr. Mew praised Nova Scotia Power for its massive effort to restore electricity throughout the province. He said it is not yet clear how long the remaining outages might last.

A deep freeze has been forecast for Nova Scotia over the weekend. Where comfort centres are needed, Mr. Mew said, they will remain open for residents to warm up and recharge devices.

"We're working really hard to get the power back on for customers to make sure they don't have to experience those conditions without connections," Ms. Hutt said.

Parts of northern New Brunswick saw 50 or more centimetres of snow. "That's a ton of snow," said Environment Canada meteorologist Ian Hubbard. The heaviest snowfall was recorded at Pokemouche, which was buried under 58 cm, while Fredericton reported 25 cm by early Friday.

The president of NB Power said it will be late Saturday before all power is restored across the province. Gaetan Thomas says the number of customers affected by Thursday's storm peaked at 19,000 Friday morning.

The storm tracked up through the Bay of Fundy and over New Brunswick Thursday night, battering Prince Edward Island as it passed into the Gulf of St. Lawrence on Friday on its path to Newfoundland and Labrador, which was also badly hit.

Deep freeze continues in much of Canada as east coast prepares for storm
January 2, 2018 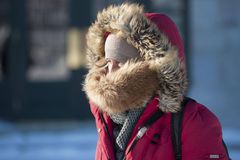 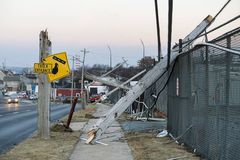 Tens of thousands without power in Maritimes as 'weather bomb' hits
January 4, 2018 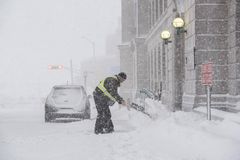