Mandy Gould has spent nearly 13 years as a volunteer firefighter in Caledon, Ont. – a sprawling municipality northwest of Toronto – following her father into a vocation that she aspired to since high school.

For the past 11 years, Ms. Gould has also been a full-time firefighter in nearby Brampton, a suburban city of more than half a million.

Now she and four colleagues are facing charges from their union for "double-hatting," in the latest escalation of a years-long fight that has pitted full-time firefighters who moonlight in their home communities against a union that sees the practice as a violation of its constitution and a threat to membership growth. Volunteers are paid a small amount for each call.

For Ms. Gould, the matter is simple. "I was born and raised in Caledon, so being able to give back to the community that raised you gives you a sense of well-being, of fulfilment, of commitment to the community," she said. "For someone to dictate what I do in my spare time is really hard for me to digest."

Still, the union has been intensifying its campaign against double-hatting. Members of the International Association of Fire Fighters (IAFF) are barred from volunteering as firefighters in communities that fall within the union's jurisdiction, a provision that has led to resignations in Ontario fire departments from Ottawa to Stratford in recent years.

The latest battle was being fought at a closed-door union tribunal at a Brampton hotel on Monday.

"It's a violation of our constitution – and they've all admitted to it in that room here today," said Dan VanderLelie, Ontario Professional Fire Fighters Association 4th District vice-president, who attended Monday's hearing. "So we will have to wait for the trial board to render its verdict."

A tribunal involving four Mississauga double-hatters earlier this year handed down escalating fines starting at $500 a month and suspension from the union until the men resigned from their volunteer positions in the nearby town of Halton Hills, according to a report in the Caledon Enterprise. One of the firefighters resigned before the decision was rendered in February.

Similar punishments are expected in the Brampton case. The tribunal has 60 days to give a decision, said lawyer H. Reginald Watson, who is representing the double-hatters.

Mr. Watson and co-counsel John Gibson are arguing that the province's Bill 109, which became law in 2015, protects firefighters from losing their jobs if they are expelled from the union for engaging in reasonable dissent or for discriminatory reasons.

"Everything they could require, Caledon is going to provide them," he said.

The town, a loose composite of exurban communities such as Bolton and rural hamlets such as Alton, employs just 22 full-time firefighters along with about 250 volunteers. Lack of population density would make full-time fire halls impractical in large parts of Caledon, Mr. Galloway said.

And while volunteers who aren't professional firefighters receive training, the experience of double-hatters is invaluable in a town that can ill afford a full staff of full-timers, he said. The same holds true in small towns across Ontario, just one of two provinces without explicit protections for double-hatters, along with Newfoundland and Labrador.

"The reason the town of Caledon has taken this on wholeheartedly is that this could have huge ramifications across the province," Mr. Galloway said.

Aside from the budgets of Ontario towns, the rights of firefighters are also at issue. The union contends that signing its oath bans members from firefighting on the side – and volunteer firefighters are paid about $50 a call in Caledon – while double-hatters argue that no union should have a say in their private lives.

Wayne Everitt, a recently retired Brampton firefighter who volunteers in Caledon and attended the tribunal to support his former colleagues, said that the camaraderie of the local fire hall makes it more than a part-time gig.

"To give that up would be like cutting off my arm," he said.

Ms. Gould grew up watching her father race off from family events to fight fires as a volunteer in Caledon and caught the bug early, said her husband, Dan Venafro, who is also a volunteer firefighter in Caledon.

"It's a family," he said. "She watched her dad do it for 25 years, getting up at Christmas dinner, at Thanksgiving, at birthday parties, at 2 in the morning."

But the familial bonds of the fire hall have been strained by the union battle, Mr. Venafro added.

"There's a lot of intimidation in this, a lot of bullying," he said. "You know, they say brothers and sisters, but it doesn't feel that way. It feels like two opponents fighting each other."

Union turns up the heat on firefighters who volunteer on days off
September 17, 2014 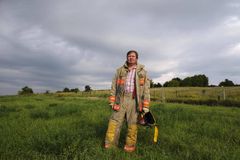 Tension simmers as union targets small-town volunteer firefighters
October 21, 2016
Ontario firefighters’ battle over volunteer work heads to union trial
January 15, 2017
Follow Eric Andrew-Gee on Twitter @ericandrewgee
Report an error Editorial code of conduct
Due to technical reasons, we have temporarily removed commenting from our articles. We hope to have this fixed soon. Thank you for your patience. If you are looking to give feedback on our new site, please send it along to feedback@globeandmail.com. If you want to write a letter to the editor, please forward to letters@globeandmail.com.
Comments