The company behind the Soylent meal-replacement drinks and powders popularized by Silicon Valley has stopped selling its products in Canada, after the Canadian Food Inspection Agency (CFIA) determined they did not meet regulations.

In a letter posted on the Soylent website, Rob Rhinehart, founder and chief executive of Rosa Foods Inc., said the CFIA had recently informed the company that its products failed to meet "a select few" of its requirements for a "meal replacement."

Rhinehart said the company would fully comply, and is working with Health Canada and the CFIA to resolve the issue.

He suggested, however, that the government agency's standards are outdated, stating, "We strongly feel these requirements do not reflect the current understanding of human nutritional needs."

Soylent products have been available in Canada since June, 2015. The drinks and powders, which are meant to be mixed with water, are marketed as nutritionally complete meals that are specially "engineered" to provide 400 kcals per serving and 20 per cent of daily nutritional requirements.

Created by startup workers in Sunnyvale, Calif., who reportedly subsisted on frozen corn dogs and ramen, Soylent has since been dubbed a favourite meal replacement among Silicon Valley tech workers.

The CFIA said it contacted the company early this month.

"As part of routine import inspection activities, the CFIA identified that certain Soylent products were not in compliance with the Food and Drug Regulations with regard to meal replacements," the CFIA said in an e-mail.

The CFIA said further Soylent imports would have to comply with regulations, but noted there was no need to recall any remaining products that are currently on store shelves since there is no immediate health risk to consumers.

Previously, the CFIA recalled Soylent's Food Bar products in October, 2016, due to complaints they made consumers ill.

In his letter, Rhinehart said the company is unable to ship any additional product to its Canadian warehouses or sell Soylent products to Canadians until the issue is resolved. The company had no timelines for resuming its shipments to Canada.

Here are five things to know about Soylent's retreat from the Canadian market:

1. What is the CFIA's definition of meal replacement?

The CFIA defines meal replacement as follows: "A formulated food that, by itself, can replace one or more daily meals."

It points out compositional standards for meal replacements are specified in Section B.24.200 of Canada's Food and Drug Regulations. Among these standards, meal replacements must provide a minimum of 225 kcal per serving. Unless it is a weight-loss product, no less than 15 per cent and no more than 40 per cent of the total calorie count must come from protein.

The fat content can make up no more than 35 per cent of the total energy it provides, unless it is meant to be a replacement for all daily meals, in which case the maximum is 30 per cent.

A minimum of 3 per cent of the calories must come from linoleic acid in the form of a glyceride. The proteins present in the meal replacement must also have the nutritional quality equivalent to that of casein or meet a certain level, calculated by a specific formula.

The standards also include a lengthy table of minimum and maximum amounts of vitamins and minerals per serving, such a minimum of 1.25 micrograms and maximum of 2.5 micrograms of vitamin D; no less than 2.5 mg and no more than 5 mg of vitamin E; between 200 and 400 mg of calcium; and between 2.5 and 5 mg of iron.

2. Who created these standards and when?

3. How exactly did Soylent fail to meet these requirements?

The CFIA was not able to provide details of how Soylent failed to meet the requirements, noting information regarding this issue must be requested under the Access to Information Act.

A director of communications for Soylent declined to answer questions from The Globe and Mail, noting the company's official statements on its website were all she was able to share.

4. The company statement suggested that Canadian requirements are behind the times. Is this true?

Considering Health Canada hasn't changed its regulations on meal replacements since the early 1990s, it wouldn't hurt if the government reviewed its standards, says Andrea D'Ambrosio, a spokeswoman for the Dietitians of Canada and registered dietitian at Kitchener, Ont.-based Dietetic Directions.

"It has been a while [since they've been updated] and recommendations have shifted, technology has advanced," she says.

For example, Health Canada updated its daily recommendations for vitamin D and calcium after a 2010 review.

5. Can any 'meal replacement' fulfill a human's daily nutritional needs?

In short, no, says D'Ambrosio.

Meal replacements can help certain people, such as the elderly, who require a boost in their nutritional intake, she says. But they don't provide all the essential and non-essential nutrients, such as omega-3 fats and fibre, that people get from a varied diet.

Whole foods, on the other hand, contain nutrients that are synergistic, she says. An apple, for instance, has vitamins and antioxidants, that work together and it's difficult to recreate the effect by assembling the separate components.

"It would be better than missing a meal, without a doubt. But would it replace a meal? No, definitely not," D'Ambrosio says. 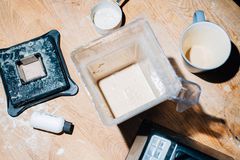 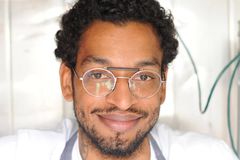 Is this sci-fi beverage the future of food?
November 9, 2014 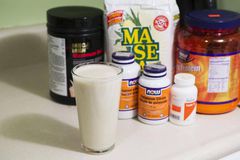