At the Extra Foods in Whitehorse, the produce section was down to radishes.

A few blocks away at the Superstore, it was nothing but coconuts.

Yukoners across the territory are grappling with food shortages after mudslides and washouts along the Alaska Highway, caused by heavy rains and an unseasonably late spring, knocked out their lifeline to the South.

The vast majority of Yukon's food and fuel is trucked north along the highway, which was cut off to traffic late Wednesday night. And while the shortages are not critical at this point, they're putting a spotlight on the growing dependence of food shipments and the unique difficulties of living in the North.

"Yukoners are pretty tough people," Superstore manager Roger Brown said. But with little left on the shelves Sunday, the store decided to charter a Hercules to fly in six loads of groceries, with the first stock arriving later that day.

Tim Hortons also opted to fly in coffee and doughnuts, as the crullers and fritters ran low. "We're used to getting three trucks a week," said owner Doug Terry, who flew in more than 2,200 kilograms of product. "We did it at a loss," he added. "We were not willing to sacrifice the loyalty we built up."

Whitehorse youth counsellor Mark Kelly turned to Facebook. "Will trade moose for vegetables," he posted Sunday. While local graphic designer Guiniveve Lalena posted: "The highway is out and I'm using powdered milk that expired in 2008. I need to plan better."

Highway crews were already working on Wednesday's slide, between the southern Yukon towns of Watson Lake and Teslin, when another section of highway washed out to the north early Thursday morning.

"It was basically three rivers where the road used to be," said Yukon Highways and Public Works assistant deputy minister Allan Nixon.

Over the next 24 hours across the territory, a number of other roads and highways were washed out.

Rising water levels also forced the RCMP to evacuate 24 residents living in Lower Post, B.C., on the Yukon border, as well as residents of 11 homes in the tiny Yukon community of Upper Liard, according to Yukon Community Services spokesperson Matt King.

"We've had significant landslides and washouts before, but nothing on this scale," Mr. Nixon said on Monday. "Our highway crews have been working around the clock."

At the Rancheria Hotel Lodge, off of the Alaska Highway, motorists and truckers have been stranded since Thursday, with the mudslide to the south and the washout to the north. "It's a major disaster – we should be on the news," said owner Linda Bouchard by phone, talking over music and laughter on Monday. "The old-timers have never seen anything like this.

"But we have a fuel truck stuck here, and a food truck, so we aren't going hungry."

But not all Yukoners are feeling the pinch.

Bev Gray spent the weekend gathering spruce tips, fireweed greens and stinging nettles to feed her family, just outside Whitehorse. "Even though we have no roads due to the washouts, we have an abundance of nutritious wild plants that we can harvest for food," said the local author and owner of Aroma Borealis Herb Shop.

Highway crews expect to soon complete a makeshift road, which will allow for controlled access along the Alaska Highway. And there should be a two-lane detour with a single-lane bridge ready for traffic by mid-week, Mr. Nixon said.

But when it comes to repairing some of the other roads, things remain a little muddy. "We wont be able to do anything on the Nahanni Range Road until the water drops," he said.

Cantung, a tungsten mine employing upward of 200 in the western Northwest Territories, relies on the Nahanni Range Road to transport staff and supplies through the Yukon, while the Yukon's Wolverine Mine, also employing roughly 200, is facing similar problems with washouts along the Robert Campbell Highway.

"This just reinforces how important our transportation network is, and how dependent we are on highways," Mr. Nixon said.

Ultimately, it was an opportunity to eat locally, Yukon musician Kate Weekes said.

"This could create a more sustainable reality, one that is hard to imagine for those of us used to eating an international diet seven days a week.

"Most people in the world have less access to food than we do – our 'crisis' situation is their everyday reality."

Special to The Globe and Mail, with a report from Ian Stewart in Whitehorse 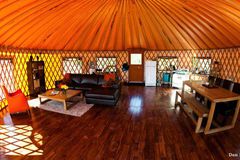 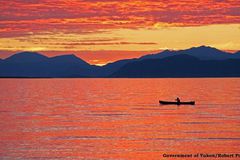