Maureen Smith's daughter just moved into a duplex after nearly two decades of waiting. Susan MacIsaac's son isn't so lucky. Despite a six-year wait, he was rejected for funding that would see him live in his own home.

"We put together a proposal and we got turned down. To this day, we do not know why," says Ms. MacIsaac at the kitchen table of her north Toronto home. Son Graham MacKenzie, 30, slowly moves his fork into a half-cut strawberry, the lids of his round, dark eyes left heavy from a seizure the day before.

For parents of people with an intellectual disability, the quest to find a home and services starts early and can last decades – something that becomes more pressing as parents age and their ability to physically and financially support their adult children fades. One Toronto man has been waiting an astounding 37 years for placement in a group home. Another middle-aged man recently moved into a nursing home with his mother, after his father abandoned the search for housing elsewhere, because the average wait in Ontario for nursing homes is only about 80 days. Even community housing – with queues of a dozen years in some cases – doesn't rival the waits of people with an intellectual disability.

The housing crisis follows the closure over the years of institutions that cared for them from cradle to grave. Today, for example, there is one home each in Red Deer, Portage la Prairie and Moose Jaw, and the latter one is slated to close.

"This situation represents an injustice being done to persons with intellectual disabilities and their families," said Don Gallant, co-ordinator of the Canadian Association of Community Living's community inclusion initiative, a national program aimed at ending the isolation of people with intellectually disabilities. "To deny people an opportunity to live in the community is a denial of a basic right of citizenship."

There are no national figures on the number of people waiting for residential housing. But Michael Bach, executive vice-president of the Canadian Association of Community Living, estimates there are 686,000 intellectually disabled people across the country and one of their biggest issues "is having access to suitable and affordable housing in the country."

In Ontario, 12,000 people are in the queue for residential housing. Garry Pruden, chief executive officer of Community Living Toronto, a federation of agencies providing services and supports to those with intellectual disabilities, describes the wait as "oppressively long."

Provinces are spending money to address the situation. Ontario, for instance, invested $1.7-billion in developmental and residential services in the 2011-2012 fiscal year. That province's Minister of Community and Social Services, John Milloy, said he is aware of the sacrifices families are making, saying he would never want to minimize the need.

"I'm aware there is more demand than available resources out there," Mr. Milloy said. "I have a tremendous sympathy; I understand the challenges they are facing."

Experts say the issue is far bigger than just increased government funding. The solution needs to be found also with the non-profit sector and business, in addition to families. If it takes a village to raise a child, it may take savvy social enterprisers to raise people with intellectual disabilities.

"The old way, every one relied on government," said Al Etmanski, co-founder of PLAN, a non-profit social enterprise. "The new way is to lever government money to attract new resources from families, community, philanthropists, social investors and business."

He helped kick-start the federal government's Registered Disability Savings Plan, which began in late 2008 and provides incentives and grants to save for future income security for all people with disabilities.

"With the combination of compound interest and all that matching money, if parents started when their child was born, that child would have close to $400,000 when turning 39," said Mr. Etmanski, whose daughter, Liz, in her 30s, teaches art, writes poetry and is thriving in her own Vancouver apartment.

Other suggestions include finding ways to remove people with disabilities from the welfare system and for governments to create an innovation fund to test and help implement new ideas. Others talk of the need for more affordable housing and having host families that intellectually disabled people could live with, much like foster families exist today.

In Biggar, Sask., Laurie Larson has two sons with disabilities, Ben, 24, with autism and Kevin, 20, with Down syndrome. For her, the ideal solution would be to have some form of individualized funding so she could hire the supports herself.

Under that method, she would use her own money for a down payment on a house, and then help hire caregivers for her sons. This, she believes, would actually save government money.

"The only option [right now]is to go to a service provider who runs a group home, assuming you can find one with an empty bed," said Ms. Larson. "The big thing is to try and get changes but change happens slowly."

"Slow," is the way Maureen Smith would describe the length of time it took to arrange support for her 41-year-old daughter, who moved out of the house earlier this month to a duplex in Toronto. Her daughter, whom she did not want named, was on the wait list for about 20 years for the 24-hour care-giving services that make living away from home possible. Ms. Smith pays for the house but the care is funded through government.

"It's very, very difficult to get housing and to get funding," said Ms. Smith, whose daughter is developmentally delayed, aphasic and suffers from allergies and mental health issues. "What's expensive is staffing. It has to be seven days a week."

It may be a while before Graham MacKenzie can get out of the house. He was born missing the right side of his brain and the structure that divides the cerebrum into the left and right hemisphere – the corpus callosum. He also has cerebral palsy.

To compound matters, he's had two brain bleeds due to arterial venous malformations in his brain. Before those bleeds, he could ski downhill and go out by himself; today he can only walk a few steps and must always be accompanied. Like his mother, he has an effervescent personality and is social. He swims, goes to dances and takes art classes.

His mother, Susan MacIsaac, 60, bids on management consultant contracts and works from home to care for him during the 113.8 hours a week that are not funded; he has funded caregivers for 54.2 hours a week.

"My nightmare," she says, "is that something happens to me and there's no option and he ends up in long-term care."

She is currently exploring a program called LIGHTS, paid for through fundraising and families, with some money from Community Living Toronto and government.

If Ms. MacIsaac qualifies, she would pay at least 20 per cent of all costs, and her son matched with someone with whom he's compatible. Because they are splitting living expenses and care-giving costs, plus receiving government funds, it's more affordable.

LIGHTS founder Mary Pat Armstrong said she hopes that after five years of being in the program, each family has secured funding from government or other sources. So far, 46 families have a plan in the works for housing and services in Toronto.

That is the next best option for Graham, who hearing this talk, has just looked up from his breakfast plate, now empty. When asked what it would be like to live on his own, he described it as "awesome.

Graham MacKenzie was born intellectually disabled with cerebral palsy. The brain bleeds he has suffered have reduced his ability to walk more than a few steps. He requires round-the-clock supervision.

Following is his annual budget if he were to live away from home with a roommate and a live-in caregiver.

Rent, including his portion for the live-in caregiver: $16,800

Program transportation (for Graham and his portion of the caregiver's cost to accompany him) $2,268

Cost of wheelchairs and making his apartment accessible: covered through the provincial and municipal governments. Graham gets a new wheelchair every five years.

Central administration, which includes the cost to administer bills, oversee caregivers and have proposals done on his behalf $4,130

What are the rights of a worker on indefinite sick leave?
April 10, 2012 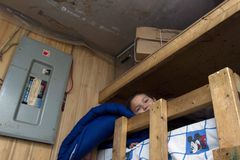