A top Ontario educator urged people he met online to "sadistically sexually assault" their children in his quest for sexual thrills, an Ontario judge said in sentencing him to three years in prison.

Benjamin Levin, who once served as deputy education minister in Ontario and Manitoba, "appeared to have it all," Judge Heather McArthur said in her decision.

"He was respected by friends and colleagues and was considered a leading authority on education. He had a loving wife and three grown daughters who treasured him," she said.

But Levin also had a "hidden dark side," the judge said.

"Unbeknownst to his friends, colleagues and family, he had become deeply immersed in a deviant and depraved online world."

Levin, 63, pleaded guilty to possession of child pornography, making child pornography — a charge stemming from an explicit story he wrote — and counselling the indictable offence of sexual assault. He was originally charged with seven child porn-related offences.

In conversations he had online, Levin claimed to have sexually abused his own daughters, but "there is no evidence that he ever had sexual contact with a child," McArthur said.

She noted that Levin, who kept his head bowed for much of the sentencing, appeared "genuinely remorseful" and was deemed to have low risk of reoffending by a forensic psychiatrist.

Levin has said in a written statement that he's "deeply ashamed" of his actions.

Many of his friends and former colleagues have penned letters to the court lauding his contributions to education. His daughters have sworn in writing that he never abused them or behaved in a sexually inappropriate way in their presence, and his wife of more than 36 years said she still loves him and will continue to support him.

"This acceptance will be an important aspect of his rehabilitative efforts," the judge said.

Court has heard Levin used to frequent a website with numerous chat rooms for the discussion of sexual activities.

Among the people he chatted with were an undercover officer in Toronto, one in London, Ont., and one in New Zealand — all posing as women interested in sexual activities with children.

In one case, Levin wrote a story detailing "the violent sexual assault of a 10-year-old girl" for an officer pretending to be a single woman interested in incest fantasies.

In another case, he "counselled another officer posing as a young mother to sadistically sexually assault her eight-year-old daughter," McArthur said.

At no point did he clarify that it was purely a fantasy, or take steps to find out whether any real abuse was occurring, McArthur said.

"Mr. Levin knew that the person he was chatting with online might be real and that an actual eight-year-old girl could be repeatedly sexually assaulted at his direction," she said.

"He didn't care. Mr. Levin recklessly pursued his own selfish sexual urges, all the while knowing an innocent young child could be abused as a result. Mr. Levin's moral blameworthiness is extremely high."

Levin was arrested in July 2013 when a search warrant was executed at his home. He was a university professor at the time.

As part of his sentence, Levin is barred for five years from going to parks, schools or community centres where children might be, unless supervised by an adult aware of his situation. He also faces a five-year ban on working or being in contact with children unless supervised, and on using the Internet for anything but work or education. He must also submit a DNA sample to authorities.

Toronto police Det. Const. Janelle Blackadar, who posed online as the mother of the eight-year-old girl, said she hopes the case sends a clear message to any others involved in child pornography.

"If there are offenders that are out there, if they're doing things online... I hope everybody knows we will stop at nothing to make sure that they are arrested and victims are saved." 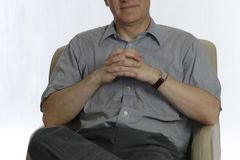