Former Ontario Progressive Conservative leader Patrick Brown was in talks to sell an interest in a restaurant he partially owns and some Aeroplan miles for $375,000 to a man who went on to become a Tory candidate, documents show.

An affidavit detailing a deal was sworn five months before Jass Johal was acclaimed as the candidate for the PC Party in a new riding in the suburban 905 region around Toronto. According to a copy of the affidavit shown to The Globe and Mail, Mr. Johal, a paralegal who lives in Brampton, says he agrees to purchase two million Aeroplan miles and an ownership interest in Hooligans restaurant from Mr. Brown for $375,000. "The amount is paid by certified draft from Bank of Nova Scotia," says the affidavit dated June 11, 2016 and signed by Mr. Johal.

Opinion: Patrick Brown shows it's all about him, no matter the collateral damage to Ontario PCs

When asked about the deal described in the affidavit, Mr. Brown responded in an e-mail to The Globe on Sunday: "I have no business dealings with Mr. Johal. No deal was ever done."

Other documents The Globe has seen, including bank statements, show that Mr. Brown deposited $375,000 into his personal account at Canadian Imperial Bank of Commerce one month after the affidavit was signed, on July 11, 2016. Later that month, property records show he purchased a waterfront house on Lake Simcoe's Shanty Bay for $2.3-million. He took out a mortgage of $1.72-million from Toronto-Dominion Bank, according to public mortgage documents.

When asked about that, Mr. Brown, who earned $180,886 a year as leader of the Official Opposition, responded in the e-mail: "Like many people in Ontario, I received help from my family purchasing my home."

The Globe initially sent a series of questions to Mr. Brown on Saturday evening. After his initial response on Sunday, The Globe sent followup questions later that day seeking clarification on a number of points, including why an affidavit was prepared if there was no deal.

A spokeswoman for Mr. Brown first said that the affidavit was "put together on a deal that was never done." Later, she said the affidavit "doesn't illustrate the deal falling through." She reiterated that the $375,000 came from his family to help with the house purchase.

He also declined to answer a question about why the amount agreed to in the sworn affidavit was exactly the same as the deposit a month later into his personal account.

Mr. Brown dismissed questions about his personal finances as part of an ongoing plan by his unnamed detractors to attack him. "I'm deeply disappointed to see that the forces that were out there 3 weeks ago are back again today," he said in the e-mail. "They are working against the people of Ontario, and our Party."

On Jan. 25, after CTV aired allegations of sexual misconduct involving two women, Mr. Brown was forced to resign as leader of the party. A week ago, he began waging a campaign on social media and in interviews with the Toronto Sun and Global News to clear his name, accusing CTV of fabricating a "malicious and false report." CTV has said it stands by its reporting.

Last Friday – the same day interim leader Vic Fedeli removed him from the PC caucus, leaving him sitting as an independent member in the legislature – Mr. Brown jumped into the leadership race, seeking to win back his old job. He held a leadership launch in Mississauga on Sunday, where he said he should lead the Tories into the provincial election on June 7.

Mr. Johal did not respond to half-a-dozen e-mails and telephone messages from The Globe on Sunday and Monday. The Brampton lawyer who notarized the affidavit confirmed Mr. Brown's account. "Mr. Brown did not want to sell his interest in the business," Satinder Johal said in an email to The Globe late Monday night. "There was no exchange of aeroplan miles, interest in Hooligans or funds. There was an amended affidavit a few days thereafter confirming that the deal was off."

After the Globe published the story, Mr. Brown tweeted out a picture of an affidavit dated June 16, 2016 he says proves there was no deal. "I am making this affidavit to prove that there is no transaction that will be taking place, there is no exchange in funds, aeroplan miles or any interest in Hooligans," the affidavit sworn by Mr. Johal reads.

Mr. Johal was acclaimed as the Tory candidate for Brampton North on Nov. 21, 2016, according to a news release from Mr. Brown congratulating him. In May of that year, the month before the affidavit was sworn, Mr. Johal held a fundraiser at his residence featuring Mr. Brown. "Thanks to my friend Jas [sic] Johal for hosting a great BBQ fundraiser at his home in #Brampton this evening," Mr. Brown said on Twitter on May 1, 2016.

The affidavit does not attach a dollar value to Mr. Brown's Aeroplan miles or say how many shares Mr. Johal was to purchase in Hooligans. Based on the value of $0.0120 for each Aeroplan mile, according to ratehub.ca, two million miles would be worth $24,000.

Under Ontario's integrity rules, MPPs are required to file annual financial statements with the Office of the Integrity Commissioner, disclosing their income, assets and liabilities.

In Mr. Brown's most recent statement dated Sept. 1, 2017, he says he owns a 9.9-per-cent interest in Hooligans, a restaurant in his hometown of Barrie that prior to 2015 was a nightclub called The Bank. His interest in the restaurant has increased from the 7-per-cent stake disclosed in his 2016 and 2015 statements.

At a news conference on Tuesday morning, Mr. Fedeli declined to say whether he was aware of the proposed deal.

"In fairness to all the (leadership) candidates," he said, "I cannot comment on one candidate over the others."

However, he said he wrote to the PC Party Executive on Friday -- before Mr. Brown jumped into the leadership race -- that he has no confidence in his predecessor running as a PC candidate in the upcoming provincial election.

The party has been dealing with other issues in the wake of Mr. Brown's resignation. Since taking over as interim leader of the party last month and vowing to "root out the rot," Mr. Fedeli says he has uncovered numerous problems.

He has announced that the party has one-third fewer members than his predecessor had claimed. He has overturned two of the more than a dozen nomination races plagued by complaints of voter fraud and broken rules. And his office has initiated a review of various financial arrangements at the party, which is ongoing.

The fallout from Mr. Brown's resignation as leader has exposed a deeply divided party. His detractors, including a majority of Tory MPPs, have said that the inflated party membership numbers and the nomination races that ended in controversy, including the riding of Hamilton West-Ancaster-Dundas, where police have launched an investigation into ballot-box stuffing, reveal problems during Mr. Brown's 2-and-a-half years at the helm.

Randy Hillier, the Tory MPP for Lanark-Frontenac-Lennox and Addington who is supporting former Tory MPP Christine Elliott's leadership bid, said on Twitter on Sunday that Mr. Brown is "unfit to be the leader of the PC Party and he is unfit to be premier."

But Mr. Brown enjoys the support of many PC candidates for the coming election, 18 of whom were at his kickoff in Mississauga on Sunday, including sitting MPPs Toby Barrett, the PC MPP for Haldimand-Norfolk, and Ross Romano, the PC MPP for Sault Ste. Marie.

Mr. Johal, too, has expressed his backing of Mr. Brown, recently saying on Twitter, "He is always our leader."

The PC Party will announce the winner on March 10 in one of the shortest leadership races in Canadian history and just three months before voters in Ontario go to the polls. 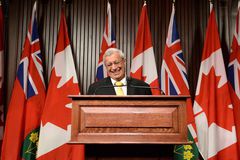 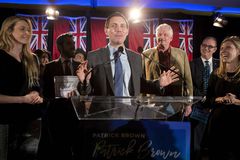 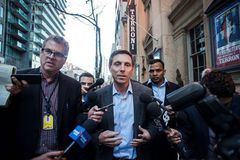