The former deputy premier of Saskatchewan has been fined and lost his licence for a year for driving with 2 1/2 times the legal amount of alcohol in his system.

Don McMorris pleaded guilty Wednesday to having a blood-alcohol level over .08.

"I just want to say that I'm extremely embarrassed and ashamed of my actions that day. There is no rationale. There is no excuse that could ever be given," McMorris told provincial court Judge Barbara Tomkins.

"I know so much better than that. It's been my life's work to prevent that very thing."

Court heard RCMP received two calls about an erratic driver at 11:30 a.m. on Aug. 5. Video showed a car "weaving back and forth" across the road, the Crown said.

McMorris, who was driving a government car, was pulled over by officers in a construction zone on the Trans-Canada Highway east of Regina.

Defence lawyer Aaron Fox said McMorris had been drinking while watching a football game and visiting with an old friend the night before. The politician thought he was OK to drive the next morning, said Fox.

"This is a situation where he clearly made a very bad decision that day," said Fox.

Tomkins said it was troubling to see such a high blood-alcohol reading at that time in the morning after drinking the previous night.

But she also said McMorris showed genuine remorse and is seeking help.

"I'm impressed with the way you say that you're ashamed. It's a word I hear too rarely in this courtroom," said the judge.

She also noted that McMorris has already lost credibility with the public and fined him $1,820 instead of the $2,000 the Crown had suggested.

McMorris resigned from cabinet after announcing he'd been charged. He also left the Saskatchewan Party's caucus.

He was a key member of Premier Brad Wall's government. In addition to being deputy premier, McMorris oversaw the province's liquor and gaming authority, was the minister of Crown investments and was responsible for Saskatchewan Government Insurance, the government's publicly owned automobile insurer.

He is also a former health minister and highways minister.

McMorris said outside the courthouse that he is lucky no one was hurt and that he knows he let a lot of people down.

"I would do anything if I could change that day, but I can't. I can't live in the past. I've beat myself up for the last month over my actions and I can't change them, so all I can do is move forward," he said.

"I have accessed the help of counselling already and will continue to do that into the future. I need to make some changes in my life and I'm committed to that, so that this never, ever happens again." 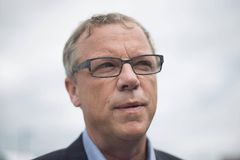 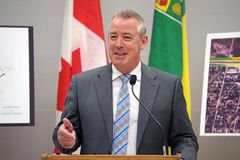