Two of Canada's former top cops – one of them recently a Conservative cabinet minister – are helping launch a new prescription-marijuana business.

Julian Fantino and Raf Souccar are executives with a business that will open a storefront clinic in a strip mall north of Toronto in the coming weeks.

Vaughan-based Aleafia Inc. is not a marijuana dispensary. It aims to be among a new breed of corporate go-betweens, a "total health" provider that creates treatment plans for prospective medicinal-marijuana users and connects them with cannabis products from licensed growers.

The fact that the business will not grow, sell or handle marijuana itself should not detract from the obvious irony of two former chief cops becoming cannabis middlemen. Both readily admit they were once outspoken about the dangers of the drug – and the politicians who would relax its prohibition.

"In my mind, having grown up in policing and so on, medical users were – for lack of a better term – dopeheads," Mr. Souccar, a former undercover drug officer and RCMP deputy commissioner, said on Friday sitting with Mr. Fantino in a boardroom at the company's office on Jane Street. Mr. Souccar is Aleafia's president and chief executive officer.

Mr. Fantino, who headed the Ontario Provincial Police and Toronto Police Service before becoming a cabinet minister in Stephen Harper's government, is the company's executive chairman.

"What I said then was then, what I say today is my value system today," Mr. Fantino said.

Mr. Fantino explained: "We're talking about the medical benefits that have evolved and been tried and proven … it's been a matter of informing myself, educating myself."

On a tour of their company's nearby clinic, they said the company will bring osteopaths, chiropractors, doctors and nurses to cater to patients there soon.

Aleafia is clearly in the early stages – a bank of workout machines, computer monitors, and medical-examination tables are slowly emerging from cardboard and bubble wrap. The hope is to be operational later this fall.

What makes a career cop change his mind about a drug? Mr. Fantino said it was his time as Veterans Affairs minister, seeing how Afghan war veterans were turning to prescription marijuana to deal with anxiety, sleep disorders and post-traumatic stress disorder.

Statistics show that when Mr. Fantino took over Veteran's Affairs in 2013, it was spending about $400,000 a year to help just over 100 veterans fill their prescriptions. When he left two years later, it was spending $20-million for more than 1,700 veterans.

Since then, under both Liberal and Conservative governments, the numbers have exploded. On Friday, the department told The Globe it expects to spend $90-million reimbursing veterans in the coming fiscal year.

That growth curve helps explain the potential business case for go-between companies such as Aleafia, which plans to sell client-treatment plans and get percentages of profit from product sold by growers it recommends. The niche fills a void – the federal government may license growers, and allow prescriptions, but does not put marijuana in people's hands, or monitor how they use it.

Should marijuana be smoked or ingested? Should it be heavy or light on psychoactive elements like THC? How does it affect pre-existing medical conditions? These are the sorts of questions Aleafia hopes to address for each client.

Demand for such services could grow, especially if police, firefighters and emergency workers are allowed to use medical marijuana for work-related ailments, and workplace insurance plans begin covering it. In February, an Aleafia vice-president – Marisa Cornacchia, a registered nurse at Sick Kids – addressed police chiefs about trends in mental health care for officers. Corporate records show the company was founded early this year by William Car, a Vaughan-based entrepreneur.

Mr. Souccar was a member of the Liberal government's task force on decriminalizing marijuana. He said that work allowed him to meet people on prescriptions.

"They were people no different than me," he said. "People with careers, and jobs and well educated, and all they wanted was some sort of normalcy back in their life. To be able to live a pain-free life, to be able to sleep at night, to be able to be productive like they once were."

"Cannabis can be used to get people off of opioids," he said, adding that he regrets seeing medicinal marijuana users as "dopeheads."

As for Mr. Fantino, he simply says the new business shows how people can change.

"We have evolved. In our drug squad days we kept locking people up. Did we care about this other stuff? Not really," he says. "This was our job right? But eventually in your life and your career you become more aware." 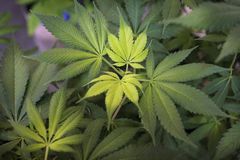