Fort McMurray's mayor says it's not certain that her city's most severely damaged neighbourhoods will be rebuilt following a wildfire that swept through them more than a month ago.

With the process to get Fort McMurray's residents home completed with few problems, Mayor Melissa Blake said on Sunday that she is optimistic her citizens' resilience in the face of crisis will carry through what will be a long and arduous recovery. Many were shocked by the devastation they saw.

The city's residents face tough decisions about rebuilding of the Abasand, Beacon Hill and Waterways neighbourhoods, which took the brunt of the damage when the fire roared in on May 3, Ms. Blake said. Much of the three lay in ruins with only scorched foundations where houses once stood.

Building anew in other locations may have to be considered, she said in an interview.

"There's a huge expense for people who still have a home, but for people [whose homes] have burnt down, it might be easier for them. But there's no way I can contemplate what it'll look like in the future without a broad consultation at the community level," she said.

"People are very passionate about where they've been. I grew up in both Abasand and Beacon Hill and I have fond memories walking those streets, playing in those parks and having friends and neighbours there. Those are things people are going to be hard-pressed to give up," Ms. Blake said.

The mayor spoke following the staged return of residents that began on Wednesday, nearly a month after fire raged through parts of the city, triggering the largest mass evacuation in Canadian history. She estimated that less than half of the city's more than 80,000 people returned, though by the weekend signs of recovery abounded across town, with stores and restaurants reopening, albeit at reduced capacity in many cases.

Still, the extent of the damage in some areas is so severe that it is not clear that all will be put back to what it was before the disaster. Some are eager to rebuild, including Brian Jean, the leader of Alberta's Wildrose opposition party. Mr. Jean is a long-time resident of Waterways and has already filed plans with the city to rebuild his home in the area.

The region's recovery czar said the re-entry of residents went as smoothly as could be expected, even if fewer people than expected came back. "The planning, the process, the way it unfolded – I can use the word – it's remarkable," said Bob Couture, director of emergency management for the municipality.

"Similar to the evacuation, when we got everybody out safely – though without any planning – we've returned our residents to our city without any impediments or significant issues."

One snag was the decision to delay residents' return to the three most damaged communities, when it was determined that houses that did not burn still posed health risks. "We had to react to that and come up with a plan of how we could accommodate the needs of those citizens to ensure they have access to their properties," Mr. Couture said.

On Sunday, teams were combing the wreckage in those areas for anything that may have survived the inferno, though the intense heat left precious little to recover.

Ms. Blake is the mayor of the Regional Municipality of Wood Buffalo, a sprawling area that covers much of northeastern Alberta and encompasses the community of Fort McMurray. With a state of emergency declared in the area until the end of June, the mayor said she will be looking to recoup the $250-million the municipality has spent since Fort McMurray was evacuated on May 3.

"Because it is a declared state of emergency, we'll be eligible for funding, either provincially or federally, to cover off the big expenses," she said, adding that the figure includes everything from food and accommodation charges to staffing costs related to evacuating and reoccupying the city.

With one-tenth of the city destroyed in the inferno, the municipality will need to adjust its budget. The cost of rebuilding neighbourhoods will be substantial and could last years.

The mayor said she was shocked by the extent of the damage but is looking forward to bringing her children back next weekend for their first look at the city. Her two boys, ages 7 and 12, are currently attending school in Edmonton and the family will return to Fort McMurray once their studies finish at the end of June.

Despite the devastation, Fort McMurray has already begun the long voyage toward recovery. Green shoots have started sprouting in the blackened forests surrounding the city, using the fallen trees as crutches as they grow. Municipal workers James Semple and Alex Barnes planted flowers in pots on the centre median of the city's main drag on the weekend to the delight of motorists. Just a few weeks ago, such an activity would have been seen as unnecessary and even a waste of resources.

"Everyone who's passed me seems to say, 'Thanks for doing that,' and seems to be happy," Mr. Barnes said. "It brings some normalcy to the city." 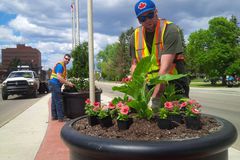 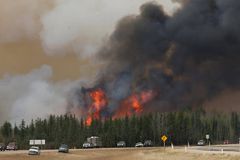 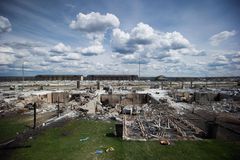