A liberal blogger with Canadian connections facing 1,000 lashes and 10 years in a Saudi jail has exhausted his final legal recourse.

Mr. Badawi's supporters in Canada say they never held much hope a court would overturn his sentence. True to their expectations, Saudi Arabia's Supreme Court upheld the sentence Sunday, but reports from Saudi Arabia were not clear on the details of the ruling. The Associated Press reported that the flogging portion may have been dropped.

"I want to keep fighting and I will, but today I lost some hope," Mr. Badawi's wife, Ensaf Haidar, said Sunday from her home in Sherbrooke, Que., where she lives under refugee status along with the couple's three children.

Ms. Haidar said she last spoke to her husband three days ago. He has recovered from the 50 lashes he received in January in the initial instalment of his punishment, but he is still "not well." He was supposed to receive his lashing sentence over 20 weeks, but Saudi officials have postponed the punishment since.

"It's scary. He is afraid," Ms. Haidar said, adding she believes the whipping will resume next Friday.

Mr. Badawi has been imprisoned since 2012, convicted of insulting Islamic religious figures on his blog. He was also banned from travelling abroad for 10 years after his prison term.

In January, security officials flogged Mr. Badawi outside a mosque in Jiddah. Saudi rights activists said it was meant as a warning to others who might think to criticize the religious establishment, of which the ruling family derives much of its authority.

Subsequent floggings were halted as the Supreme Court reviewed the case. A person close to the case, who spoke to the Associated Press on condition of anonymity for fear of retribution, said that because Mr. Badawi's flogging has been halted since January, the Supreme Court ruling may exclude lashings. It was not immediately possible to clarify the details of the ruling.

Ms. Haidar has travelled extensively to seek international backing for Mr. Badawi's release and she has had some support in Britain and France.

The Liberal opposition in Ottawa and the Liberal government in Quebec have urged Prime Minister Stephen Harper to push more strongly for the release of Mr. Badawi, who is a Saudi national.

Foreign Affairs spokesman Nicolas Doire said Ottawa will "continue to make our position known publicly and through diplomatic channels" even though Mr. Badawi is not a Canadian citizen. The punishment is "a violation of human dignity, and we continue to call for clemency in this case," the statement said.

The Quebec government has advocated for Mr. Badawi's release, earning a rebuke from the Saudi government, which told the province to butt out in April.

"Sunday's decision is shocking and disappointing, but not enormously surprising. We knew there was little chance the court would overturn the decision," said Quebec International Relations Minister Christine St-Pierre. "The sentence is cruel and inhuman. We cannot stay silent, especially because there is a woman here who needs her husband and three children who need their father. If we all allow this story to be forgotten, it's over."

Amnesty International called on the Canadian government to speak up more forcefully. "We've had no word from them," said Amnesty spokeswoman Mireille Elchacar, who was with Ms. Haidar on Sunday.

"We need Harper himself to speak up and ask for his release. And not only that, but to work for the reunification of the family in Canada." 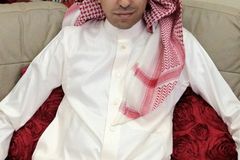 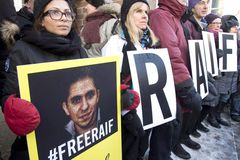 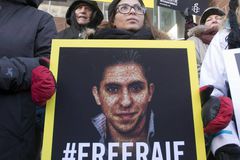