For a country that considers itself the superpower of cuisine, France has been behind the curve on kale.

When Jour, a sleek Paris lunch chain introduced kale to its menu of customizable salads for the first time this month, puzzled customers noticed the servers were wearing "We (Heart) Kale" buttons, and asked them: "Who is kale?"

"It was so lost and forgotten that no one knew it any more," says Kristen Beddard, an American who consulted on the menu.

There is no single reason why kale has languished here for decades – although farmers, growers and agriculture experts have a cornucopia of theories: that older generations no longer wanted to eat anything cabbage-related after the war, that stemmed cabbage (as opposed to cabbage heads) were considered rabbit grub, that the axis of agriculture shifted to the south instead of the north where kale thrives.

Show most French people a picture of kale and it is as if they're looking at an alien vegetable.

Compare that to the veritable kale craze in North America. The Big Carrot – a natural food market in Toronto – has doubled its weekly kale order over the past three years.

Among the French, cluelessness is giving way to curiosity. But will locals get revved up over kale salads and vegetable juices the same way they do about Beaujolais and foie gras?

Phyllis Flick, a contributing editor to the popular website Paris By Mouth, notes that while the French maintain a healthy diet, they don't "break things down into vitamins and nutrients. So if the taste isn't there they won't like it just because it's good for you."

And until recently, kale was impossible to find. There would be "rumours" of its appearance occasionally at the farmers' market stand run by well-known produce supplier Joel Thiebault.

Organic farmer Hermione Boehrer started to grow kale in the fall using seeds from the United Kingdom and has recently begun selling bunches of baby leaves at weekend organic markets in the 17th and 6th arrondissements. Other vendors at these markets have started ordering kale from farmers located in Brittany and Normandy, now that there is demand.

Kale is also appearing on more restaurant menus, now that Terroirs d'Avenir, a distributor run by Alexandre Drouard and Samuel Nahon, who adhere to the Slow Food movement and specialize in local produce, has been offering bunches of the curly variety and, occasionally, red Russian kale. They worked with a well-known cabbage grower in the Pontoise region and by fall of 2012, the vegetable was ready for restaurants.

"His great-grandfather grew cabbage for Napoleon," says Mr. Nahon of Laurent Berrurier. "He knew [kale]… but I think when people go to markets today, they only look for one type of chou [cabbage]."

When Ms. Beddard moved to Paris in 2011, she had a hard time believing that kale was unavailable in a city that bows down to food. Over the past year, she has been working to change this as the founder of The Kale Project, a website committed to raising the profile and availability of the leafy green in France. In September, she hosted an official "kale unveil" at Verjus where Boston native Braden Perkins created a tasting menu that showcased the green, supplied by Mr. Drouard and Mr. Nahon.

Mr. Perkins compares kale to sunchokes, which have a similar association with wartime and poverty. But to young cooks, who have either grown up or worked abroad, they represent fresh, local bounty and a more cosmopolitan interpretation of the Slow Food movement. "The awareness of all the food just becomes like a rabbit hole once you start," he says.

Next month, Marc Grossman who already owns two vegetarian restaurants in Paris, will co-launch the first cold-press juice delivery service in the city. Kale will be featured front and centre.

Over at Jour, since the kale rollout this month, associate manager Thomas Battistini says the restaurant has sold approximately 600 kale salads (compared with 3,000 to 4,000 salads a day – the majority with Batavia lettuce as a base) – a number he describes as "not bad."

"The French have a passion for gastronomy and they're large consumers of fresh produce, so it's funny that Americans have given us this vegetable that existed but has been forgotten."

With a report from Kristina Virro

People in France haven't even settled on a name for kale. Among its many aliases:

chouborecole (a nod to its Dutch heritage)

With a report from Kristina Virro 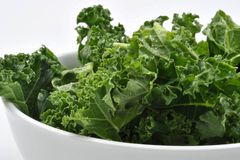