It's been a tough, awe-inspiring and stinky operation – and by the time it's over, the biggest animal to grace the Earth will be packed into travel-sized parts on an unlikely journey across Canada.

Workers expect to complete the transformation of a blue whale from sea-dwelling leviathan to highway cargo on Tuesday, the latest chapter in a tragic and curious tale that has travelled the globe.

The dead whale was one of nine caught in unusually heavy sea ice this spring, and one of two to wash ashore in Newfoundland. Towed by trawler from the community of Trout River to Woody Point, it is being dissected by a team headed by Mark Engstrom, an evolutionary biologist at the Royal Ontario Museum in Toronto.

The task of carving and dismantling a whale carcass is not simple – workers have faced hail, cold, marauding seagulls and a stench described at best as gut-wrenching – but Mr. Engstrom sees the exercise as being all in the service of science.

He is collecting the bones as well as tissue samples to make them available for researchers.

"It is a positive from the tragedy of the death," he said Monday while taking a break from the job. "It's very unfortunate that the whales died, but we're trying to get as much information as we can out of this animal, so that it comes to some good use."

Beheld, the blue whale is an animal of superlatives. It can stretch to 30 metres and weigh up to 180 tonnes. Its tongue is as heavy as an entire elephant, its heart as hefty as a car. On Monday, the team was taking apart the last part of the beast's skeleton – the skull, which is so large it will probably require its own transport truck.

"The animal is absolutely gigantic. I'm awed by the physical size," said Mr. Engstrom, who should know – he more typically studies mice and bats.

On Monday, Mr. Engstrom had also stripped the carcass of a blood vessel.

"I could put my head inside of it," he said over the phone. "And I have a big head."

The fate of the second beached whale remains uncertain. Mr. Engstrom says he is likely to know by Tuesday whether he will have the funds to relocate and dismantle the animal, which is in the town of Rocky Harbour. He said he has come up against "unexpected" costs, including the towing operation from Trout River and the price of burying the whale blubber in a local landfill.

Each specimen is considered a gift to researchers. Only about 250 blue whales remain in the North Atlantic, the remnants of a once-thriving population devastated by whaling. The nine whales killed this year represent about 5 per cent of the entire North Atlantic population, Mr. Engstrom said.

"Blue whales are extremely rare. The population just hasn't been recovering," he said. "I think we really have to be super careful about anything that we introduce into their environment, because we might lose them. We can't assume that they'll be okay."

Ultimately, Mr. Engstrom, deputy director of collections and research at the ROM, would like to see the whale skeleton put on display at the museum. (That possibility remains in the distant future, since it takes years to fully strip the skeleton.)

Transporting the Earth's largest animal across a portion of the world's second-largest country was never going to be easy. Each bone is being loaded by front-end loader into a tractor trailer and wrapped in plastic. The tissue samples, meanwhile, will travel in liquid nitrogen by plane.

But Mr. Engstrom considers the undertaking a fitting reflection of the nation.

"Whales are very iconic for Canada. We have three coasts, and there are whales on each of them," he said. "They're something Canadians can relate to."

Graphic: How to turn a dead whale into a museum display
June 19, 2017
Sperm whale carcass floats away from Newfoundland town
May 12, 2018 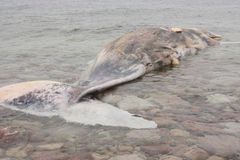 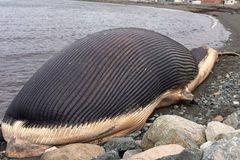 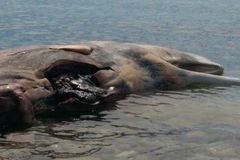 ROM to help in ‘smelly work’ of preserving beached whales
May 12, 2018 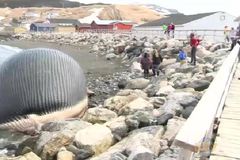 new
Solution in the works to deal with whale carcasses on Newfoundland shore
May 12, 2018 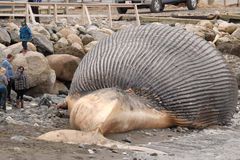 Newfoundlanders fear whale carcass will explode as town seeks help removing it
May 12, 2018