Fundraisers have surpassed their $400,000 goal to help Aymen Derbali, the victim of the Quebec City mosque shooting whose story of courage and survival touched people across Canada and the world over.

Mr. Derbali was struck by seven bullets and nearly died after a gunman opened fire inside the Grand Mosque in January, 2017, killing six men. Mr. Derbali spent two months in a coma. When he woke up, he was paralyzed as a result of bullet fragments lodged in his spinal cord.

DawaNet, a Mississauga-based Muslim community group, launched a fundraising campaign for Mr. Derbali in December, the day after The Globe and Mail reported on his condition. At the time of The Globe's interview at a Quebec City rehabilitation centre, Mr. Derbali voiced the feeling that he had been largely forgotten.

Since then, his story gained worldwide attention. By Friday evening, the fundraiser had collected $411,000, overwhelmingly from Canadians but also from donors in the U.S., Europe and Asia. The funds were aimed at helping Mr. Derbali purchase a home for himself, his wife and their three children that could accommodate his wheelchair.

"I'm very moved, and want to thank all the people who supported me," Mr. Derbali said in an interview from Quebec City on Friday evening. "This convinces me even more that there is more good than evil in the world."

Thanks to the funds, Mr. Derbali was able to make an offer on a new home in Quebec City – a bungalow located about three kilometres from the mosque. His purchase offer happened to be accepted on Friday.

"Aymen's story brought out the best of us," said Amira Elghawaby, a spokeswoman for DawaNet. "He was a ray of light at a very dark moment in Canadian history."

Mr. Derbali was prominent at the recent commemoration ceremonies marking the one-year anniversary of the mosque attack. He was praised for his sacrifice: distracting the shooter in order to spare other worshippers. Mr. Derbali has steadfastly refused to be bitter about his plight and maintained his faith in Quebeckers and the country he chose to settle in after moving from Tunisia in 2001.

"We really saw the nature of Quebec and Canada – their generous natures, their good hearts," Mr. Derbali said at the commemorations. "It has made me very proud to be a Quebecker, a Canadian."

Mr. Derbali says he and his wife, Nedra Zahaoui, had a 15-minute private conversation with Prime Minister Justin Trudeau at the Grand Mosque on Jan. 29th, just before the public anniversary vigil.

Mr. Derbali said he hopes to take possession of his new home in the spring. "With all the support I've received, it gives me strength to go forward."

He told The Canadian Press in January he hopes to live close to the mosque because prayer helps him to recover psychologically. 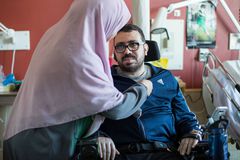