Gaetano Gagliano was driven by his Roman Catholic faith, a strong sense of family and a recognition that humans must communicate effectively. This trinity of inspirations led him to build Canada's largest privately owned communications company, with 1,300 employees, as well as this country's first Catholic television network.

During his lifetime, Mr. Gagliano shared laughs with the Pope, amassed great wealth despite giving 10 per cent of his earnings to the Church, and put Canada on the map with Salt + Light Television, now broadcast around the world. He died at home in Woodbridge, Ont., northwest of Toronto, on April 12, surrounded by his large family. He was 98.

The company he founded, St. Joseph Communications, publishes an array of magazines, including the flagship titles Fashion and Toronto Life (readers may also recognize Quill & Quire) and in latter days branched out to marketing and branding.

"The very name – St. Joseph – indicates devotion," Cardinal Thomas Collins, the Archbishop of Toronto, told The Globe and Mail. "He was a very devout man and he had a great sense of spreading the word." He chose the name because St. Joseph is Canada's patron saint and the patron saint of workers.

Father Thomas Rosica, CEO of Salt + Light, said Mr. Gagliano, whom he described as a father figure, was "an incredible man who defied all the odds." "He had a vision," Father Rosica said. "And it wasn't a crazy vision. It was one grounded in his own experience. He respected tradition but he trusted in the future."

Over two decades, Mr. Gagliano grew the company from a one-man shop to a mid-sized organization. Beginning in the late 1970s, his children began joining the business and expanded it by acquiring large advertising contracts, a photo studio, magazine publishers and printing facilities in every province.

Mr. Gagliano was recalled as an old-school businessman whose handshake was his bond, values anchored in his beloved church.

Gaetano Gagliano was born in the aptly-named Sicilian village of Cattolica Eraclea on Aug. 24, 1917, one of six children of Francesco, a farmer, and his wife, Giuseppina. The lad aspired to the priesthood, and was accepted to two seminaries, one in Alba, in northwest Italy, then one in Rome, but had to quit both because of poor health.

Though he did not complete his training, he encountered the man who would change his life. Rev. Giacomo (James) Alberione was a whirlwind of good works, founding the Society of St. Paul, the Daughters of St. Paul, and other congregations and lay groups within the Pauline family.

Father Alberione introduced Mr. Gagliano to the printing press and its power. The mission of the Paulines was, and remains, to communicate the message of the Catholic Church by modern means, and they had presses that cranked out magazines, brochures and religious books. For three years, Mr. Gagliano worked the printing press for two to three hours a day on top of his seminary studies.

"It was through this priest that he really fell in love with his faith," his son Tony Gagliano said.

For his work promoting the printing of popular editions of the Bible and use of modern periodicals to spread God's word, Mr. Gagliano's mentor would be beatified by Pope John Paul II in 2003.

Because of the education that Mr. Gagliano received at the seminaries, he did not see action during the Second World War. He joined the army but held administrative jobs all over Italy.

At war's end, he returned to farming and held public office as a local councillor. But life was hard.

"Times were really challenging in Italy, and all over Europe," said his son Frank. "I think he just realized farming wasn't for him and he wanted an opportunity. He was told – and everybody talked about – how in Canada, or 'America,' the streets were paved with gold, and he wanted to raise a family there."

In an archetypal tale of migration to the new world, a 38-year-old Mr. Gagliano arrived in Toronto in 1956 to join members of his wife's family, with four kids, a fifth on the way, and $40 in his pocket. He soon joined his brother-in-law laying track for Canadian Pacific 12 hours a day. At night, he ran a small letterpress from his basement. He printed business cards, wedding invitations, programs and the like. The business grew to the point where he quit working at CP. Soon, he was also printing religious books and materials, and he never looked back. Later, he began giving 10 per cent of his earnings to the Church. (His family still tithes.)

Fast forward to 2002. Mr. Gagliano was 85, still working, and had a dream. It was just after World Youth Day had been held in Toronto, and Father Rosica, who had directed the week-long festival that drew an estimated 400,000 Catholic youths from around the world, was summoned to a meeting with the Gagliano family.

"I thought I was being called to a meeting to talk about bills or something we owed," Father Rosica recalled with a smile. "Mr. Gagliano was waving this piece of paper and said, 'we've been watching you. We watched what you did on World Youth Day. It's been my dream to create a Catholic television network. We want you to accept this.'"

Even though a licence from the Canadian Radio-television and Telecommunications Commission had already been secured, Father Rosica declined. He then headed to the Vatican for a follow-up meeting about World Youth Day with Pope John Paul II. At his hotel, Father Rosica found a 12-page fax outlining the Gaglianos' proposal. "I remember thinking, 'These people are pretty insistent,'" Father Rosica recalled.

The matter came up in the meeting with the Pope.

"What have they asked you to do?" the pontiff inquired.

"They want me to start a Catholic TV network in Canada."

"Accept it!" John Paul replied. "You're living in a mission country."

The pontiff may have said that in jest, Father Rosica conceded, "but now that he's a saint, perhaps nothing was in jest."

In any event, Salt + Light Television hit the airwaves on July 1, 2003 with a single feed from the Vatican. Today, it is available to more than 2.5 million viewers across Canada, with dozens of in-house programs and documentaries in English, French, Italian, Mandarin and Cantonese, and is streamed online to audiences worldwide. There's also a magazine and a radio station, all employing a staff of 34 in Toronto and Montreal offices.

Mr. Gagliano and his wife met Pope John Paul in 2004 at the Vatican. By then frail, the pontiff gestured toward the older (by three years) but youthful Mr. Gagliano and quipped, "Chi è questo vecchio?" ("Who is this old man?")

Mr. Gagliano received the Vatican's Order of St. Sylvester in 1992, and was awarded the title of Commendatore, one of Italy's highest honours. His 1997 Order of Canada citation noted his commitment to environmentally sound business practices, including a reforestation partnership his company established with Scouts Canada.

His family was at the centre of his life, and he leaves a good number of them: His wife of 70 years, Giuseppina; 10 children; 35 grandchildren and 16 great-grandchildren.

Tony Gagliano, the unlikely messiah behind Luminato
May 2, 2018 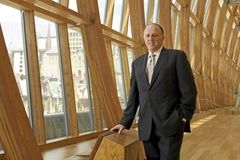