A Canadian brigadier general is contradicting Defence Minister Peter MacKay's assurances that this country's intelligence-sharing relationships with allies remain unscathed in the wake of the Jeffrey Delisle spy affair.

SLt. Delisle, a Canadian naval intelligence officer, has confessed to spying for Russia over 4 ½ years in exchange for nearly $72,000 and a court is now trying to determine his appropriate sentence in this extraordinary case.

On January 17, 2012, after the sailor was arrested, Mr. MacKay played down the impact of the betrayal, saying allies retain "full confidence in Canada."

Brig.-Gen. Williams, who served in Afghanistan, said the military has assessed the consequences of SLt. Delisle's betrayal as "exceptionally grave damage to the national interest of Canada."

He sounded a much more uncertain note Wednesday on whether the spying has injured relations with allies.

He said a December 2012 follow up assessment found things may be worse than was first thought in a February 2012 "My conclusion at that point in the December assessment was that the damage is potentially far greater than we assessed in February at the early stages of our investigation."

He acknowledged that allies haven't outright informed Canada it will be cut off from information sharing but said it's hard to tell what the impact on the relationship may be.

Brig.-Gen Williams was a witness called by the Crown at a two-day sentencing hearing for SLt. Delisle in a case that has embarrassed the Canadian government and hurt its standing with partner foreign governments.

The debate between the Crown prosecutor and the defence at this hearing turns on the question of how much damage was done to Canada and its allies.

Challenged by Mike Taylor, the defence lawyer for Mr. Delisle, the general noted the defence minister's statement of assurance came early in the investigation before the military had more time to assess things.

"I am aware that Minister MacKay commented in early January in the early stages of our investigation where we didn't know – and I don't imagine either could he have known– the extent of the damage," Brig.-Gen Williams said.

Asked if he was saying the Defence Minister was wrong, the general avoided the question but said Mr. MacKay would not have had more information than Forces intelligence experts at the time.

"I can't speak for Mr. MacKay, sir, but I know what little we knew at that time when he made the statement in January, he wouldn't have known more than us on the particular damages," the general said.

Brig.-Gen. Williams said it's hard to discern if allies are reducing the volume of sharing.

"The information we receive from the Five Eyes community is not a finite number of documents," the general said. He said there's a potential that Canada could end up "receiving less" in some areas, he said. "We just don't know."

He said Mr. MacKay was further briefed on the damage from the Delisle affair in June 2012.

The 41-year-old SLt. Delisle has already admitted to two charges of "communicating with a foreign entity" under the act.

The maximum sentence for someone convicted of these offences is life in prison.

The Five Eyes community has boosted technical and security standards in the wake of the Delisle affair, Brig.-Gen. Williams said, and Canada has to meet these or lose access.

"Lack of compliance will result in termination of access to these top secret products," he said.

Mr. Taylor suggested the military is assuming "the worst" but can't prove exactly what SLt. Delisle passed to Russia.

Brig.-Gen. Williams said the espionage could harm "our ability to continue to get" top-secret documents from allies.

He said it could take some time to determine the full extent of the damage the naval officer's spying has wrought.

Mr. Taylor challenged the general's contention that Canada is suffering.

A senior official at Canada's spy agency told a Halifax court she believes SLt. Delisle sold the Russian government information that could expose the identity of people who furnish Ottawa with intelligence data.

Michelle Tessier, director general of internal security at the Canadian Security Intelligence Service, also said the naval officer's 4 ½-years of spying have put Ottawa at serious risk of being cut off from intelligence shared by close allies.

SLt. Delisle, who told his interrogators he offered his services to Russia out of mad grief over his wife's infidelity, will be the first person sentenced under the Security of Information Act passed in response to the Sept. 11 terrorist attacks.

The Canadian government does not know precisely what SLt. Delisle gave to Russia between 2007 and 2011 although it managed to intercept the last batch of documents he tried to turn over to Moscow in early 2012.

Ms. Tessier said CSIS considers the damage caused by the naval officer's treachery as "high," meaning "exceptionally grave damage" that could include exposing the identity of a human source, leading to potential loss of life and harm to relations with allies.

Ms. Tessier said the final transmission attempt by SLt. Delisle contained two CSIS reports, one of which was raw intelligence that was not even supposed to be shared with Canada's allies. One report was classified Secret and one was rated as Secret: Canadian Eyes Only.

She said CSIS considers the reports representative of the type of material SLt. Delisle had access to over the period 2007-2012.

"They contained information that would allow a knowledgeable reader to potentially identify a human source," she told the court.

This would allow the Russians to target people for espionage or recruitment.

"They are tactical pieces of intelligence … somebody receiving that type of information over a period of time would certainly be well placed to start identifying potential human sources."

The reports also included the name, title and phone number of CSIS employees. There's even a paragraph in CSIS reports that describe the access possessed by CSIS's human sources, the spy agency official said.

While the reports in question were intercepted and not received by the Russians, Ms. Tessier argued they are representative of the damage done to CSIS.

"CSIS is a human intelligence agency. We recruit human sources for information."

Canada, being a small country with only one intelligence service is highly dependent on its foreign partners such as the U.S., U.K., Australia and New Zealand for confidential information.

"We remain a net importer of intelligence," Ms. Tessier said.

"It's all about trust. It's about confidence. An intelligence service cannot operate without that cooperation.

She said allies could be scared off sharing with Canada as a result.

Ms. Tessier said the Five Eyes network of intelligence sharing between the United States, United Kingdom, Canada, Australia and New Zealand has recently introduced stricter rules for safeguarding the information they circulate among themselves.

"There are deadlines to meet in that regard and [if they are not met] there is a risk we could be cut off from certain intelligence."

Mike Taylor, SLt. Delisle's lawyer, challenged Ms. Tessier's characterization of what his client gave to the Russians. "You cannot say that any human sources were identified. You don't fully know what he provided … this is your best guess."

Nova Scotia's Chief Judge of the Provincial Court, Patrick Curran, is expected to consider sentencing arguments for a couple of weeks before rendering a decision SLt. Delisle, who's been held in custody for the last year, retains his rank and pay at least until he's sentenced.

SLt. Delisle's lawyer has previously argued the information his client leaked "in no way at any point jeopardized the lives or safety of any of the men or women operating with the Canadian Armed Forces."

The prosecutor at bail hearings in the spring of 2012 cited intelligence sources who feared SLt.'s espionage could push Canada's relations with allied intelligence "back to the Stone Age."

The sailor, whose last post was the ultra-secure Trinity naval intelligence gathering centre in Halifax, had access to top military secrets – databases with protected information from Canada and the country's allies through intelligence-sharing systems such as the "Five Eyes" network linking Australia, Canada, New Zealand, Britain and the United States.

SLt. Delisle, the court was told last year, searched military databases for the term "Russia," smuggled the details out of his office using a USB memory stick – and handed the fruits of his labours over to agents for Moscow every 30 days.

The information was mostly military but also contained reports on organized crime, political players and senior defence officials. It included e-mails, phone numbers and a contact list for members of the intelligence community. 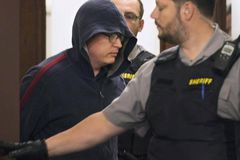 Naval spy to be first Canadian punished under Security of Information Act
January 29, 2013 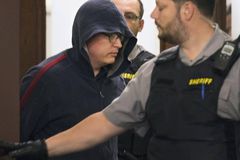 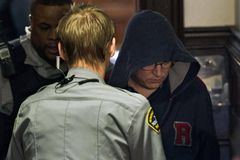