The Globe and Mail leads all entrants with 19 nominations for the 67th National Newspaper Awards.

A short list announced on Friday includes finalists from 23 news organizations. Montreal's La Presse has the second most nominations with seven, followed by the Toronto Star with six, the Winnipeg Free Press with five and the Ottawa Citizen with four.

Among The Globe's finalists are Mark MacKinnon and Grant Robertson, who are both five-time NNA winners and nine-time nominees.

Two of the three nominees for Project of the Year – The Globe and the Star – are being recognized for reporting on missing and murdered indigenous women and girls, while the other nominee, also from the Star, is for work on human sex trafficking.

"We have a solemn responsibility to do the best journalism possible," said The Globe's editor-in-chief, David Walmsley. "The breadth of subjects nominated shows the bench strength of The Globe and Mail is today unparalleled. I am very proud of the team and their families for their relentless commitment."

A total of 66 finalists were chosen in 21 categories from 1,100 entries, and the winners will be announced on May 27 at a ceremony held in Edmonton.

ARTS AND ENTERTAINMENT: A team of reporters – Greg McArthur, Kate Taylor and Jacquie McNish – were tapped for their investigation into the Royal Ontario Museum's difficulties collecting on donations, while senior media writer Simon Houpt is in the running for coverage of CBC Radio program Q, English-language Canadian films and Canadian television.

BEAT REPORTING: Ivan Semeniuk earned a nod for his coverage of science, and Kathryn Blaze Baum is a finalist for her reporting on indigenous communities.

BREAKING NEWS: The Globe is nominated for its coverage of the attack on Charlie Hebdo, which killed 11 people and wounded 11 others.

INTERNATIONAL: Foreign correspondent Mark MacKinnon is being recognized for his coverage of two different deadly terrorist attacks in Paris, while Joanna Slater is nominated for giving readers an up-close look at the refugee crisis in Europe.

INVESTIGATIONS: It took many months and more than two dozen federal Access to Information requests for reporter Renata D'Aliesio to reveal that at least 62 military members and veterans have killed themselves after serving in the war in Afghanistan, earning her a spot as a finalist.

LONG FEATURE: A deeply personal story on healthy attitudes to sex and love in an age of online pornography earned Sierra Skye Gemma a nomination, while a similarly revealing story by Alexandra Kimball about the fallout from her miscarriage is also up for an award.

NEWS PHOTO: During a major protest against ride-sharing company Uber in Toronto, photographer Mark Blinch captured the moment when a taxi driver hung onto a moving car to earn his nomination.

POLITICS: Ontario politics beat reporter Adrian Morrow is in the hunt for revealing secret payments from the province's Liberal government to the Ontario Secondary School Teachers' Federation in an apparent bid to secure labour peace.

PRESENTATION: Bryan Gee and Benjamin MacDonald are nominated together for their Globe Style portfolio.

PROJECT OF THE YEAR: A team of Globe and Mail journalists are nominated for wide-ranging coverage of Canada's missing and murdered indigenous women and girls, including a series exploring women targeted by serial killers.

SPORTS: Grant Robertson's three-part series on how a minor-league professional baseball squad in Quebec has opened a promising diplomatic channel to Cuba, mixing sports and politics, is a finalist.

A full list of nominees can be found here. 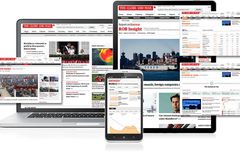 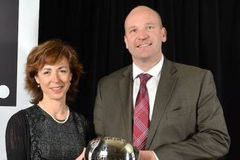 The Globe wins the most Canadian Online Publishing Awards
November 19, 2015