An automobile backed its wheels into the waters off Halifax. The two men aboard scooped up a flaskful of Atlantic water. And with the yell "All on board for Vancouver!" they were away.

It was Aug. 27, 1912, and Thomas Wilby and Jack Haney were setting out to become the first motorists to cross Canada – quite a feat, considering that there were only 16 kilometres of paved road in the entire country.

There were certainly signs that the car was the future. Most everywhere had stopped banning them, registration was climbing quickly and the newly formed Canadian Highway Association was already calling for a trans-Canada highway. Canadians would soon have the second-highest rate of car ownership in the world.

Thomas Wilby was a middling, middle-aged British travel writer who talked the Reo Motor Car Company of Canada into sponsoring his journey and supplying him with a car and driver. His eventual book about the journey, A Motor Tour Through Canada, would be a celebration of both the Canada he travelled and the one that he anticipated the car would create.

Although Mr. Wilby noted that "on the Canadian road, the car is not yet a welcome dictator," he predicted that it would soon open up the country, free farmers from isolation and bring cosmopolitan life to sleepy small towns. And the highway grid that the car required would bond provinces and regions together in a way that the straight line of the railway could never do.

Many of his prophecies would come true, although Mr. Wilby's unremittingly chipper book concealed the fact that he clashed all the way with his travelling companion, Mr. Haney, one of the Reo Company's young mechanics and (to Mr. Wilby's chagrin) a recently immigrated American.

In A Motor Tour Through Canada, Mr. Wilby seldom mentions the driver, and never by name. In the sole photo in the book in which Mr. Haney should have appeared, he was airbrushed, Soviet-style, out of the picture.

For his part, Jack Haney wrote a travel diary so bleak as to be almost comical, painting Mr. Wilby as a landlocked William Bligh, with ominous comments such as "Captain is getting worse." Mr. Haney was incensed that Mr. Wilby refused to lend a hand the dozens of times a tire had to be repaired or the hundreds of times the car had to be pushed out of mud.

Fifty-two days after leaving Halifax, the two arrived in Alberni, B.C., having survived Northern Ontario swamps, nighttime driving on rail ties in B.C. and each other. They had not strictly crossed all of Canada by car – a fact not disclosed until deep into Mr. Wilby's book – because when roads were non-existent, they loaded the Reo onto trains and ferries, including the entire 1,500 kilometres from Sault Ste. Marie to Winnipeg.

Nevertheless, they had made a journey into Canada's future. As Mr. Wilby wrote, "Where one automobile has travelled, a hundred will be ready to follow, and a thousand eager to travel a four-thousand-mile Highway through a panorama, unique, varied, rugged and consistently sublime."

And, with luck, most of them would have more compatible company.

Drive on the wild side

Having banned cars outright in the first decade of the 1900s, the National Parks Branch had a change of heart by the teens. As the car became associated with mobility, freedom and democracy, the Department of Interior high-mindedly commissioned from a civil servant-cum-poet the (now deservedly obscure) Choric Ode on the Opening of the Banff-Windermere Highway in 1923. What early drivers might not have anticipated was how cars would shape not only the way people got to natural destinations but what nature they would see, and how. In 1936, for example, Cape Breton Highlands National Park was established fundamentally as a scenic drive.

From sea to sea

When Mr. Wilby and Mr. Haney came to the end of their cross-Canada drive in 1912, they found the (now-merged) B.C. communities of Alberni and Port Alberni arguing as to where the proposed national highway should start. The two towns were stealing the "Canadian Highway" marker from one another at night, until finally the Alberni townspeople tied a bull terrier to it.

For want of a unified national vision, the dream of a coast-to-coast highway lagged for more than half a century, even after prime minister R.B. Bennett called for one during the Depression and all federal parties came out in favour in the late 1940s. Though officially opened in Revelstoke, B.C., in 1962, the Trans-Canada Highway was not actually completed until 1970. At the time, it was the longest national highway in the world, running a fifth of the way around the globe at that latitude. Sensibly, it steers well clear of Port Alberni.

The birth of sprawl

As geographer Richard Harris notes, there was a suburban boom early in the 20th century on much the same scale as the one after the Second World War – but thanks to the car, the later one took up much more space. Car ownership had reached about one million by 1945, but in the first seven postwar years it doubled, and within a decade doubled again.

The auto became a practical necessity, with the extension of public transit lagging so far behind suburban growth. One result was that married women in one-car families were stranded in the suburbs, participating in the labour force much less than married urban women were.

The call of the mall

With suburbanization came strip malls, designed for quick dashes from car to store. For a time in the late 1950s, malls such as the Don Mills Centre in Toronto and the Rockland Centre in Montreal championed a model with open-air pedestrian streets. But closed shopping malls – such as the West Edmonton Mall, the largest in North America – came to dominate. The last quarter-century has seen the rise of big-box stores, often in clusters sharing mammoth parking lots. These "power centres" are open-air malls in their own way, except that walking between stores would be impractical – and even life-threatening.

The tenfold increase in the price of oil in the early 1970s shook many Canadians' faith in fossil fuels. For a while, there was considerable interest in the possibilities of alternative energy such as solar and wind. But there was no real alternative to the gas-powered car. With the help of manufacturers of smaller cars from Asia (and eventually North America), consumers chose conservation over change. For a time, it led to a lot of savings on fossil fuel, until higher rates of vehicle ownership and the popularity of heavier SUVs, minivans and light trucks brought per-capita gas consumption back up to and beyond 1973-74 levels.

Alan MacEachern teaches history at the University of Western Ontario. 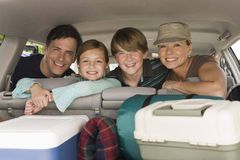 Windows down, radio up: Your best songs for a summer roadtrip
June 19, 2017
You said it: Your Canadian moments
June 19, 2017
Follow us on Twitter @globeandmail Opens in a new window
Report an error Editorial code of conduct
Due to technical reasons, we have temporarily removed commenting from our articles. We hope to have this fixed soon. Thank you for your patience. If you are looking to give feedback on our new site, please send it along to feedback@globeandmail.com. If you want to write a letter to the editor, please forward to letters@globeandmail.com.
Comments