The flooded shafts of a long-abandoned coal mine in Inverness, Cape Breton, now form the hazards and greens of a unique golf course that is restoring hope to a down-at-the-heels community.

In this town of 2,000 on the western shores of the island, disappointment has been a way of life for decades, with unemployment hovering around 12 per cent and most of the work seasonal. The recent census painted a grim picture of low population growth, with young people fleeing to find jobs elsewhere.

But there's an energy in town these days as Cabot Links, billed as the first true links golf course in the country, will have its grand opening at the end of June, bringing with it 125 new jobs and, most importantly, promise.

(Despite its name, Highland Links, on the eastern side of the island, is not a true links course.)

The course, a reality thanks to a chance meeting in Toronto between a local MLA and a golf-tourism operator, hangs on the cliffs above a sandy beach, hugging the coast of the Gulf of St. Lawrence. In true links style, native grasses cover knobs of sandy soil, there are ocean views from every hole, and carts are not allowed. And as with other links courses in Ireland and Scotland, this one is nestled between the ocean and the town – just below the main street of Inverness, where the weather-beaten company houses of long-ago miners still stand.

Most small talk among residents used to centre around the weather, but "everybody talks about the weather and the golf course now," said Inverness County Warden Duart MacAulay.

The hope is that a boutique course in a remote, picturesque location will attract golfers from all over the world. Cabot Links is one of only a handful of courses due to open this year in North America; construction has been on a steady decline since a peak in 2000, and more courses are closing than opening in the United States. Locals hope Cabot Links will do what other government job-creation strategies and stimulus plans have not.

At this point, any employment opportunity, Mr. MacAulay said, "is welcomed with open arms."

The list of economic setbacks for the region is long: 270 forestry and mill workers lost their jobs when the NewPage pulp mill closed last September; another 150 lost jobs when a gypsum mine shut down. The lobster season is about to start, but that too can be hit or miss. "There is uncertainty all the time," Mr. MacAulay said. As Inverness braces for more grief from the fallout of this week's federal budget – more cuts to the Atlantic Canada Opportunities Agency, the regional development arm, and to the Department of Fisheries and Oceans – the new golf course cushions the blow.

Katie MacLeod is proof of its potential. Like her friends, she had left to live and work in a camp outside Fort McMurray, Alta., where jobs created by the oil sands are a magnet for Easterners. "That's where everyone goes," she said. "I don't think anybody really loves it … a lot of people go out there to pay off their student loans." At 23, armed with a business degree from St. Francis Xavier University, she has now moved back home and is director of food and beverage at Cabot Links – a full-time salaried job with benefits.

In addition to the spinoffs from more salaried work, the golf course is helping to accelerate municipal improvements such as upgrades to the beach and connecting the boardwalk to the main street. Still, some locals are skeptical about whether Cabot Links will really be an ace in the hole. There's a lot of Missouri in Cape Breton, says long-time Liberal MP Rodger Cuzner, who represents the town. "It's a 'show-me' kind of community," he said. And there are a few naysayers – residents concerned that the course would compromise access to the beach, and complaints that housing prices have increased.

A lot of locals didn't think Cabot Links would ever be built after many false starts.

In the late 1980s, a few citizens began to try to rejuvenate the town, and the Inverness Development Association was born. From it came the idea of turning the land the town owned along the ocean into a links golf course.

The IDA convinced the provincial Conservative government to spend $3-million to bring in grass and topsoil and remediate the 195-acre site. But "it seemed like every time we were getting close the government would get defeated and we'd have to start all over again," recalled Rankin MacDonald, publisher of the local newspaper, The Oran.

He recalls dancing in the street when federal cabinet minister David Dingwall, the Liberal MP for Cape Breton–East Richmond, pledged $10-million to build the course. But Mr. Dingwall was defeated in the next election. They danced again when three American investors were poised to develop the course and Jack Nicklaus was to design it. Then came 9/11. "They were so devastated, they just wanted to invest in their own country," Mr. MacDonald said.

It was a chance meeting in Toronto between Rodney MacDonald, then-MLA for Inverness, and Toronto golf tourism operator Ben Cowan-Dewar that breathed new life into the project. Mr. Cowan-Dewar, who at eight years of age built his first golf hole on his family's Ontario farm, was captivated by the politician's description of the land. He went to see it in December, 2004, saw past the huge municipal recycling plant on the site and was hooked.

He brought in Chicago multimillionaire Mike Keiser, owner of the hugely successful Bandon Dunes resort in Oregon, as his partner, and by March, 2008, was living in Inverness with his wife, Allie Barclay. Renowned golf architect Rod Whitman followed, spending his days walking the course, learning its curves, piecing together 18 holes as one would put together a puzzle.

Mr. Cowan-Dewar will not say exactly how much has been invested, allowing only that it's "tens of millions of dollars." There is a $2.5-million loan from the Cape Breton Growth Fund, which was administered by the ACOA.

He is now in the final stretch – overhead wires are being buried, and 48 chalets, all with ocean views, are being finished. He has vowed that if 15,000 rounds of golf are played this year, he will open a second course on more land along the ocean, calling it Cabot Cliffs. There is even talk about an airstrip to bring in more golfers.

"I have no doubt in my mind that they are going to do it," Mr. MacAulay said. "Ben is probably one of the better things that has happened in Inverness." 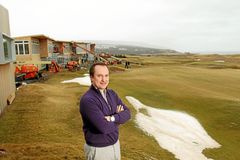