A crestfallen Calgary businesswoman admitted Wednesday that clothing, bedding and toys she had gathered for wildfire victims ended up in a city landfill.

Melissa Gunning said her eco-friendly baby container business, Wean Green, started collecting items after a friend lost her home in May to the raging wildfire that destroyed a good portion of Slave Lake, Alta.

She said the public's response was overwhelming. She sent two semi-trailer loads of donated goods to Slave Lake, but when the community indicated it didn't need any more items, she was stuck with two large storage lockers full of donations.

She called a junk hauler to clear out the units and was assured that the material would be sorted, with anything usable donated to local charities. On Monday, about three-quarters of the items had been given away. The rest, however, ended up in the dump.

"We were overwhelmed. I hate that fingers are being pointed at anybody because this was a crisis. We all just wanted to help. Nobody wanted to see it end this way," Ms. Gunning said Wednesday in an interview with The Canadian Press.

"The landfill is awful and I hate that. One of the things I am really upset about is we did good. It sucks that this bad thing happened, but we did really help a lot of people."

Paul Nielsen, owner of DumpRunner Waste Systems, spotted the donations, clearly marked for Slave Lake, in the landfill. There appeared to be a truckload worth of boxes – video games, children's clothing still on the store hangers, a crib, coats and new blankets.

"This just shook me to the core because it wasn't Uncle Bob's golf pants from the 1970," Mr. Nielsen said. "These were random acts of kindness all packaged up and it was just thrown in the landfill. Something went horribly wrong with this distribution."

He contacted a supervisor at the Spyhill Landfill in hopes that something could be done. However, the supervisor, citing the dump's no-scavenging policy, had the donations buried.

"I think basic human decency, common sense, took a back seat to procedure. Procedure was followed to the letter – bury the load instead of somebody standing up and saying, 'Wait, stop, something's wrong here,' " he said.

City of Calgary spokesman Blair Riddle said that once a load is dumped in the landfill, removing items is prohibited.

"The bylaw is pretty clear," he said. "His hands were tied, really. There was nothing he could do."

Many of the boxes in the dump came from a month-long donation drive at the Calgary office of Total E&P Canada Ltd. The company intended to send to the goods to the Red Cross, but the agency was only accepting cash. Ms. Gunning's business, Wean Green, was suggested.

"We sent it over there," Total spokeswoman Saphina Benimadhu said. "Over all, it's very disheartening. It was important for our employees to contribute to the community into Slave Lake."

Slave Lake Mayor Karina Pillay-Kinee said her community has received a remarkable amount of assistance and goodwill from across the country. There are trailers full of unsorted goods throughout the area, which is why the community asked for an end to donations.

"Frankly, we have so many clothes we could probably clothe our whole community tenfold," she said, adding she can understand why people would be upset at their donations ending up in a landfill.

"People are wanting to contribute and help and it's a bit unsettling that someone's contribution is being thrown out." 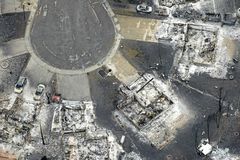 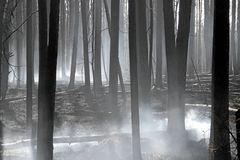 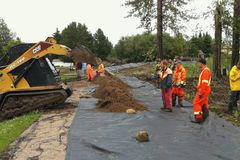