As key players in the drugstore industry position themselves to expand into medical marijuana sales, the drug's forthcoming legalization in Canada is setting up a battle for who might control the market – with hundreds of millions of dollars at stake.

London Drugs Ltd., one of the biggest drugstore chains in Western Canada, said Wednesday it is preparing educational tools for its pharmacists so they will be ready if the company gets the nod to sell medical marijuana to clients. That revelation came a day after The Globe and Mail reported that Shoppers Drug Mart Corp., Canada's largest pharmacy, is also eyeing the market, holding meetings with several of Canada's 29 licensed marijuana producers about supplying its stores.

For now, the drugstores are only looking at the tightly controlled medical marijuana market and would need a federal licence to proceed. But the moves come as Ottawa is taking steps to legalize the drug for recreational use. The mere entrance of the big pharmacies into the business is a threat to retailers who covet the recreational pot business, since the medical business could serve as a springboard into the eventual recreational market.

That much was evident on Wednesday when Ontario Premier Kathleen Wynne attempted to draw a line between the aspirations of Shoppers Drug Mart and London Drugs, and her own contention that retailers such as Ontario's provincially owned LCBO liquor stores should be the vendors of recreational marijuana. Ms. Wynne said she has no problem with private drugstores selling medicinal products – but recreational weed should be the preserve of the government.

"I want to separate the two subjects, because there's a discussion around medicine and medication. In the discussion around medical marijuana, I understand Shoppers Drug Mart is having that conversation and that's their prerogative," she said. "In terms of recreational marijuana, I've been clear that there needs to be control around that and I have made suggestions in the past about the LCBO."

The LCBO currently has a highly lucrative monopoly on the retailing of hard liquor in Ontario, and it also sells wine and beer – returning a dividend of $1.8-billion to the province in 2014. Cash-strapped Ontario could sorely use the extra revenue that would come from retailing marijuana.

"There are big bucks involved here for sure," said Concordia University economics professor James McIntosh, who has studied various approaches to legal marijuana around the world and has provided his report to the federal government. "If it is illegal, marijuana cannot be regulated and profits from these activities cannot be taxed," Prof. McIntosh said.

His report suggests Uruguay as "a possible Canadian model." Uruguay made it legal to produce and sell marijuana commercially in 2013, and the drug is sold in pharmacies, which are "used to dispensing controlled substances."

It is too early to know how the retail landscape will look. There are indications the drugstores are more interested in selling marijuana in oil form rather than as a product that is smoked.

Meanwhile, a Federal Court ruling on Wednesday said Canadians with the appropriate licences can grow their own medical marijuana. The long-awaited decision, sought by patients who argued they should have the right to continue producing their own supply, could affect the sales of recreational and medical marijuana in the long run.

Liberal MP Bill Blair, who is the main federal spokesman on plans to legalize marijuana, said it has not been decided whether the drug should be sold in liquor stores, pharmacies or some of the many dispensaries that have sprouted up across Canada.

Mr. Blair said the government will launch a federal-provincial task force in the coming weeks that will design strict regulations to control the production and distribution of the drug for recreational purposes. He said the task force will consult widely with all players in the industry, with the goal of promoting public health and safety.

While he refused to speculate on the outcome of the process, the former Toronto police chief made it clear he feels that dispensaries currently fail to provide safe marijuana to their clients. "There is no way to know the quality, the purity, the risks of what you're ingesting. I think we can do better," Mr. Blair told a hearing organized by the Senate Liberal caucus in Ottawa.

In British Columbia, Premier Christy Clark said proposals from drugstores to sell medical marijuana, and from liquor stores to sell recreational pot, are "interesting ideas," but she is waiting for federal direction on the Criminal Code before B.C. will shape its response. She called on Ottawa to move quickly because of the uncertainty around the law. "There are so many operators in grey areas, we have got to address that," Ms. Clark said in Victoria.

London Drugs' vice-president of pharmacy John Tse said it makes perfect sense to sell medical marijuana through drugstores, since the product has pharmacological effects and can potentially interact with other medications. Pharmacies are already tightly regulated, he said, and are ubiquitous across the country, ensuring that most people who need the drug will be able to get access to it.

The 78-store chain is already "gathering expert guidance to prepare training and education for our pharmacists," Mr. Tse said. "We want to be in a position where we understand it, we know it, and we can provide proper guidance, counselling, education and product for the patient to use it appropriately."

Other drug chains were far more reticent to talk about the issue. A spokeswoman for the 550-store Pharmasave drugs chain said that "this is a very new topic and not something we want to speculate on." Sobeys Inc. and Metro Inc., which operate pharmacies within their grocery stores, declined to comment on any plans for medical marijuana distribution.

To sell medical marijuana, drugstores would need to secure a distribution licence from Health Canada, which only permits online sales under current rules. Storefront sales will be contemplated by the federal task force tackling the legalization process.

"There are no regulations that permit the distribution of marijuana through retail storefronts, including pharmacies. Shipping by secure mail directly to registered clients is the method of distribution permitted under the [current rules]," a spokesman for Health Canada said. 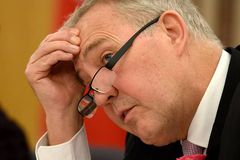 Follow Adrian Morrow, Daniel Leblanc and Richard Blackwell, Justine Hunter on Twitter @adrianmorrow @danlebla @blackwellglobe @justine_hunter
Report an error Editorial code of conduct
Due to technical reasons, we have temporarily removed commenting from our articles. We hope to have this fixed soon. Thank you for your patience. If you are looking to give feedback on our new site, please send it along to feedback@globeandmail.com. If you want to write a letter to the editor, please forward to letters@globeandmail.com.
Comments