A teenaged Sheila North Wilson was waiting for her bus one night in Winnipeg when a man started bothering her, first trying to lure her to his home with the promise of food, then drugs and alcohol.

"You're going to get cold," he told her. "Someone is going to hurt you."

Frightened, she ran away from him, and it was just then that a car pulled up. The driver rolled down his window and asked if the man was bothering her. She jumped in the car and felt relief. But as the car sped down Portage Avenue, it dawned on Ms. North Wilson that, in her haste, she had traded one dangerous situation for another.

The driver turned to her and said, "Don't be alarmed. I'm from Alberta and you're in a stolen car." She contemplated rolling out of the moving vehicle, but instead asked the man to take her to the home where she was billeting. After they pulled up and she refused to let him stay overnight, he told her: "Well, then, I'm going to need something for the ride." He unbuckled his seat belt and planted a kiss on her. Ms. North Wilson fled the car, shaken.

It was not until she became a journalist reporting on violence against indigenous women that she realized she could have been one of those missing or murdered. As a child, she was raped by what she described as a "serial" predator in her northern Manitoba community. As a teen, she found herself inside a drug house run by a gang. Later, she ended up in an abusive relationship.

Today, she is Grand Chief Sheila North Wilson, elected in September to lead Manitoba Keewatinowi Okimakanak, a political advocacy organization representing more than 30 northern First Nations, including Oxford House, where she grew up before she moved to the prairie capital in pursuit of a better education.

"I always think: 'By the grace of God, I'm still here,'" she said in a recent interview at the MKO offices in Winnipeg. "I feel like I'm a survivor. I feel obligated, in a way, to work on these matters and issues and do what I can to shed light on it."

It was Ms. North Wilson who, in 2012 while working at the Assembly of Manitoba Chiefs, coined the social-media hashtag #MMIW – for missing and murdered indigenous women. The choice of "I" was deliberate, she said. Her people are indigenous to Canada; she does not connect with the term "aboriginal." She went with "W" for women, but looking back, she wonders if it should have been an "F" for females, given how many girls have been victimized, or even a "P" for peoples. Indigenous men, after all, are even more likely to be killed or go missing than indigenous women.

Still, Ms. North Wilson stands by the movement to tackle violence against indigenous women specifically. It was women, she said, who first started holding the vigils, the marches, the protests. Her culture, she said, is matriarchal, so taking care of the women inevitably means taking care of families and communities. "When I say missing and murdered indigenous women," she explained, "I feel like it represents the whole issue."

The Liberal government recently launched the first phase of a national inquiry into violence against indigenous women, and has begun consulting with victims' families and national aboriginal organizations on the probe's scope, duration and mandate. Inevitably, Ms. North Wilson said, an inquiry will benefit all indigenous people.

Nobody would dare say that now, she said, adding that some of the strongest voices on the issue are those of men.

Ms. North Wilson has emerged as an indigenous leader, but a couple of decades ago, she was a regular teenager trying to make a go of life in the city after moving from her reserve. Her upbringing had been full of love, she said, and she had performed well at school – a star student with impeccable attendance.

But after moving to Winnipeg to attend Daniel McIntyre Collegiate Institute, she struggled. She did not know how to write an essay. She knew nothing of algebra. "When you're growing up on a reserve, you're always at least two grades behind," she said, referring to the poor quality of on-reserve education in some communities.

Nervous and feeling out place, Ms. North Wilson latched on to the one young woman who seemed interested in befriending her. The young woman was dating a man 20 years her senior who would pick her up at lunch and during breaks in his Trans Am.

In time, Ms. North Wilson joined the couple for outings to a West End home, which turned out to be a drug house. She was surprised to see blankets over the windows and "mattresses everywhere." Several people, it turned out, shared the car. It was a ruse, she said, to lend the group an air of glamour so they could lure girls like her.

Not wanting to seem "square," Ms. North Wilson said she returned to the home on occasion, but one time she heard her mother's voice in her head urging her to leave. She left, and it was soon after that the police raided the West End home. She could well have been arrested, she said – the start of what could have been a very different life.

Ms. North Wilson asked to redo some of her courses and managed to improve her grades, but between Grade 10 and Grade 11, she met a man who "basically took over" her life. It was a "domestic violence situation," she said. She got pregnant, married the man and had a son. She never made it to her high-school graduation, although she did later pass an equivalency test to earn her diploma.

She went on to graduate from Red River College with a degree in creative communications and became a journalist. In her reporting, she met girls and young women who had spent time in the sort of drug house she had fled years earlier. "They told me they were passed around like property: 'Okay, your turn to have this one. I'm going to have that one now,'" she said.

Ms. North Wilson, a 43-year-old mother of two who divorced in the late 1990s, said she has been victimized equally over the years by indigenous and non-indigenous men. Asked about The Globe and Mail's recent investigation that found at least 18 indigenous women were slain by serial killers since 1980 – and that most of the women were killed in or near cities by non-indigenous men – she said "people should take stock of that" and be aware.

She also said she is not oblivious to the reality that there is "much work to be done" within the community; indigenous people, she said, must be willing to look inward to find solutions.

Ms. North Wilson hopes the national inquiry will bring insights, not only about the victims, but about the perpetrators and, importantly, about how it is that Canada got itself into this tragic situation.

The Taken: Five women, five serial killers and how their paths came to meet
June 19, 2017
OPP says 180 indigenous people have been homicide victims in recent decades
May 16, 2018 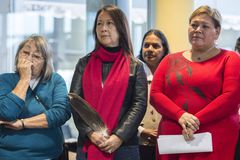 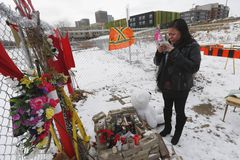