Goodwill Toronto will give its employees their back wages after all, announcing it has secured financing to meet its payroll costs after saying it could not do so on their normal Friday payday.

Keiko Nakamura, the chief executive officer of Goodwill Industries of Toronto, Eastern, Central and Northern Ontario, announced Friday that the organization's employees would have their pay in their bank accounts by the end of the day for all hours worked up to Jan. 16, the day before the organization abruptly closed its doors. She also said records of employment, which workers need to apply for Employment Insurance, will be mailed next week.

Goodwill's scheduled payday is Friday, but the organization announced Wednesday that it would not be able to provide the cheques and said at the time that it hoped to announce more by Monday.

Goodwill was initially told its bank, Royal Bank of Canada, required three days to convert its short-term investments into cash to pay wages, Ms. Nakamura said in an e-mail Friday. But it learned Thursday the process could be sped up to allow wages to be paid by Friday.

"We were notified yesterday that our balance was sufficient to cover the upcoming pay period," she said. "The bank agreed to provide a short-term loan. Subsequently, we worked with [payroll processor] ADP to process the funds for Friday."

The Canadian Airport Workers Union, which represents employees at Goodwill, had urged U.S.-based Goodwill Industries International Inc. to step up and help the Toronto operation pay back wages, union lawyer Denis Ellickson said. Mr. Ellickson said the union estimated the unpaid wage bill at between $500,000 and $750,000.

A representative of Goodwill International has been in Toronto this week to look into the situation, but Ms. Nakamura's statement did not explain whether the international body had assisted with paying the wages.

Mr. Ellickson said Friday he did not know what had happened, but said it was good news.

"It's just a great sense of relief," he said. "Obviously there's lots more work to be done in getting the stores open and people back to work, but this is a very positive sign in a week that's been very tumultuous."

Goodwill employees arrived at work Sunday to learn that the organization had closed its 16 stores and 10 donation centres, as well as two offices, leaving 430 workers in limbo with no explanation of whether they were being laid off or whether the stores were going to reopen.

Ms. Nakamura said she regretted "the concern, anxiety and frustration" that employees had endured "as a result of Goodwill's cash-flow crisis."

Her Friday statement did not reveal whether the stores will ultimately reopen, noting "the future of Goodwill is not assured." She offered vague comments about a new path forward for the organization.

"I am seeking the necessary support and alliances to create a constructive path forward for the organization and the many communities it serves," she said. "I believe that possibilities for transformation and renewal of the organization will be explored with individuals and groups who value the contribution Goodwill makes to the communities it serves."

She added that the current crisis "may present an opportunity for a transformation" that would allow Goodwill to "fulfill its mission in reinvented and empowering ways."

Mr. Ellickson said he did not know what sort of transformation was being contemplated, but the union had offered its support in the process.

"I don't know what that means exactly, but I've certainly offered our assistance and our participation in anything that would get the doors open," he said.

Ms. Nakamura also said a volunteer group of former Goodwill employees had set up a website at renewthegood.ca to try to raise $100,000 in donations to help workers who need urgent support for food, rent and medication.

Second Harvest, which provides food to social agencies in  Toronto, said Friday it will deliver food packages to 400 Goodwill employees, saying it "recognized an urgent need to help the workers."

Second Harvest said its trucks will deliver the food packages – each containing about 23 kilograms of groceries -- to employees at 15 Goodwill locations on Saturday.

DUCA Credit Union also announced it is donating $5,000 to Goodwill workers, and said it is working to set up a loan program for out-of-work employees.

DUCA chief executive officer Richard Senechal said his organization was in talks with Goodwill last month to co-ordinate work on a low-cost borrowing alternative to keep low-income people from turning to expensive payday lenders, but the plan was derailed by the organization's closure. Nonetheless, he said DUCA plans to create a loan fund for Goodwill employees who need access to funds to stay afloat until they can find a new job, and hopes to have it in place by Jan. 28.

Ms. Nakamura also asked the public to stop dropping off donated goods at Goodwill locations in Toronto and take them instead to other charities, such as the Salvation Army, the Society of St. Vincent de Paul or Habitat for Humanity. She said the Canadian Diabetes Association was collecting items that had already been donated.

Goodwill chapters operate independently, and the Toronto unit's closure has not affected stores in other regions.

Goodwill employees will not be paid this week, suffer a ‘devastating blow’
January 20, 2016 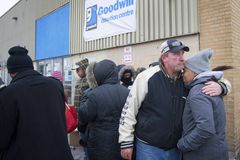 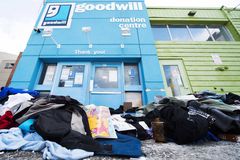 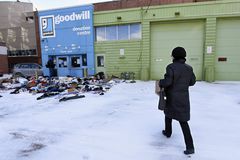