When she went to a medical appointment, Rebecca Brown used to pay $10 or $15 for a lift to the nearest community on the Yellowhead highway that runs through northern Saskatchewan. From there, she would flag down a Greyhound bus for the 200-kilometre trip to Saskatoon.

But the bus no longer picks up close to the Poundmaker Cree Nation reserve where she lives, tripling the cost for the 72-year-old to get to the nearest stop. It's the sort of impact that has played out in countless rural communities as weak ridership prompts bus providers, both public and private, to cut back on service.

In late August, only months after Saskatchewan cancelled a government-run rural bus service Ms. Brown had started using when her Greyhound stop disappeared, the company announced it would be seeking further cuts, this time in British Columbia. It wants regulatory permission to eliminate five bus routes on Vancouver Island and in northern B.C., citing declining ridership linked to subsidized competition and low gas prices.

Decades after the heyday of the highway coach, the proposed cuts are a reminder that even as Canadians are driving more and the bus is losing favour, it still matters to a lot of people. Left behind are those who don't have access to a vehicle, or those who prefer not to drive in remote areas alone in bad weather.

A 2010 report by Transport Canada warned that lack of transportation is "a top concern" for seniors in rural areas, a demographic that will gradually form a bigger share of the population.

"If even a portion of these older Canadians cannot or choose not to drive, communities will need to carefully rethink personal transportation options," states the report on sustainable transportation in small communities.

On top of its proposed cuts, Greyhound wants the option to reduce service on other B.C. routes, risking the sort of death spiral other transit agencies have experienced: As service is reduced, it becomes less of a viable choice, driving away riders who have options and making long-term service less certain for the remaining group of riders that relies on it.

"It's going to have a significant negative impact on the people who live in the area," said Jeannette Townsend, mayor of Valemount, B.C., which could lose its bus service. "It's a small town and it's far away from everything, except Jasper."

Greyhound executive Stuart Kendrick said that ridership has dropped on even the high-density corridors of British Columbia, making it harder to use those routes to help pay for the less-used ones.

"The ability to cross-subsidize the northern routes, the rural routes, just isn't there any more," said Mr. Kendrick, Greyhound's senior vice-president for Canada, adding in an e-mail that the company has "no immediate concerns about the long-term viability of our routes in other parts of the country."

Buses operated by Greyhound have served Canadians since 1929, stretching a web across the country that is unravelling a bit more with each cut.

There was a time – when roads were bad, air travel was expensive and private vehicles not as common – that the bus played a vital transportation role. It occupied a key place in the life of North Americans, with an importance that gave it a lasting presence in popular culture as well.

Although Jack Kerouac lamented the "feeling of sadness that only bus stations have," it was on the big vehicles that he did much of the trip fictionalized in On The Road. Greyhound was specifically name-dropped in songs by Bob Dylan and the Guns N' Roses video for Welcome to the Jungle begins with a wide-eyed Axl Rose getting off a bus in Los Angeles. A key section of the 1969 movie Midnight Cowboy played out on a bus, part of it parodied 25 years later by the television show Seinfeld.

Over time, the bus's prominence faded. Longer trips have become more affordable by plane, residents are more likely to own their own car and the roads are better. The bus gradually came to be seen as the less desirable alternative. But this shift did not reach all people equally. While the customer base for the bus may have shrunk, those who still rely on it will have limited alternatives if it disappears.

As the scope of Greyhound's services changes, Ms. Brown's experience in northern Saskatchewan illustrates the danger of the public relying on a subsidized alternative subject to the budget scrutiny of each successive government.

With the bus stop nearest to her gone, the retired teacher started paying as much as $50 for a drive to North Battleford. At first, she was able to take advantage of the cheaper bus option from there offered by the provincially run Saskatchewan Transportation Company. Earlier this year, though, the Saskatchewan government pulled the plug on its bus service, arguing it was costing too much for too few passengers, putting her back on the Greyhound.

"It's difficult to get around without a vehicle," she said, describing not having a car as a common situation among residents in her community. "There's quite a few, a lot of people."

Ms. Brown has a variety of medical conditions that need to be attended to in Saskatoon and expects to make at least two such trips before the end of October. Each will cost about $150.

"A lot of First Nations do utilize the [Greyhound] service, in terms of accessing safe transportation to urban centres," said Chief Terry Teegee, of the Carrier Sekani Tribal Council, which represents eight First Nations in the Interior of B.C. "I think that the more that service is cut, the more that people are going to risk hitchhiking."

In British Columbia, especially, this is not an abstract possibility. One of the routes Greyhound wants to cut serves what's known as the "Highway of Tears" between Prince George and Prince Rupert, where numerous Indigenous women have disappeared. A provincially funded service run by BC Transit operates along part of this route, linking some of its communities for a much lower fare than Greyhound charges. It does not serve the western half, though coverage of that area could come.

Robert Currie, a carpenter in Burns Lake, B.C., believes he has been seeing fewer hitchhikers since the BC Transit service started. His community would lose its Greyhound service under the proposed cuts and he fears that would prompt people to ride the BC Transit bus as far as they can and then start thumbing for a lift.

Greyhound stresses that nothing will change in the short run. It has to go through a regulatory process because a certain level of coverage is a condition to operate in the province. Permission to reduce that would have to come from the BC Passenger Transportation Board. The process could require public hearings and the company has said it won't change the current bus service this year.

But some residents say bus service has already reached the point where it's not practical for them.

Rebecca McElwain is the executive director of the Tansi Friendship Centre, a community non-profit in Chetwynd, B.C. The community would lose Greyhound service under the proposed cuts, but she said that the bus had already become too inconvenient for many locals.

"We don't often use the Greyhound because the scheduling is so poor," she said. "It's not a superviable option for many people." 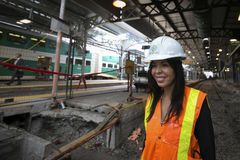 Integrated mobility is the next frontier in transportation, but are Canadian cities ready?
August 16, 2017 How a 73-year-old is hoping to link the GTA through water-based transportation
July 21, 2017
Follow Oliver Moore on Twitter @moore_oliver
Report an error Editorial code of conduct
Due to technical reasons, we have temporarily removed commenting from our articles. We hope to have this fixed soon. Thank you for your patience. If you are looking to give feedback on our new site, please send it along to feedback@globeandmail.com. If you want to write a letter to the editor, please forward to letters@globeandmail.com.
Comments