In the past, when the people of the Pacific Northwest wanted to celebrate someone or something of great significance, they erected a huge, decorative pole – a tradition that is about to return to part of British Columbia that experts believe hasn't seen anything like it in 130 years.

On Thursday, a 42-foot span of intricately carved red cedar – an additional eight feet of it underground – will rise above the rocky shoreline of Lyell Island in southern Haida Gwaii, the archipelago off the B.C. coast formerly known as the Queen Charlotte Islands.

It is called the "legacy pole" because it commemorates the anniversaries of two landmark agreements that led to the creation of the Gwaii Haanas National Park Reserve and Haida Heritage Site.

The sprawling preserve spans 1,470 square kilometres, or 15 per cent of Haida Gwaii. The islands have gone without a new pole so long because, more than a century ago, Haida carving almost died out – a victim of early missionaries, who suspected that it fostered paganism, and smallpox, a disease that claimed close to 90 per cent of Haida Gwaii's population in the late 1800s. Seeking strength in numbers, survivors abandoned what is now Gwaii Haanas, moving north to larger communities such as Skidegate and Old Masset.

More recently, the rekindling of Haida culture has sparked a revival of traditional carving, led most famously by the late Bill Reid. His work – familiar to any Canadian who has looked at the back of all but the most recent $20 bills – was inspired in large part by Charles Edenshaw, a legendary carver and artist who died in 1920.

To create the legacy pole, community leaders turned to a fellow member of the Haida's Eagle clan: Jaalen Edenshaw, a 33-year-old University of Victoria graduate and rising artistic star.

Last fall, he set up shop at the Haida Heritage Centre, a modern, glass-walled museum that sits dramatically overlooking the harbour in Skidegate. Its outdoor carving station afforded Mr. Edenshaw a view to the south of Gwaii Haanas, or 138 "beautiful islands," he was to commemorate.

Carved from a 500-year-old cedar cut near Port Clements on Graham Island (the largest in Haida Gwaii), the pole uses traditional symbols and imagery to depict what makes the park so special, how it came into being and what it means to those who fought to make it happen.

This year marks both the 25th anniversary of the South Moresby Agreement, which paved the way to creating the national park, and the 20th of the Gwaii Haanas Agreement, which enshrined a unique method for managing it.

Today, the park and heritage site are heralded as rare evidence that indigenous people need not be helpless in the face of resource extraction. But victory did not come without a struggle.

In 1985, simmering disputes over plans to log what is now Gwaii Haanas came to a head: Hundreds of Haida protesters and supporters ranging from artists such as Mr. Reid to politicians such as Svend Robinson, then a New Democratic Party MP, set up blockades on Lyell Island to keep loggers from going to work. Mr. Edenshaw was only a toddler, but remembers sitting at community planning meetings and watching elders head to the front lines, where they were among the 72 protesters arrested.

In the end, the Haida won the battle, if not the war. Their joint management of Gwaii Haanas with Parks Canada is "actually an agreement to disagree," park superintendent Ernie Gladstone says. Neither side has relinquished its claim to owning the land.

Where it all began

The pole will stand on an isolated stretch of Windy Bay on the east coast of Lyell Island, facing Hecate Strait, which separates Haida Gwaii from the mainland,

"It was a bit of a political statement, to put it there," the park's superintendent says.

"When the blockade was taking place, the logging company was moving into the Windy Bay watershed, one of the last on the island that was intact."

Loggers never reached the bay, which remains one of the most remote – and thus least visited – places in the park.

Magnitude-5.1 earthquake recorded off west coast of Vancouver Island
July 26, 2013
Opening date set for Bill Reid gallery
November 14, 2007
The Royal BC Museum: Getting the word out on ‘one of the world’s great treasure houses’
June 5, 2013 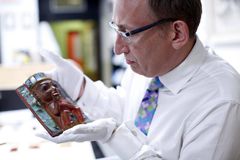