Hamilton agreed to move forward with a highly contentious $1-billion light-rail project after the province promised to work on extending the route.

After a series of marathon debates that didn't reach any conclusions, city councillors in Hamilton finally voted late on Wednesday to amend the project's environmental report and send it on to the province.

The decision keeps alive a project that many feared would fall victim to local opposition.

"This has been a 10-year process of getting us to this point," Mayor Fred Eisenberger said. "This is an investment that is going to change our community, for sure, but change it for the better."

Read more: Off the rails: What a billion-dollar LRT line means for Hamilton

As supporters exulted, even opponents conceded this decision pushed the project past the point of no return.

The debate had taken an increasingly nasty tone in recent months. And it is one that illustrates the difficulty of building transit in cities that have spent decades emphasizing the primacy of the car, particularly municipalities that are an uneasy amalgam of urban, suburban and rural areas.

"Are we a modern and cosmopolitan city that embraces public transit … or do we ignore that vital aspect of city building?" asked Councillor Aidan Johnson, an LRT supporter, as he addressed his council colleagues on the project.

About two and half hours later, the council voted 10-to-5 to proceed. A number of known opponents voted in favour, with some claiming the right to withdraw their support later.

"This is the right project – both for the city and for the wider region," provincial Transportation Minister Steven Del Duca said in a statement after the vote.

"We are pleased to see members of council taking another important step forward on this historic project."

The breakthrough came in a letter dated Wednesday from Mr. Del Duca, making clear that Queen's Park was open to adding another three kilometres to the 11-kilometre route. The province's working theory is that this can be done within the original funding envelope, now that a short second LRT line running down to the waterfront is no longer being planned.

The fact that Wednesday's vote, which would normally be a routine procedural decision, took on such outsized importance lays bare divisions within Hamilton.

Supporters of the LRT call it a key chance to revitalize the long-struggling downtown. Critics said that the project would suck up scarce tax dollars and damage traffic flow through the city.

Councillor Chad Collins, an LRT skeptic who ultimately agreed to back the project, decried the level of bitterness the debate had dredged up, even as it raised civic and political awareness in the community.

"We have a divided and split community," Mr. Collins said.

"Wherever this goes … it is taking a toll on my council colleagues."

Extending the route helped paper over some differences seen in Hamilton, though the issue could easily explode again. The question of who must pay if the project's costs rise is one that looms large. And next year's provincial election could put the project into play again.

But proponents of the LRT were full of praise on Wednesday.

Lynda Lukasic, a founder of the non-profit Environment Hamilton, said in a tweet that Eastgate, the proposed new terminus of the LRT line, has "one of the largest concentrations of transit users in Hamilton, and needs high-quality transit."

Insiders said the provincial government and the mayor's office had been working to find a way to satisfy enough to critics to get a majority at council.

"Given the funds made available from the removal of the LRT spur, I can confirm that the province will work to add the Eastgate extension to the current project scope and procurement," Mr. Del Duca said in his letter to Mr. Eisenberger, the Mayor. 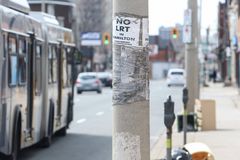 Montreal’s feel-good LRT comes courtesy of the taxpayer
Subscriber content
March 30, 2017
analysis
Time is of the essence in Eglinton Crosstown LRT fight
March 21, 2017
Follow Oliver Moore on Twitter @moore_oliver
Report an error Editorial code of conduct
Due to technical reasons, we have temporarily removed commenting from our articles. We hope to have this fixed soon. Thank you for your patience. If you are looking to give feedback on our new site, please send it along to feedback@globeandmail.com. If you want to write a letter to the editor, please forward to letters@globeandmail.com.
Comments