Elsley Foulds was with the 22nd Canadian Field Ambulance when he came ashore on June 6, 1944. The seawater was up to his waist and Allied guns and tanks were laying down a barrage as the Germans fired in return, creating a deafening din. He was 23 years old."You were scared but you didn't have time really to be scared. You had a job to do," said Mr. Foulds, of British Columbia. "It was rough. It was very noisy. We didn't have any armour of any kind – just a white band with a red cross on them and a red cross on my helmet."

He met his wife, Yetty, when the Canadians liberated Holland and they were married shortly after. His bride's dress was made from the silk of a soldier's parachute.

For veterans like Mr. Foulds, now 93, the memories of D-Day and its aftermath were made fresh again Friday as they converged on the beaches of Normandy to celebrate the 70th anniversary of the pivotal invasion that marked a turning point in the Second World War. Prime Minister Stephen Harper and other world leaders joined the veterans and their families on the sandy beaches in a sometimes awkward display of unity that failed to paper over the strains between the West and Moscow over Russia's aggression in Crimea.

About 14,000 Canadian troops came ashore at Juno Beach – part of a larger Allied force of 156,000 soldiers that rushed the northern French coastline on June 6. Before the weeks-long Battle of Normandy was over, Canada had lost more than 5,000 soldiers.

At international celebrations at Sword Beach, Western leaders including Barack Obama and Canada's Mr. Harper studiously avoided making contact in front of the cameras with Russian President Vladimir Putin, who was invited despite his seizure of Crimea in recognition of the tremendous sacrifice made by the Soviet Union in the Second World War.

Later, before thousands at Juno Beach, Mr. Harper celebrated Canada's part in the campaign that established a much-needed foothold in Western Europe, underlining the difficulties this country's troops faced.

"Poor weather had rendered ineffective the elaborate, pre-invasion naval and air bombardment intended to subdue the Nazi defences," the Prime Minister said. "Instead of landing amid smoking ruins and dazed defenders, the soldiers had no choice but to charge well-fortified guns … through the smoke, the minefields, the barbed wire, through the obstacles on the beaches, always under accurate and deafening mortar fire, and into the teeth of machine guns."

The Canadians' task was to seize the coastline fronting the villages of Courseulles-sur-Mer, Bernières-sur-Mer and Saint Aubin-sur-Mer and then push inland to capture the city of Caen, an important communications centre for the Germans. By evening of June 6, Canadian troops had progressed further inland than any of their Allies.

About 99 Canadian vets and dozens of allied veterans attended Juno Beach ceremonies in Courseulles-sur-Mer. Alan Canavan, 93, of Hampstead, Que., waded ashore at Normandy in mid-July, several weeks after the invasion began. As a 23-year-old with the 7th Canadian Reconnaissance Regiment, he disembarked his landing craft into seawater that came up to his knees. It was only a day before he came under fire from German mortars.

Mr. Canavan, one of a number of Canadian vets who received France's highest honour, the Legion of Honour, this week, said it was a "great shame how many young men lost their lives" in the Battle of Normandy, even though he feels it was a necessary sacrifice to rout the Nazis.

He said he's surprised how much more French schoolchildren know of the Second World War than their Canadian counterparts, adding "something should be done about it."

Alfred Weeks, 92, of Orillia, Ont., landed in Normandy several weeks into the assault. He was a 22-year-old radio operator in a tank which came under ambush in the Falaise Gap. "They put two holes in our tank before you could say 'scat.' My driver and co-driver were killed with one shot."

The Germans captured him, but days later he and fellow soldiers found a chance to escape and took it. The French hid them in a barn until they reunited with Canadian troops.

"There were tough things to do and we did them," Mr. Weeks said. "We might have been scared skinny but we still did them." 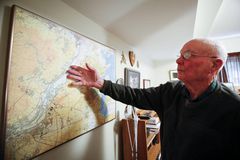