Animal advocates are calling for an end to the euthanization of healthy pets purely for their owners' convenience, a practice Canadian veterinarians acknowledge is an unfortunate fact of their profession.

"Unfortunately in law, animals are considered a property so what happens to them is up to what the owner decides," said Dr. Eric Carnegy, owner and senior veterinarian at the Carnegy Animal Hospital in Halifax.

"We live in a society where there are way more pets or animals looking for homes than there are homes And what do you do with them?"

Veterinarians' associations say fewer vets are willing to perform convenience euthanasia, but the profession does not prohibit it.

Canadian Veterinary Medical Association (CVMA) guidelines appear silent on what vets should do when owners ask to have apparently healthy family pets euthanized, although the group does include among its ethical principles a statement that "humane euthanasia of animals is an ethical veterinary procedure."

"I personally don't know of any veterinarian that would euthanize an animal based on convenience but I'm sure they're out there," he said in a phone interview.

Euthanasia is also not prohibited by legislation at the federal and provincial levels.

Camille Labchuk, an animal rights lawyer and executive director of Animal Justice, a Toronto-based advocacy organization, says it should be.

"If a child is in a situation where the parents can no longer care for that child whether the parents have financial issues, mental health issues, or they die, the government steps in and the state supports that child," she said during a phone interview. "Why we wouldn't do the same thing for vulnerable animals is beyond me."

Dr. Frank Richardson, president of the Nova Scotia Veterinary Medicine Association, said it is up to vets how to handle conversations about euthanasia.

"I hate to say it and I don't mean it derogatorily, but in some instances some owners consider them as disposable," he said. "I'm not saying it doesn't (happen) but ... society has changed their outlook on pets... that request is happening less and less."

Mary-Clare McLaren, a manager at Carnegy Animal Hospital, said reasons can vary for putting pets down.

Usually a pet is euthanized because it is sick and there is a quality-of-life issue, but she said that's not always the case.

"Unfortunately it might be monetary, it may be age, it may be moving. It can be a lot of reasons," she said.

The Carnegy clinic asks no questions of people who bring their pets in to be put down, she said.

"We get a lot of calls from a lot of people who aren't our clients who are in tears because they have been refused the service at another practice," she said, "We feel that ... it's their decision."

Dr. Paul Kendall, director of the Halifax Veterinary Hospital Group, comprised of three hospitals and about 40 medical staff, said they will not put an animal down for the owner's convenience.

"We've lost clients over the years because of it," he said. "I would probably have an uprising from my staff" if the clinics performed convenience euthanasia, he said.

If someone brings in an unwanted pet, clinic staff will try to adopt it out.

Kendall said he understands why convenience euthanasia happens, and won't criticize veterinarians who perform it.

If it looks to a vet like the animal might be killed inhumanely, he or she might justify euthanasia for its sake, Kendall says: "It's a real can of worms that one."

Many animal shelters have long euthanized unadopted animals, but the practice has fallen out of favour in recent years, and the national veterinary association's web site notes: "The CVMA believes that euthanasia is not desirable as a sole means of population control, but recognizes that euthanasia is still necessary for unwanted animals that cannot be placed in new homes."

Angela Welburn, the operator of Integrity's Haven Equine Rescue Centre in Chester Basin, N.S., said she started her animal rescue partly because she once met a woman at a Halifax vet clinic who wanted to put down an elderly dog so her kids could get a puppy.

"I take it personally, I get hurt by that. Would you do that to your mother and father?" she says.

"I am not against euthanasia but I don't agree that physically and emotionally healthy animals should be put down without having the option to be re-homed first."

She blames owners, and not vets, who she said are just doing their jobs. She also understands that animals with mental or behavioural issues need to be euthanized at times.

Dr. Bernard Rollin – a professor of philosophy, animal sciences and biomedical sciences at Colorado State University who has written extensively on animal rights and ethics – said there needs to be more emphasis on ethical training in veterinarian schools.

"Traditionally, pediatricians were advocates for children, and similarly, vets should be advocates for animals," he said. "There is no more pronounced advocacy then keeping them from being killed for frivolous reasons." 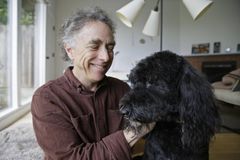 Canadian Veterinary Medical Association now opposes declawing cats
March 30, 2017
For Westminster dogs, there is no business like show business
February 13, 2017
Report an error
Due to technical reasons, we have temporarily removed commenting from our articles. We hope to have this fixed soon. Thank you for your patience. If you are looking to give feedback on our new site, please send it along to feedback@globeandmail.com. If you want to write a letter to the editor, please forward to letters@globeandmail.com.
Comments