Bricks are falling off, pigeons are coming in to roost, and the Roy Building, a fixture along Barrington Street, is being held together with "baling wire and memories," says urban planner Andy Fillmore.

Through 120 years, the six-storey office building on Halifax's main drag of commerce has attracted an eclectic clientele – a major law firm, accounting firms, NGOs, a tattoo parlour, a dressmaker and small start-up companies. In the past five years, it was a hub for Nova Scotia's TV and film industry. At any one time, there were about 80 small businesses, paying around $850 month-to-month for heat, light and the ambience – each with its own frosted glass and oak door, like in an old Bogart movie.

"Everybody felt like a private dick," says Geoff D'Eon, a film and documentary maker, who recently moved out of his fifth-floor office. "It was a character building full of characters. Each floor had a slightly different vibe."

But now the Roy Building is being demolished, making way for about 150 luxury condos and several floors of offices. The new building, to be called The Roy, will become one of the tallest in the city. Its redevelopment speaks to what is happening in Halifax: After more than two decades of neglect, and battles over height restrictions and heritage designations, Barrington Street is changing. The Roy is helping to lead the way – but also to create tension between those who want to see progress in a conservative city, and others who fear Halifax's rich history is disappearing.

James E. Roy was a 19th century piano and organ manufacturer who was also interested in real estate, according to a city planning document. He wanted to build an "immense building with four stores" on the ground floor and office space above.

The Roy Building's architectural style is described as "Restrained Classical" – a simple brick building with a "rhythmic" arrangement of windows on the upper levels. It was built in three waves: two storeys in 1896; rebuilt after a fire to four storeys in 1919; and then two more storeys in 1928.

But it has been neglected – just like the street, which is designated a heritage area.

Mr. Fillmore, vice-president of planning and development for Waterfront Development Corp., and former manager of urban planning with the city, says there has been no significant investment on Barrington for 25 years because of complicated development processes that were unclear and conflicting about how to preserve heritage buildings and how tall buildings should be.

The Harvard-educated planner says there were up to 70 separate policy statements dealing with height limits. Many Haligonians hold sacred the views of their harbour from historic Citadel Hill. The conflicting policies led to appeals, counter-appeals and, eventually, inertia. Mr. Fillmore blames this in part on the "conservative complacency" in the city – but believes it is "shifting quickly and positively right now."

A downtown plan, adopted in 2008, clarified development rules, putting a 22-metre limit on Barrington Street. The new Roy building will soar above that – 24 storeys high – because the development was adopted before the new height restrictions took effect.

The new building will emulate the old for the first few storeys, but then shoot skyward with a residential tower. "The feel of it, the integrity of it and the structural elements … we are going to not only keep but enhance," says Louis Reznick, the developer who owns the Roy Building. He says the new building will cost "north" of $50-million.

"It will be the highest and last one to be built in the downtown of that height. So the views for the residential tower will be … unparalleled," Mr. Reznick says.

Phil Pacey, with the Heritage Trust of Nova Scotia, says his group argued against allowing the new Roy building to go ahead.

"What's been found right across the country is that heritage conservation districts tend to increase property values because they provide a good consistent set of rules," he says. "If exceptions are made, then it takes away from the authenticity of the street and it also leads other property owners on the street to think, 'Well if they're doing it, why shouldn't I do it?' and apply for plan amendments."

Mr. Fillmore, however, believes neighbourhoods should not be kept depressed for the sake of a "romantic ideal of the past."

As for documentary-maker Mr. D'Eon, he'll miss the characters who made the building unique. "It's not as if it was an architectural jewel," he says. "In fact, most people in Halifax would walk by and not even notice the place." Still, he adds: "They don't make office space like that any more. Not here. Not anywhere."

How Halifax’s waterfront will honour a historic sea battle on land
January 27, 2014 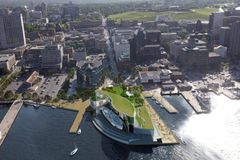 Here’s a home that clasps the Nova Scotia shore in a rocky embrace
January 23, 2014 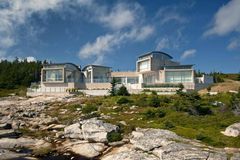 Architects and designers embrace compromise with the half-open house
February 19, 2014 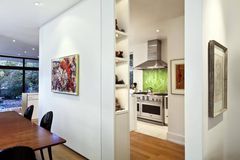