James Keegstra believed that he had God and the Bible on his side, but he was also an unrepentant Holocaust denier who, for 14 years, demonized Jews and spun conspiracy theories in the high-school classes he taught in rural Alberta.

Criminally charged with promoting hatred, he fought a prolonged court battle that lasted as long as he had been teaching.

It led a divided Supreme Court of Canada to uphold the country's hate speech law, deeming it a reasonable limit on free expression.

Mr. Keegstra died on June 2 at the age of 80, the Red Deer Advocate reported late Thursday. No cause of death was given.

Through the 1980s and early 1990s, Mr. Keegstra and other deniers such as Ernst Zuendel and Malcolm Ross grabbed headlines as the country debated whether prosecuting them was necessary or only gave them a soapbox and the prestige of martyrdom.

Until his views were exposed, Mr. Keegstra had also been mayor of Eckville, population 760.

He was well-liked by many students, but he also taught them Jews were "money thugs" and "gutter rats" who tried to control the world.

Two criminal trials and a visit to Dachau did not dilute those views. As a 1983 Globe and Mail editorial noted, he seemed "impervious to the urgings of decency."

He was born in Vulcan, Alta., on March 30, 1934, the youngest of the seven children of Dutch immigrants who ran a dairy farm near the hamlet of Kirkcaldy.

After high school, he worked as a mechanic and attended the Calgary Prophetic Bible Institute. Another influence was the Social Credit doctrine of the 1940s, with its distrust of bankers.

After earning a bachelor of education degree, he moved to Eckville in 1968 to teach. Although he was certified only as an industrial arts teacher, he taught social studies because the school was short-staffed.

It was around that time that he had what he later described as an awakening about the Jews. "Here was a people who denied everything about Christ, yet they were called the chosen people. That is a contradiction," he recalled in an interview with Saturday Night Magazine.

Former students later testified that he told them that Jews were responsible for human sacrifices during the French Revolution; that women's liberation, abortion and atheism were part of a Jewish cabal; that the Vietnam War and the Watergate scandal were also caused by Jews, and that Pierre Trudeau had been groomed to obey the Jewish conspiracy.

He used a common trope of deniers, claiming that many Jews indeed died during the Second World War, but not from gassing, thus diminishing the genocidal nature of the Shoah.

Disagreeing with him meant a failing grade. "If you wrote on the Jewish conspiracy … then you passed. If you wrote against it, then your mark wasn't the best. Everyone knew it," former student Blair Andrew told the court.

There were complaints about his teachings as early as 1978, but Mr. Keegstra was fired only in December, 1982. A year later, he was charged with unlawfully promoting hatred.

He and his pugnacious lawyer, Doug Christie, very much used the court case as a platform.

During preliminary hearings, Mr. Christie refused to ask for a publication ban. At trial, he tried to call then premier Peter Lougheed as a witness. Mr. Keegstra was in the witness box for 26 days, allowing him to expound at length about his theories and the pamphlets and books that inspired him.

Mr. Keegstra immediately said he would appeal and, later that year, flew to West Germany. Touring Dachau "confirmed what I already said, that it's not a mass extermination centre," he said afterward.

He did not mention that Dachau, as a concentration camp, was a ghastly place but not a site of industrial-scale genocide like Auschwitz or Treblinka.

In any case, he had never intended to visit the sites of the extermination camps that Nazis operated in occupied Poland. "That's communism. Everything you'd be told would be lies," he said.

Three years later, the Alberta Court of Appeal quashed the 1985 conviction. On further appeal, the Supreme Court found that the hate law was constitutional and a reasonable infringement of his freedom of speech. "This is the end of freedom in Canada," he said. "We have become a communist country."

Meanwhile, his home had been targeted by arsonists. A letter writer to The Globe mockingly quipped, "I don't believe it was arson. In fact, I don't believe there was a fire."

After more appeals, he was sentenced by the Alberta Court of Appeal to a one-year suspended prison term and 200 hours of community service.

"Keegstra is not a harmless eccentric," the court ruling said. "[He] would have us all believe all manner of hateful things about the Jewish people. … There is only one word to describe such behaviour. It is so perverse that it is evil."

The judicial battle had stretched 14 years and cost the government of Alberta an estimated million dollars.

Having made judicial history but still unremorseful, he kept a low profile this time.

He worked as a mechanic and more recently had been a handyman, the Red Deer Advocate reported. 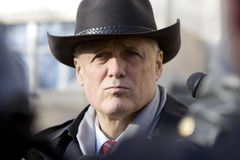