Canada's North has never been at greater risk. Treasure seekers flying U.S., Russian and Danish flags are energetically disputing our claims to sovereignty and we can be sure that China, India and doubtless others are not far behind.

This week, the Canadian Forces launched Arctic Ram, the "biggest and most complex exercise" ever mounted in the Far North, to "reacquire winter soldier skills." The army says, "We need to be able to shoot, move and communicate" in harsh conditions.

Flexing our northern muscle is fine, but we need to make use of every weapon we have to protect our Arctic border.

Non-aboriginal claims to sovereignty in North America have been based mostly on exploration and occupancy by Europeans in the past millennium. Although our leaders ought to be making a case for Canada's possession on this basis, little has been done despite convincing evidence of very early "discovery" and settlement by visitors from the British Isles as early as the sixth century.

For three-quarters of a century, I have been investigating early European ventures to what is now Canadian territory and have published two comprehensive studies on the subject: Westviking: The ancient Norse in Greenland and North America (1965) and The Farfarers: Before the Norse (1998). They demonstrate that in all probability the Norse (currently the first choice as discoverers of Canada) were, in fact, relative latecomers.

However, those charged with defending Canada's claims to northern sovereignty seem to have resolutely ignored this possibility in favour of accepting the claim that the Norse were the first discoverers of our country.

They are doing this in spite of much new evidence. Some of this is coming from the Canadian Museum of Civilization, one of whose archeologists, Patricia Sutherland, has been digging ancient habitation sites on Baffin Island and Labrador. She has found many prehistoric artifacts with a mix of aboriginal and European characteristics. And although radioactive dates cluster around the arrival of the Norse circa 1000 AD, some are several centuries earlier.

Among her finds are yarns and cloth made not from goat or sheep fleece, as would have been the case had they come from Europe or Greenland as trade goods, but from wild animals including Arctic hare and white fox, which are indigenous to Canada. The most probable explanation is that they were produced in situ, either by European women living there or native women who learned their techniques.

There are many other indications of a relatively intense and long-lived European presence. Artifacts found near Dr. Sutherland's Baffin Island sites include such signature objects as tally sticks (widely used in ancient Europe), whetstones of early European pattern, bone and wooden figurines dressed in early European style (one with a cross carved on its chest) and stone structures of European character. One ruin protected the fur of a house rat not native to North America but a frequent hitchhiker on ships from Europe.

However, perhaps the strongest evidence of a significant and enduring early European presence lies in more than 100 low-walled (about a metre high), boat-shaped enclosures scattered singly and in small groups across Canada's Eastern Arctic.

Many historians who reject the possibility of a European presence in the region before the arrival of the Norse refer to these peculiar enclosures as native-built "longhouses," although they bear little similarity to the classic longhouse of archeology. For one thing, they show no evidence of ever having had a roof. So what were they for? Some have concluded that they weren't for human habitation but may have served some mysterious ceremonial purpose.

Archeologist Thomas E. Lee, also of the Museum of Civilization, excavated several longhouses in the sixties and seventies, and was certain that they were habitations even though he couldn't determine how they might have been roofed.

He died before he could find the answer, but, as I have detailed in The Farfarers, I followed his lead and discovered that these longhouses are virtually identical in plan, size and materials to buildings once numerous in northern Britain, especially Orkney and Shetland., some still inhabited, and which were roofed by overturning large boats on the stone walls. Originally, these boats were sheathed with sea-mammal hides (especially walrus and seal), which, being semi-translucent, admitted light and were almost perfectly waterproof.

The houses are just part of a significant body of evidence that testifies to a strong European presence in the Canadian Arctic as early as the sixth century – a presence that probably still endures in people of mixed heritage and culture in the region.

This evidence continues to accrue and, with a little more time (and digging), it will soon be apparent that Canada's claim to sovereignty was established well over 1,000 years ago. Once this fact is recognized in international law, we won't need to establish it by force of arms. 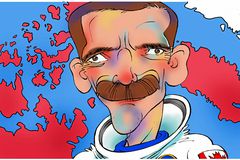 So Farley, so good
December 12, 2008
Follow us on Twitter @globeandmail Opens in a new window
Report an error Editorial code of conduct
Due to technical reasons, we have temporarily removed commenting from our articles. We hope to have this fixed soon. Thank you for your patience. If you are looking to give feedback on our new site, please send it along to feedback@globeandmail.com. If you want to write a letter to the editor, please forward to letters@globeandmail.com.
Comments